A 63-year-old man in Germany who contracted a rare bacterial infection after being licked by his dog has died, prompting doctors to caution pet owners to be aware of any unusual symptoms.

According to a new case report, the patient presented at Red Cross Hospital in Bremen, Germany only after three days of severe symptoms. Initially, he had experienced flu-like symptoms, including elevated temperature and difficulty breathing.

But the day before he went to hospital, his symptoms took a nosedive. A rash had bloomed on his face, and he was experiencing nerve and muscle pain in his legs. Closer examination revealed subcutaneous bleeding on his legs.

In addition, he had kidney injury and liver dysfunction, as well as hypoxia, lack of bloodflow to the muscles, and he wasn't urinating.

His medical team were at a loss - the patient didn't have the headache or stiff neck associated with meningitis, nor had he travelled anywhere he could have contracted an exotic infection.

The doctors diagnosed him with a severe blood infection caused by the body's immune response (sepsis) and purpura fulminans, a blood clotting disorder that causes skin discolourations (warning: graphic photo of the man's arm below).

He was treated with an antibiotic cocktail designed to cover Streptococci, Neisseria meningitidis, Haemophilus influenza and Staphylococcus aureus, but his symptoms continued to decline - he even went into cardiac arrest, but was successfully resuscitated. After that, he was intubated and put on a respirator.

It wasn't until the fourth day of his hospitalisation that the doctors finally isolated and identified the culprit: a bacterium called Capnocytophaga canimorsus.

This is not a rare microbe; in fact, it's a normal and healthy member of the gingival flora in cats and dogs around the world. It is only transmitted to humans very rarely, and then it is usually through dog bites to immunodeficient or otherwise compromised patients, such as alcoholics.

The man had not been bitten or otherwise injured by his dog, nor was he immunodeficient or otherwise compromised; in the weeks preceding his illness, his dog had only licked him. But in this case, it was enough. 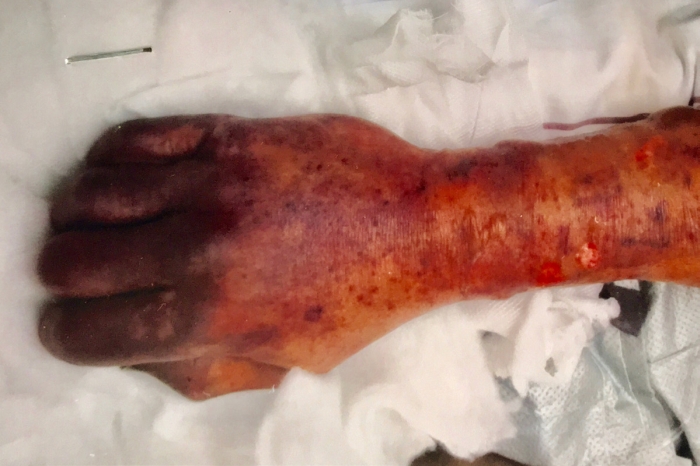 Over the days following his diagnosis, in spite of an adjusted treatment regime, his condition worsened. Multiple organs failed, and he contracted pneumonia. On the 16th day after admission, he died of severe septic shock.

According to the medical literature, around 25 percent of reported cases of C. canimorsus infection in humans are fatal. It is possible, however, the doctors noted, that these numbers are not indicative of the real world, and that many cases are never reported, since the infection could come and go without the patient ever thinking they have anything other than a flu.

However, this case does show that, even among the rare cases reported, there are outliers, and both doctors and patients need to be aware of this.

"Pet owners with flu-like symptoms should urgently seek medical advice when their symptoms exceed those of a simple viral infection, which in this case were severe dyspnoea [difficulty breathing] and petechiae [red rash caused by broken blood vessels]," the researchers wrote in their case report.

"Physicians confronted with such patients should ask about contact with dogs and cats. They should consider C. canimorsus infections also in the presence of purpura fulminans and the absence of animal bites or scratches, and any immunodeficiency.

"In such cases, the clinician should immediately start empiric treatment with a penicillin in combination with a beta-lactam inhibitor until a definite diagnosis is established."

The case has been reported in the European Journal of Case Reports in Internal Medicine.