'A Chronic Lack of Fire': The Paradox Fueling Megafires in The US

After so many smoke-filled summers and record-setting burns, residents of Western North America are no strangers to wildfires.

Still, many questions are circulating about why forest fires are becoming larger and more severe – and what can be done about it.

Is climate change fueling these fires? Does the long history of fighting every fire play a role? Should we leave more fires to burn? What can be done about Western forests' vulnerability to wildfires and climate change?

We invited 40 fire and forest ecologists living across the Western US and Canada to examine the latest research and answer these questions in a set of studies published 2 August 2021. Collectively, we are deeply concerned about the future of Western forests and communities under climate change.

So, why are wildfires getting worse?

Climate change is a big part of it. Summer wildfire seasons are already 40 to 80 days longer on average than they were 30 years ago. Annual droughts are more pronounced, making it easier for fuels to dry out and fires to ignite and spread.

Extreme weather events, marked by dry fuels, lightning storms, and strong winds, are also increasingly common and provide essential ingredients for rapid fire growth, as witnessed by the Bootleg Fire burning in Oregon and record-setting fires in California and Colorado in 2020.

Ironically, a chronic lack of fire in Western landscapes also contributes to increased fire severity and vulnerability to wildfires. It allows dry brush and live and dead trees to build up, and with more people living in wildland areas to spark blazes, pressure to fight every forest fire has increased the risk of extreme fire.

Above: Data show the total number of fires has decreased in the US since 1980, but those fires are burning more land.

The problem with fighting every wildfire

Historically, fire was a regular visitor to most Western forests, except moist locations like those along the Pacific Northwest coast and in British Columbia. Frequent or periodic fires from Indigenous burning and lightning strikes created patchworks of grasslands, shrublands, and regenerating forests of all ages.

Past fires influence the way subsequent fires burn and what they leave behind. For example, Indigenous burning practices not only enhance cultural resources and wildlife habitat but also reduce the amount and connectedness of fuels that drive large, severe wildfires.

Similarly, patchy burns from lightning ignitions create forest landscapes that are less likely to burn all at once. 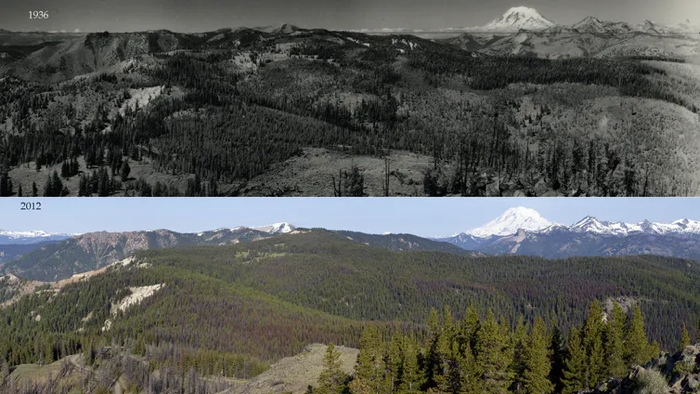 Above: Photos of Bethel Ridge, a moist mixed conifer forest in eastern Washington, show the difference in patchiness in 1936 compared with 2012.

The US and Canada effectively suppress all but 2-3 percent of wildfire starts. However, this small percentage of fires burn at the height of each fire season, when dry conditions and extreme fire weather thwart even the most aggressive attempts to suppress them.

Unintentionally, by focusing on short-term risks of wildfires, the US is predisposing forests to burn under the very worst conditions. Active fire suppression contributes to what is often referred to as the wildland fire paradox – the more we prevent fires in the short term, the worse wildfires become when they return.

In one of the new studies, Paul Hessburg and co-authors explain how fire managers can mitigate the severity of future fires by managing fire-excluded forests to foster resilience to wildfires and drought.

In a second paper, Keala Hagmann and her co-authors describe how more than a century of fire exclusion and past forest management practices have jeopardized forest biodiversity and social and ecological values, including culturally important resources, the quantity and quality of water, stability of carbon stores, recreation, and air quality.

Amid the daunting reality of climate change and severe wildfires, there is a path forward for Western forests.

In a third article, Susan Prichard and her co-authors examine which adaptive forest management approaches have worked to increase resilience to wildfires and climate change.

However, land managers can't expect these treatments to work if they are applied to only a small fraction of Western forest landscapes.

When combined, forest thinning and prescribed burning in dry ponderosa pine and in dry and moist mixed-conifer forests have been shown to be highly effective at reducing the fire damage to forests.

However, this type of treatment is not appropriate for all forest types. Fire managers in some wilderness areas and national parks have allowed fires started by lightning to burn in some wind and weather conditions.

Over the past 40-plus years, these wildfires have been allowed to burn and reburn landscapes, generally limiting the size and severity of subsequent wildfires.

Given the immense diversity of Western forests, there is no one-size-fits-all solution. However, in forests that historically supported more frequent fire, revitalizing and continuing cultural burning practices, prescribed burning, and forest thinning combined with prescribed burning can reduce overcrowding and the potential for severe fires.

Thinning and prescribed burning aren't appropriate or feasible everywhere. In reality, only a portion of landscapes can be treated this way. Allowing wildfires to burn in more areas under moderate weather conditions is also part of the solution.

Promoting resilient Western forests will require that our society builds a new relationship with fire by creating fire-adapted communities and looking for opportunities to restore fire to Western forest landscapes.

In this era of warmer, drier summers and longer fire seasons, there are no fire- or smoke-free solutions. The current approach to fire management poses unnecessarily high stakes for Western forests.

There is no doubt that the future of Western forests is a fiery one. How we choose to live with fire is still up to us.