This Flat-Earther Finally Launched Himself Off Earth, And Came Back Down Again

Mike Hughes, a California man who is most known for his belief that the Earth is shaped like a Frisbee, finally blasted off into the sky in a steam-powered rocket he had built himself.

The 61-year-old limo driver and daredevil-turned-rocket-maker soared about 1,875 feet (571.5 metres) above the Mojave Desert on Saturday afternoon, the Associated Press reported.

Hughes's white-and-green rocket, bearing the words "FLAT EARTH," propelled vertically about 3 pm Pacific time and reached a speed of about 350 mph (563 km/h), Waldo Stakes, who has been helping Hughes, told the AP. 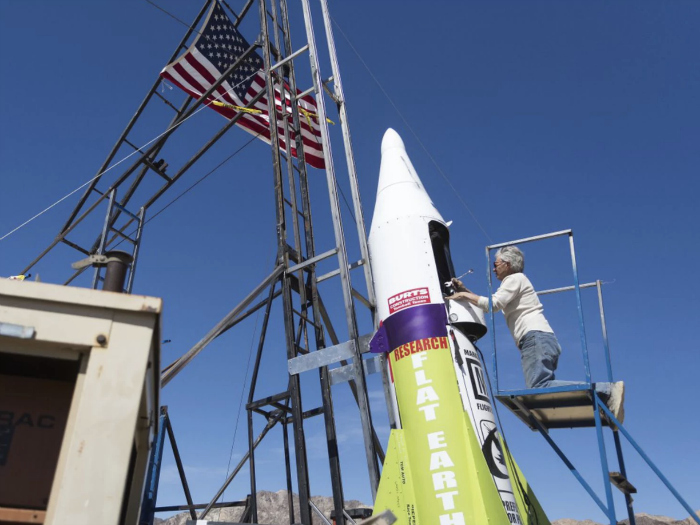 Hughes deployed two parachutes while landing, the second one just moments before he plopped down not far from his launching point.

A video shows that the whole endeavor, from the moment his rocket went up to the moment he landed, lasted about a minute.

The vertical launch, which happened without a countdown more than 200 miles (322 km) east of Los Angeles, came amid growing skepticism that Hughes would ever lift himself off.

The launch had been postponed multiple times, partly because Hughes said he couldn't get permission from a federal agency to conduct it on public land.

After he landed Saturday, Hughes told the AP that he was "relieved" but that he expected to feel the physical toll of it all the next day.

"At least I can go home and have dinner and see my cats tonight."

He also said he'd been frustrated with assumptions that he "chickened out," so he "manned up and did it".

Hughes had been on a mission to prove that the Earth is flat and that NASA astronauts such as John Glenn and Neil Armstrong were merely paid actors performing in front of a computer-generated image of a round globe.

His previous failed attempts, as well as the successful one on Saturday, are all part of his ultimate goal to propel himself at least 52 miles (83.6 km) above Earth by the end of the year – and to prove once and for all that the planet is flat.

Hughes had initially planned to launch his rocket in November 2017, but he postponed it, claiming the Bureau of Land Management told him he couldn't do so on federal land.

A spokeswoman for the agency, however, said its field office has no record of speaking with Hughes.

The launch was postponed again later that month, as Hughes moved his launching point to a private property near Amboy, California, an unincorporated community in the Mojave Desert.

"It's still happening. We're just moving it three miles down the road," Hughes told The Washington Post in late November, as he hauled the rocket to the new spot.

"I don't see [the launch] happening until about Tuesday, honestly. It takes three days to set up ... You know, it's not easy because it's not supposed to be easy."

In February, Hughes finally attempted his flight, but his rocket didn't ignite. He blamed technical difficulties.

To Hughes's credit, he has shown some skills in building rockets. He set a Guinness World Record in 2002 for a limousine jump, according to Ars Technica, and has been building rockets for years, albeit with mixed results.

He built his first manned rocket in 2014, the AP reported, and managed to fly a quarter-mile over Winkelman, Ariz. 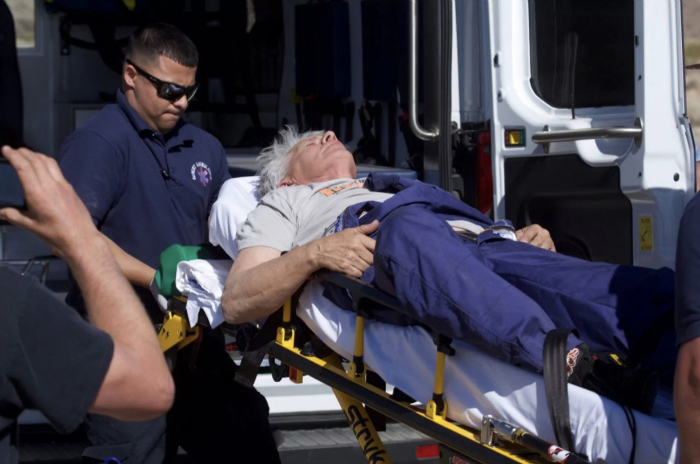 According to the AP, Hughes's hard landing on Saturday left him injured, though it is unclear what type of injuries he suffered. Photos show paramedics carrying Hughes on a stretcher and into an ambulance.

Also among Hughes's plans – aside from trying to get to space – is to run for governor.

This article was originally published by The Washington Post