After dealing with an irritating itch in his right eye for several hours, a 53-year-old gardener presented to the emergency department, hoping for some fast relief.

It began with something briefly touching his right eye as he worked outside one morning, near a horse and sheep farm in France. It ended in a story most people won't want to hear at the dinner table.

The New England Journal of Medicine case study, published by doctors from the University Hospital of Saint-Etienne, is light on detail, so we'll never know exactly how medical staff at the university hospital broke the news of the man's diagnosis.

It probably went something like, "you've got baby flies doing breast-stroke across the surface of your eyeball. About a dozen, in fact. Yes, they're very cute – I'll take a photo. You want a video too? Sure! Now, just let me grab my tweezers and I'll have them out in a blink!" 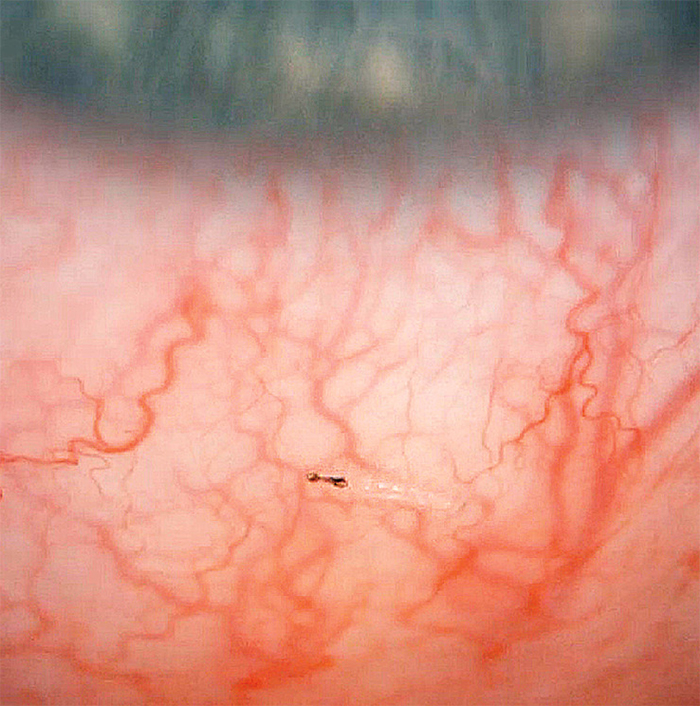 Fly mothers are usually rather discerning with where they drop off their kids, and the parasitic sheep bot fly Oestrus ovis is certainly no exception, typically choosing to lay eggs in the moist confines of an animal's nostril.

From there, a one-millimeter-long maggot wriggles free and uses its bands of body spikes and tiny mouth hooks to drag its way through the mucus into the animal's sinus, where it feeds, grows, and develops in warmth and comfort.

Weeks later, the greatly-fattened larva heads back down the passage, drops to the ground, and pupates to become an adult again, which then mates and triggers the whole cycle anew.

That's plan A, at least. Plan B, it seems, is to haphazardly squirt your batch of eggs into the nearest human eye and then run off for an afternoon of pina coladas.

Sheep noses and human eyes are very different organs. Our blinkers don't even make for good fly nurseries, a fact that thankfully limits the carnage these horror-show infestations might cause.

As unpleasant as the idea of having a nursery of spiky maggots rolling around in your cornea might be, it's an irritation that rarely results in long-term damage.

Whatever the reason might be (whether by amusing themselves or through sheer confusion), time and time again sheep bot flies have been documented offloading their eggs on human faces, giving rise to cases of what's known as ophthalmomyiasis all over the globe.

In fact, in parts of the world where sheep bot flies are widespread, the annual incidence of eye infestation by O. ovis could be as high as 10 out of every 100,000 people.

Treatment is usually a straightforward case of physically removing the offenders and sending the patient home with topical drops to ward off infection.

Which is exactly what happened in the case of our unfortunate French gardener. Ten days after the wrigglers were fished out of his right eye (and after a course of antibiotics), he was ready to return to the garden, presumably sporting a new pair of protective eye gear.

This research was published in the New England Journal of Medicine.