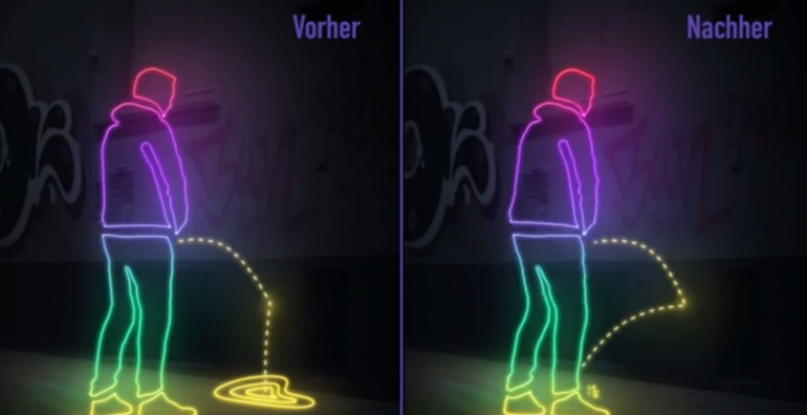 What do you do when you're sick of drunk people urinating on the walls of your city, stinking the place up? Well, if you're as savvy as the community of St Pauli, the red light district in the Germany city of Hamburg, you turn to science.

The district, which is one of the main party areas in the city, has now sprayed its most-frequented walls in hydrophobic paint, which is so repellant to liquid that it rolls, or sometimes bounces, right off the surface. This means that now when someone pees on one of these walls, the wall pees back.

As you can see in the video below, this paint is pretty powerful stuff, and it's capable of sending a jet-stream of pee right back onto the shoes of the urinator (which the Germans call "wildpinkler" or "wild urinator" in English). It's like immediate karma, and we love the idea so much.

The locals are hoping that not only will the paint get the message out there loud and clear that walls aren't for pissing on, but they also hope that it will help keep the area looking (and smelling nice) for longer.

The downside is that the hydrophobic paint is pretty expensive - the organisers told Reuters that it cost around A$700 to spray a six-square metre area. But they believe the costs will balance out with the drop in cleaning costs.

"If you compare the work involved for daily cleaning of the mess and the awful smell, as well as all the collateral damage involved, it has definitely been well worth it," Julia Staron, who organised the resident group, told Reuters.

And maybe, just maybe, the splash-back effect will be enough to get guys (and girls) to use toilets when drunk, not any old alleyway they stumble down.

In the meantime, we'd sadistically love to see someone try to pee against this laser-etched super-hydrophobic metal created earlier this year. Because liquid sure can bounce off of that bad boy.