This Gigantic, Extinct Devil Frog Was Capable of Eating Dinosaurs

A giant, beach ball-sized frog that lived 70 million years ago had a bite that would have been strong enough to snap up small dinosaurs.

Beelzebufo ampinga was the largest frog to have ever lived - at least that we know of. But it was similar to the modern Ceratophrys frogs, and now scientists have used those similarities to make a fascinating discovery.

Ceratophrys frogs are also known as Pacman frogs, for their round bodies and almost comically large mouths. They're grumpy creatures, sitting quietly in wait and snapping at anything that passes by with force.

It's these Ceratophrys frogs that researchers studied to determine the bite force of Beelzebufo.

They used a custom-made force transducer, two plates covered with leather. When the frog bites down on the plates, they act as scales that can accurately sense the force of the bite. 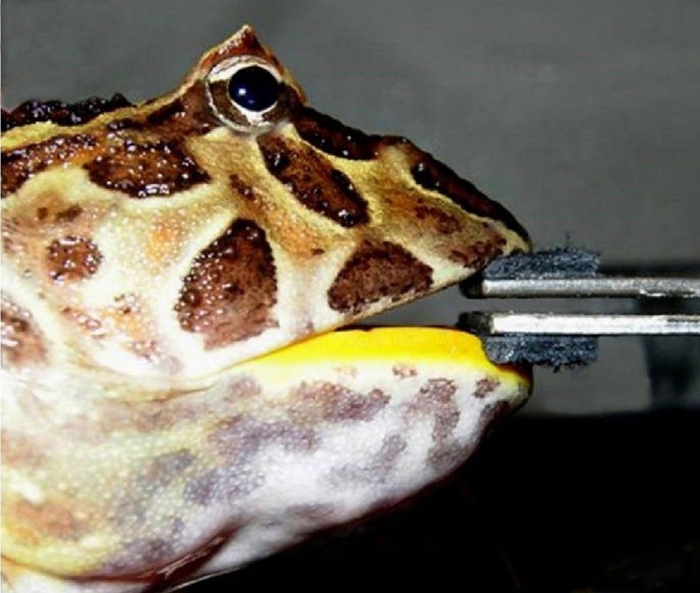 A Ceratophrys frog with a head width of 4.5-centimetre (1.8-inch) has a bite force of 30 Newtons, or approximately 3 kilograms (6.6 pounds). This allows the frog, once it has captured its prey with its sticky tongue, to tightly secure the wriggling food between its mighty jaws, clamping down and not letting go.

"Unlike the vast majority of frogs which have weak jaws and typically consume small prey, horned frogs ambush animals as large as themselves – including other frogs, snakes, and rodents. And their powerful jaws play a critical role in grabbing and subduing the prey," said researcher Marc Jones of the University of Adelaide and the South Australian Museum.

Scaling that bite force up for frogs with mouths around 10 centimetres gets a force of 500 Newtons, or around 50 kilograms (110 pounds). There are large horned frogs this size living in South America, and that bite force is consistent with turtles, crocodilians and predatory mammals of the same mouth size.

The scaling method used to determine the bite force of these larger frogs, linking bite force to body and head size, is also consistent with results found for other animals, including fish, reptiles and rodents.

Comparable to a snapping turtle with a head the same size, and more than enough to fracture a human finger, so you wouldn't want to be trying to pet it.

"At this bite force, Beelzebufo would have been capable of subduing the small and juvenile dinosaurs that shared its environment," Jones said.