Scientists are being forced to evacuate the Halley VI Research Station in East Antarctica after a huge crack in the ice nearby doubled in length in less than three months.

The move comes only weeks after the facility began relocating in response to another threat: a huge chasm opening to the south, which threatened to the cut the station off from the rest of the shelf and cast it adrift.

"We want to do the right thing for our people," says British Antarctic Survey (BAS) director of operations Tim Stockings. "Bringing them home for winter is a prudent precaution given the changes that our glaciologists have seen in the ice shelf in recent months."

Those changes highlight just how difficult and potentially dangerous life in this most inhospitable region of the world can be.

Fortunately, the Halley VI station, which is made up of eight separate modules, can be deconstructed and towed on ski-fitted hydraulic legs, which means it can be moved around cracks in the ice as they appear. 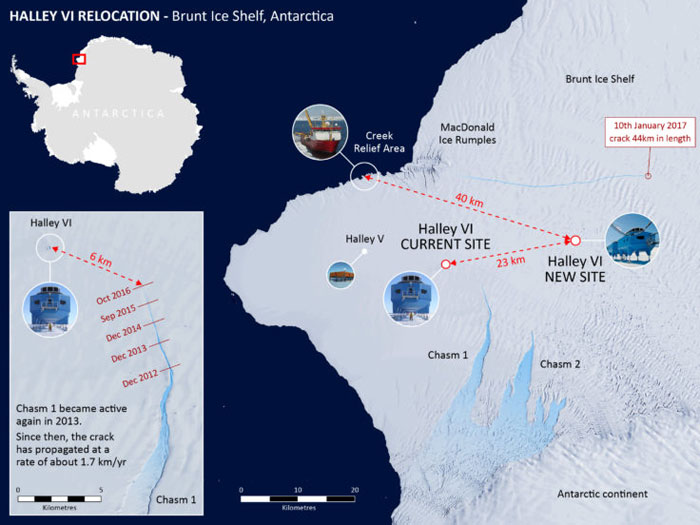 That's why when a dormant chasm in the Brunt Ice Shelf (called Chasm 1) started to show new signs of activity in 2012, there was no initial panic.

The slow rate at which the chasm developed – about 1.7 kilometres (1 mile) per year – meant the BAS had enough time to decouple Halley VI's modules and tow them to the east.

By shifting the station 23 kilometres inland on the shelf, the idea was to put Halley VI out of harm's way, just in case the chasm continued to open and ended up cutting a huge section of the ice shelf loose.

That relocation effort began in December last year, and is now in its final stages, with just one module still being towed to its new site.

But before anybody can break out the champagne, the emergence of a new, much faster-developing crack to the north of Halley VI has now made the situation even more unpredictable.

This new crack – called the Halloween crack, after it was discovered on 31 October last year – measured 22 kilometres when the researchers became aware of it.

But in a little over two months, it's now extended to a rift measuring some 44 kilometres in length, and nobody knows just how it will develop from this point on.

The researchers have monitored the Halloween crack with GPS instruments, satellite images, radar, and on-site drones – and ran computer modelling to try to predict how it will extend further – but they say they can't be sure just how long it will become.

The team thinks it's unlikely the crack will calve a large chunk of iceberg off the larger ice shelf – but with Chasm 1 also still active, there are simply too many unknowns for them to stay on at Halley VI as winter descends.

There are currently 88 people on the station, but that number was set to drop to just 16 scientific staff who were scheduled to remain on in the 2017 winter. During those months, the station operates in extreme cold (from –20°C to –55°C) and 24-hour darkness.

Unfortunately, if the worst were to happen, and either Chasm 1 or the Halloween crack – or perhaps some other, unforeseen danger – were to imperil Halley VI during this time, those winter conditions could make a rescue attempt impossible.

All researchers will now have to abandon the station by March until the summer resumes in November.

"What we've decided is that given the unpredictability, combined with our inability to do anything about it in winter – no aircraft in the continent, it's dark, it's very cold, all those kinds of issues – then actually the prudent thing to do is withdraw our staff, close the station down in a controlled manner and then go back in next summer," Stockings told Jonathan Amos at BBC News.

While no scientific staff will be able to stay at Halley VI during the winter, the BAS says it will look at whether it can keep any of its climate-monitoring equipment running autonomously during the winter – in addition to keeping tabs on sensors measuring the development of the Halloween crack.

"Obviously, we'll seek to get out of those whatever we can; we'll also be using satellite imagery over the winter as well. Then, next season we'll send a team in to re-open the station, verify the measurements from our instruments and take the situation from there," Stockings told BBC News.

"We've spent a long time finding the new site for Halley VI and of itself this site isn't directly at risk – it's just the unpredictability of the whole area."