For such simplistic looking and easily overlooked creatures, hydra sure have incredible powers – including the absurd ability to regrow their own heads if decapitated.

These invertebrate fresh water animals are also one of the closest examples we have of an immortal being. Unless thoroughly destroyed within a predator's digestive system or consumed by fire, hydra stem cells can replicate indefinitely.

Hydra can pretty much resurrect themselves after being torn apart – as long as at least five head-organizing cells remain intact they'll ooze their way to each other, combine and start organizing the rest of the remaining mess of cells back into a body. 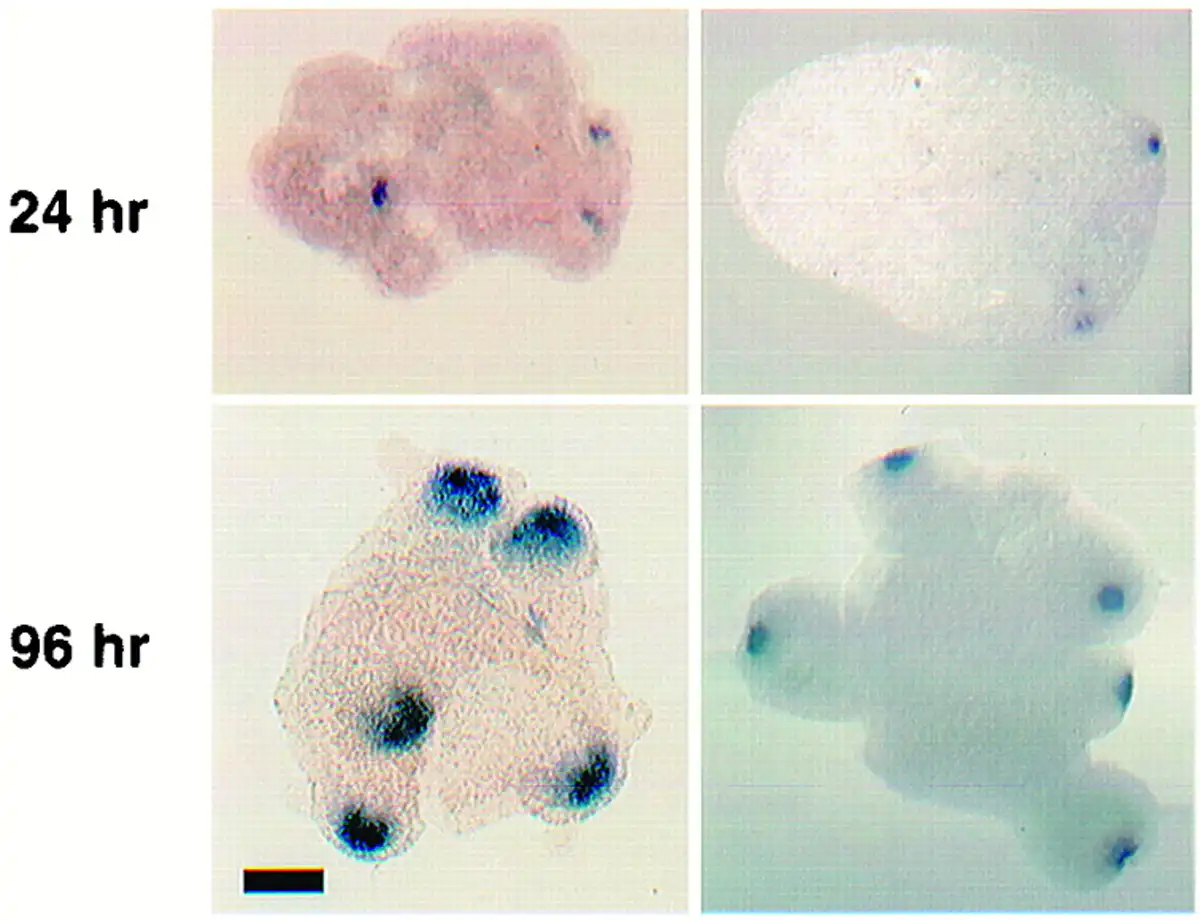 These incredible traits have long held scientists' attention, but there's still so much about how they work that remains mysterious.

Part of the cnidaria phylum of animals, which includes jellyfish, corals and sea anemones, the 10-20 mm hydra live in freshwater tropic and temperate environments.

Their tiny, gelatinous wormy bodies have stinging anemone-like tentacles at one end and a single stubby basal foot at the base that excretes sticky stuff for surface clinging. Like all cnidaria, their body plan is radially symmetrical, in contrast to our own bilateral symmetry.

At the hydra's head end, between its ring of tentacles is its dome-shaped hypostome – a structure that becomes their mouth when they rip themselves open to eat. The cells seal back together when not in use, and within this same structure is where those 50–300 head organizer cells usually reside.

These cells dictate that their neighbors should take the form of head cells – signaling which cell should form the hypostome and which should become part of the grabby tentacles.

If the hydra is chopped in two, anywhere along its top third, the remaining body bit will grow more organizer cells, which will then arrange a shiny new head for the animal.

These command cells also appear naturally along the hydra body when it is budding, reproducing asexually. 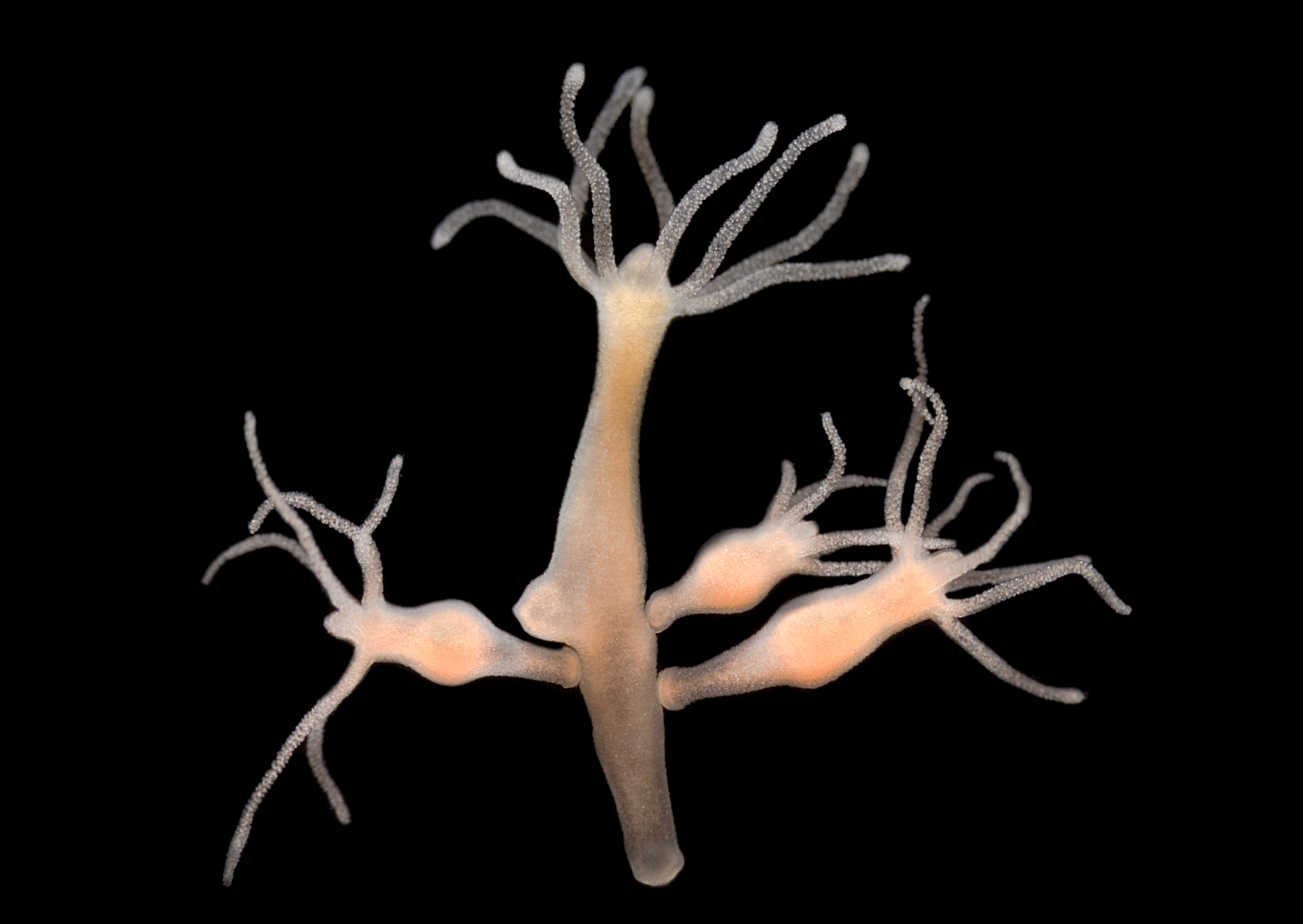 A hydra with three budding clones. (micro_photo/iStock/Getty Images Plus)

To understand these mythical hydra powers, University of California biologist Aide Macias-Muñoz and colleagues took a closer look at the hydra's genetics, comparing gene expression during head regeneration and budding. They mapped which areas of the genome were open for gene expression in the hypostome and budding tissues.

Previous research suggested the epigenetics of multiple developmental pathways are involved, referring to how genes in these pathways are regulated. Messing with some of the regulatory genes can produce some bizarre results, like multiple head organizers along the hydra's body.

"One exciting finding of this work is that the head regeneration and budding programs in Hydra are quite different," says Macias-Muñoz.

"Even though the result is the same (a hydra head), gene expression is much more variable during regeneration. Accompanying dynamic gene expression is dynamic chromatin remodeling at sites where developmental transcription factors bind."

In other words, the scaffolding that DNA coils around for structure – its chromatin – is opened up at these regions to allow the cells to make use of these developmental genes.

Many of these 2,870 regions of the genome – identified as being 'in use' within the organizer cells during head regeneration – include enhancer genes, whose products help drive other developmental processes.

These findings suggest these complex developmental enhancers were present before Cnidaria evolutionarily split from the group of animals that are bilaterally symmetrical (which includes us), 600 million years ago, explains Macias-Muñoz.

The team also found one family of genes involved in head regeneration called Fos, which is also seen in regeneration processes across other species, including fish, salamanders, and mice.

The genomes of cnidarians like hydra are surprisingly similar to ours, particularly in protein coding genes, meaning the clear differences in our morphology are likely due to how the genes are regulated, the researchers explain.

Regulatory enhancer genes have been shown to evolve more rapidly than other coding sequences in mammalian model animals, which may indicate an important mechanism that drives change and diversity over long evolutionary periods.

"Therefore, the study of cnidarians provides potential opportunities for elucidating key aspects of [animal] evolution such as the formation of [the] bilaterian body plan, and the nervous system," the team wrote in their paper.

The hydra's remarkable ability to regrow its own head is certainly a spectacular example of the power of epigenetics.

This research was published in Genome Biology and Evolution.