Laying on the muddy floor of the frigid inland Baltic Sea, scientists have found an almost perfectly preserved and intact shipwreck, undisturbed for hundreds of years.

Based on its incredible preservation, archaeologists have been able to date the ship back to the Renaissance. That's around the late 15th or early 16th century CE, the time of Christopher Columbus and Leonardo da Vinci.

The precise origin of the ship is unknown. It's from a time before naming ships was common; for now, it's been labelled Okänt Skepp - "Unknown Ship" in Swedish.

"Still on the main deck is an incredibly rare find - the tender boat, used to ferry crew to and from the ship, leaning against the main mast. It's a truly astonishing sight."

The first hints that there was something on the seabed 140 metres (460 feet) below the surface of those brackish waters came in 2009, when side-scan sonar wielded by the Swedish Maritime Administration revealed something out of the ordinary.

But it wasn't until a decade later - earlier this year - that the full significance of the wreck was actually revealed. And it was entirely by accident. MMT was employed to survey the seafloor ahead of laying a natural gas pipeline; and there, emerging from the gloom, was a tall ship.

"It's amazing," Pacheco-Ruiz told The New York Times. "We're still a little bit over the moon."

To study the ship in greater detail, scientists deployed remotely operated vehicles (ROVs) from the deck of the Stril Explorer. These were used to take a photogrammetric survey of the sunken vessel, providing detailed high-resolution 3D models the researchers could study in depth. 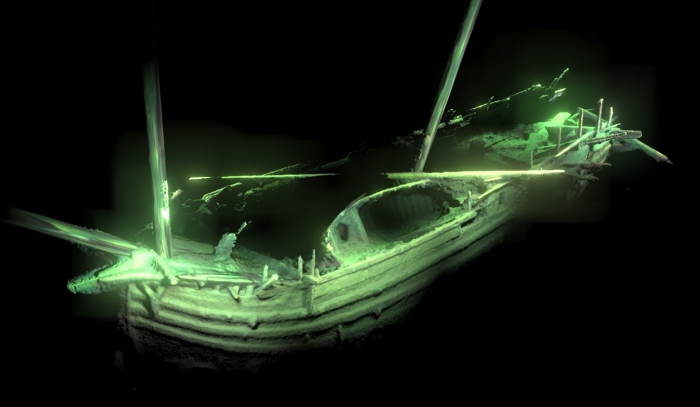 In addition to the unscathed tender boat, hull, and masts, some of the rigging also remains intact. So too does the bowsprit, and parts of the decorative transom. Even the capstan and bilge pump are partially preserved, and swivel guns can still be seen in place on the gun deck.

The team credits this level of preservation to the cold, slightly salty, hypoxic waters of the Baltic Sea's deeper waters; an environment less hospitable to the marine life that would usually ravage a wooden sunken ship.

The wrecked vessel is of great historical significance, the researchers said. Not only is it more intact than other sunken ships in the Baltic - such as the warship Mars, sunk in the First Battle of Öland in 1564, or the great warship Vasa, which sank on her maiden voyage in 1628 - it is also older.

"We know it's the oldest shipwreck in the Baltic. There's no other ship in the world of this period like this. We have older ships but they are only timbers or metal - we never have a ship like this with masts and anchors," Pacheco-Ruiz told The Daily Mail.

"It's game changing because of the period it pertains to. I think it's important to flesh out the collaboration between universities and the commercial sector - in the past it has always been done like treasure hunting crews or people who don't understand cultural heritage."

Of course, the story of Okänt Skepp isn't over yet. The biggest question to be answered is why she sank at all, since there's no damage that clearly indicates a cause.

For that, we'll need another expedition - one to carefully obtain samples from this mysterious wreck.