An aerial view shows a crater on a barley field near Ahlbach, Germany, on June 24. (Boris Roessler/DPA/AFP)

From the air, the massive crater resembles a pink virus floating against a pool of green.

But from the ground, the destruction is clear and devastating: A 33-foot (10 meter) wide, 13-foot (4 meter) gouge into the earth that began in the 1940s with an Allied sortie and ended Sunday morning in a massive blast in a barley field in central Germany.

No one was hurt in the blast, the German news site Hessenschau reported.

The explosion was thundering and unexpected, leading some residents in Ahlbach farmland to speculate it was an earthquake.

Explosive experts combed the crater, and no bomb elements were initially found, the nearby city of Limburg said in a statement, prompting the theory that it was the work of an asteroid.

However, a second look, with the help of drones, helped build evidence that has pointed to a likely culprit - a 550-pound (250 kilograms) dud of a bomb dropped decades ago that remained buried and untouched until its detonation mechanism eroded with time.

Between 1940 and 1945, Allied bombers dropped 2.7 million tons of bombs on Europe. About half of that ordnance fell on German targets, eradicating Nazi war infrastructure and killing more than 400,000 German civilians.

But about 10 percent of bombs dropped over Germany failed to explode, according to Smithsonian Magazine, leaving deadly artifacts in the ground to be found by firefighters, engineers and construction workers so often it has become routine.

The city of Limburg said the bomb probably had a chemical detonator that failed when the bomb was dropped.

Not all bombs explode on impact. Sometimes chemical components were used to delay explosions until a bomb could burrow into the ground to create a bigger crater and cause more damage.

With such bombs used in World War II, gravity helped. The components relied on a north-south orientation after a bomb fell as designed - with an air-powered fin that spun as the bomb descended. That fin drove a metal rod into a glass plate, releasing corrosive acetone that dissolves celluloid discs, according to Smithsonian Magazine.

Different thicknesses of discs were used - the thicker the disc, the longer the process took. The acetone eventually dissolved them, triggering a spring that would thrust a firing pin into a detonator.

But often bombs did not land correctly, coming to a rest either sideways or upside down. In those cases, the reaction stalls and the acetone falls away from the discs, delaying the explosion for years or decades as the components decay into dangerous instability. 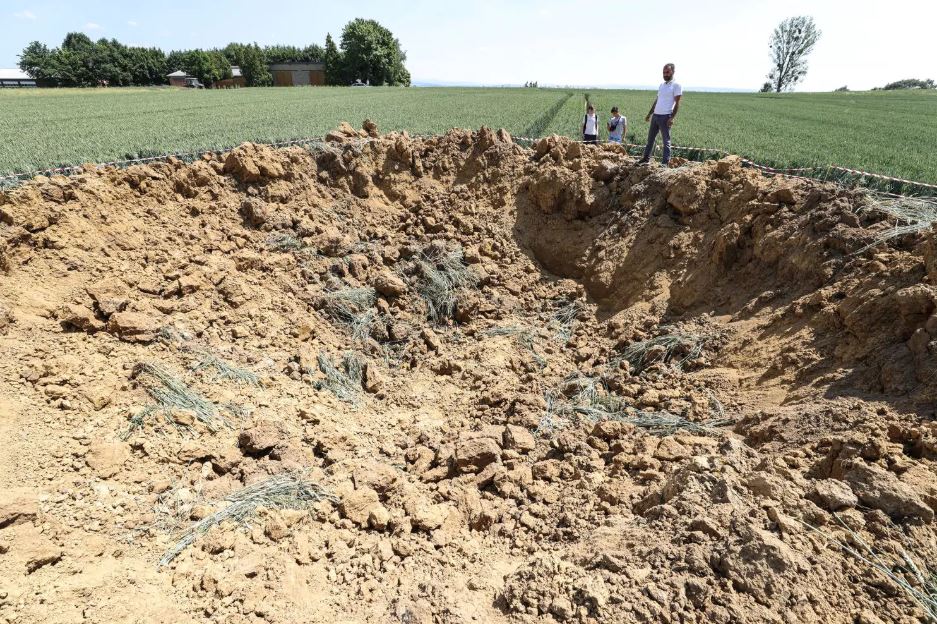 Limburg's railway depot and radio broadcast stations were a prime target for Allied bombers near the end of the war, the release said. Roads around Ahlbach were crucial avenues for German soldiers in retreat, Hessenschau reported.

Eleven technicians have been killed in the line of duty since 2000, Smithsonian Magazine reported. Three of those deaths came from a 2010 incident in which they dug out from a Göttingen market a 1,000-pound bomb with a delayed fuse.

A construction worker died in Euskirchen in 2012 after he dug into an unexploded bomb.

Germany isn't the only nation dealing with unexploded ordnance.

In Laos, the most heavily bombed country in history per capita, the United States dropped 2 million tons of ordnance over nine years ending in 1973 - equal to a full payload dropped every eight minutes for 24 hours a day, according to the advocacy group Legacies of War.

In Vietnam, a collection of global nonprofit organizations, the Vietnamese government and US groups have focused on removing cluster munition duds and other bombs that have killed 40,000 people.

One Vietnamese official said it would take 300 years to remove every bomb.

That means in Vietnam, and probably in Germany, the last deaths from those wars have not yet been recorded.