Scientists are at a loss to explain a strange seismic event that shook the planet on November 11 and was picked up by earthquake sensors stationed across the globe.

While the cause of this mysterious disturbance remains unknown, it's somehow linked to an ongoing seismic swarm that's been rumbling the archipelago of Mayotte in the Indian Ocean for several months – but just what these unusual tremors ultimately signify remains unclear.

"I don't think I've seen anything like it," seismologist Göran Ekström from Columbia University told National Geographic about the November 11 anomaly.

Almost exactly half a year before this strange signal turned up, seismologists were surprised by another kind of abnormal seismic activity in the same vicinity: a swarm of hundreds of small and frequent earthquakes originating about 50 kilometres (31 miles) off the east coast of Mayotte. 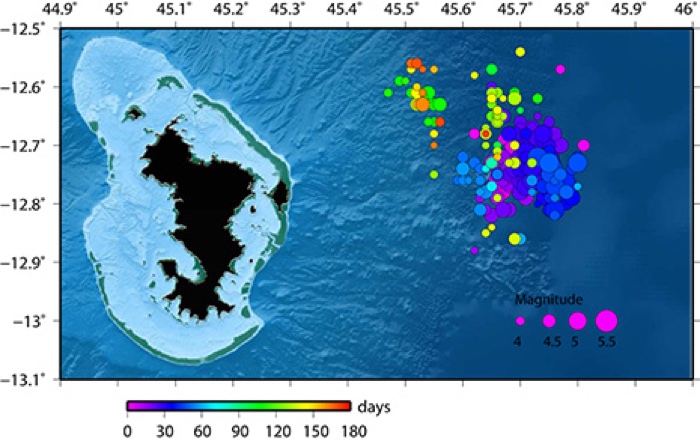 The network of islands and islets, located roughly halfway between Africa and Madagascar, is governed by France, but is also claimed by the island nation of Comoros.

On the morning of May 10, this region was rocked by a quake that turned up without warning, and which didn't come alone – being followed by a series of hundreds of tremors that have yet to disappear.

The most dramatic of these – a 5.8 magnitude event on May 15 – was the largest quake ever recorded in the Comoros basin, and while the swarm has generally lessened in intensity since, a 5.1 magnitude resurgence just this week served as a not-so-subtle reminder that this earthly turbulence isn't over.

While earthquake swarms sound alarming, they're not necessarily dangerous events.

In this case, a preliminary analysis of the seismic swarm by researchers at the École normale supérieure in Paris suggests the tremors can't be accounted for by tectonic movement alone, meaning volcanic activity in the region must also be involved.

Which brings us to November 11.

This is a most odd and unusual seismic signal.
Recorded at Kilima Mbogo, Kenya ...#earthquakehttps://t.co/GIHQWSXShd pic.twitter.com/FTSpNVTJ9B

Less than three weeks ago – during the swarm, but on a day when no swarm tremors were actually detected – scientists registered something else: a strange, long, and flat vibration that hummed consistently, without the spiky fluctuations that are a signature of usual quake activity.

Instead, this "atypical very low frequency signal" – to quote France's Bureau de Recherches Géologiques (BRGM) – repeated in a wave about every 17 seconds, lasting for about 20 minutes in total.

"It's something quite new in the signals on our stations."

Which isn't to say the team doesn't have a hypothesis. With what we already suspect about the seismic swarm, the researchers' best guess is the anomalous vibration was also linked to volcanic activity, perhaps due to a huge movement of magma under the Indian Ocean.

If so, this could also explain something else: Mayotte is not stationary.

According to one analysis, this movement could be due to the emptying of a magma reservoir nearby, although additional research would be needed to verify this.

If the hypothesis turns out to be correct, nobody can say for sure what might happen, but the modelling indicates Mayotte may keep moving as long as the swarm persists.

As for whether we'll encounter the mysterious signal again, nobody knows.

"These observations therefore back up the hypothesis of a combination of tectonic and volcanic effects accounting for a geological phenomenon involving a seismic sequence and a volcanic phenomenon," the BRGM explains.

"This hypothesis will need to be confirmed by future scientific studies."