Dark matter is thought to make up around 26 percent of the known Universe, but no one actually knows what it is, what it’s made of, or how to detect it.

Like the 'normal' matter that we see in stars, humans, slime, and everything else in the cosmos, dark matter appears to exert a gravitational force, but it doesn’t emit any form of light or radiation that scientists can detect. It’s as if the Universe is being haunted by the most pervasive ghost ever - we can feel its presence, but we don’t have the right gadgets to catch it in the act.

Now an astrophysicist at NASA says he might be able to explain why our current models of the Universe require something like dark matter to exist, but we can’t find it, no matter how hard we try: dark matter might consist of the massive black holes that appeared within a fraction of a second after the Universe first came to be.

The existence of these so-called primordial black holes could have distorted the distribution of mass in the early Universe, says Alexander Kashlinsky from NASA's Goddard Space Flight Centre, which is something we’ve been trying to explain through the existence of hypothetical high-mass particles such as Weakly Interacting Massive Particles (WIMPs) and axions for decades.

But every experiment so far, such as NASA's Alpha Magnetic Spectrometer and Fermi Gamma-ray Space Telescope missions, has failed to turn up evidence that these particles actually exist.

"These studies are providing increasingly sensitive results, slowly shrinking the box of parameters where dark matter particles can hide," says Kashlinsky. "The failure to find them has led to renewed interest in studying how well primordial black holes - black holes formed in the Universe's first fraction of a second - could work as dark matter."

Back in 2005, Kashlinsky and his team used NASA's Spitzer Space Telescope to take a snapshot of the background glow of infrared light in a certain region of space. This snapshot came to be known as the cosmic infrared background (CIB).

A distinctive patchiness appeared in this glow, and the astronomers said the most likely culprit was the aggregate light of the first sources that lit up the Universe more than 13 billion years ago. But what exactly were these first sources? Could they be the first ever black holes?

Fast-forward to 2013, and another study compared how the cosmic X-ray background (CXB) detected by NASA's Chandra X-ray Observatory compared to the CIB in the same region of space. 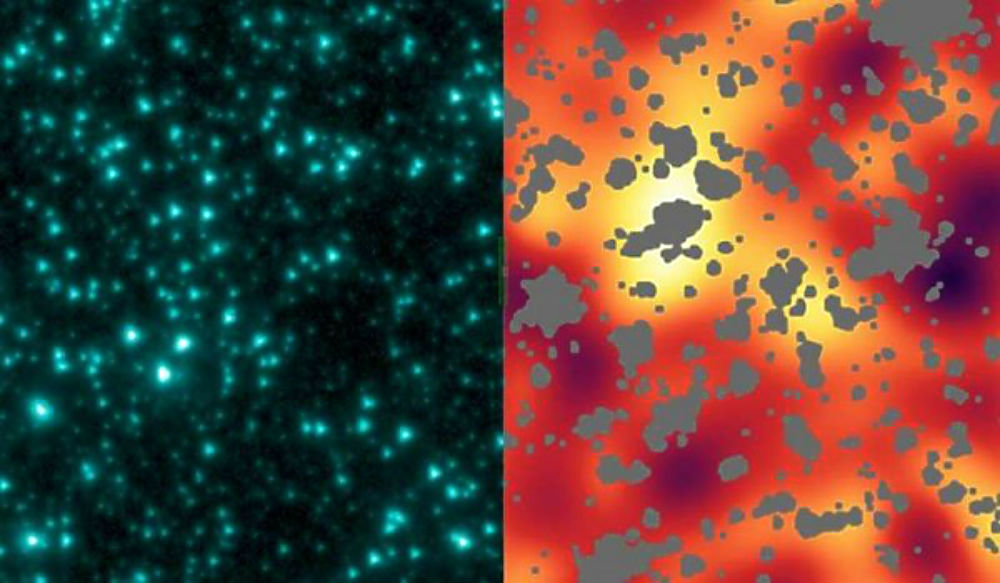 Due to the types of emissions they give off, the Universe’s first stars were discounted as candidates for the first sources of light, and that left only one explanation.

"[T]he irregular glow of low-energy X-rays in the CXB matched the patchiness of the CIB quite well. The only object we know of that can be sufficiently luminous across this wide an energy range is a black hole," says Kashlinsky.

That’s Exhibit A for black holes being the secret identity of dark matter. Exhibit B occurred on 14 September 2015, which went down in history as when scientists at the Laser Interferometer Gravitational-Wave Observatory (LIGO) detected the first direct evidence of gravitational waves. The significance of what the LIGO team found didn’t stop there, as Deborah Byrd explains for Earthsky.org:

"In addition to being the first-ever detection of gravitational waves, and assuming the LIGO event has been interpreted correctly, this event also marked the first direct detection of black holes. As such, it gave scientists information about the masses of the individual black holes, which were 29 and 36 times the Sun’s mass, plus or minus about four solar masses."

With this in mind, Kashlinsky’s paper analyses what could have happened in the early Universe if a population of primordial black holes similar to those detected by LIGO played the role of dark matter.

Kashlinsky explains that for the first 500 million years of the Universe’s lifespan, normal - or 'visible' - matter would have been far too hot to meld into the first stars. Dark matter doesn’t seem to react to extreme heat at all, which means it could have collapsed into clumps called minihaloes. The gravitational force of these minihaloes then enabled normal matter to accumulate.

"Hot gas collapsed toward the minihaloes, resulting in pockets of gas dense enough to further collapse on their own into the first stars," Francis Reddy explains for NASA. "Kashlinsky shows that if black holes play the part of dark matter, this process occurs more rapidly and easily produces the lumpiness of the CIB detected in Spitzer data even if only a small fraction of minihaloes manage to produce stars."

The consistency seen in the CIB and the CXB can be explained by the infrared light given off by the first stars created by this process, and X-rays from gas falling into the dark matter black holes.

"This study is an effort to bring together a broad set of ideas and observations to test how well they fit, and the fit is surprisingly good," says Kashlinsky. "If this is correct, then all galaxies, including our own, are embedded within a vast sphere of black holes each about 30 times the Sun's mass."

The hypothesis has been outlined in The Astrophysical Journal Letters.

Only more evidence from future LIGO experiments can strengthen or disprove it, but until then, it might be time to add primordial black holes to the list of dark matter candidates.