Illustration of Jezero Crater as it may have looked billions of years ago. (NASA/JPL-Caltech)
SPACE

A little over a decade from now, NASA plans to send astronauts to Mars for the first time. This mission will build on decades of robotic exploration, collect samples from the surface, and return them to Earth for analysis.

Given the immense distance involved, any operations on the Martian surface will need to be as self-sufficient as possible, which means sourcing whatever they can locally.

This includes using the local water to create oxygen gas, drinking water, and rocket fuel, which represents a challenge considering that any liquid water is likely to be briny.

Luckily, a team of researchers from the McKelvey School of Engineering at Washington University at St. Louis (WUSTL) has created a new type of electrolysis system that can convert briny water into usable products while also being compact and lightweight.

The team was led by Vijay Ramani, the Roma B. and Raymond H. Wittcoff Distinguished University Professor with WUSTL's Department of Energy, Environmental and Chemical Engineering (EECE). He was joined by Pralay Gayen and Shrihari Sankarasubramanian, two researchers with the Center for Solar Energy and Energy Storage (SEES) at WUSTL.

This new instrument is consistent with NASA's commitment to In-Situ Resource Utilization (ISRU) technologies, which will allow future missions to be less dependent on resupply missions.

It's also in keeping with NASA and other space agencies' commitment to reducing the costs of launching payloads into space since it's more efficient and compact than current electrolysis systems.

Traditional electrolyzers rely on electricity and fuel cells made of an electrolyte to break down chemical compounds and recombine them to create new ones.

The Perseverance rover (which will arrive on Mars by February 18th, 2021) is carrying an experiment known as Mars Oxygen ISRU Experiment (MOXIE), which will rely on a solid oxide electrolyzer cell (SOEC) to harvest oxygen gas from atmospheric carbon dioxide (CO2). The MOXIE instrument being inserted into the Perseverance rover. (NASA/JPL-Caltech)

Water electrolyzers use a similar process to chemically disassociate water and produce oxygen gas (O2) and hydrogen gas (H2), the latter of which can be used to create liquid hydrogen or hydrazine fuel (N2H4).

Unfortunately, these instruments cannot work with brines and are limited to purified, deionized water. The only other option is to remove the salt beforehand, which requires the addition of a desalinator.

By relying on a novel approach, the WUSTL team was able to create the first electrolyzer that can work with briny solutions, which are common on Mars. As Ramani said in an interview with the WUSTL publication, the Source:

"Our novel brine electrolyzer incorporates a lead ruthenate pyrochlore anode developed by our team in conjunction with a platinum on carbon cathode. These carefully designed components coupled with the optimal use of traditional electrochemical engineering principles has yielded this high performance."

Martian brines have been confirmed in recent years by missions like the Pheonix Mars Lander, which took samples of Martian soil in 2008 and identified high levels of salt after melting the ice it contained. 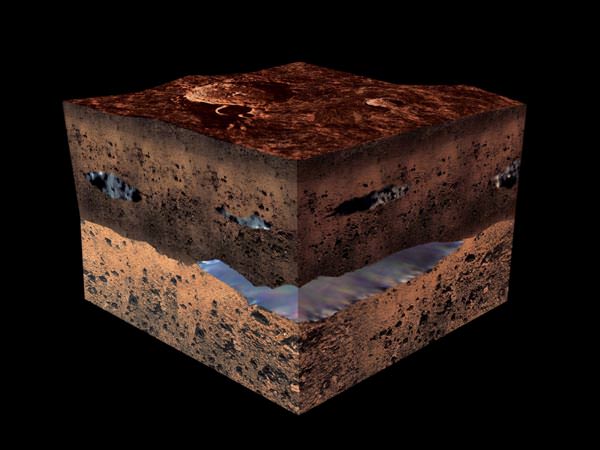 Artist's impression of water under the Martian surface. (ESA)

Similarly, the ESA's Mars Express probe discovered several underground sources of water that remain in a liquid state because of the presence of magnesium perchlorate.

For these reasons, a system that can work with salty water (while not relying on an additional desalination instrument) could significantly enhance ISRU operations on Mars and other destinations.

As Sankarasubramanian explained, their system is not only well-suited for dealing with Martian water, but it actually works better with it:

"Paradoxically, the dissolved perchlorate in the water, so-called impurities, actually help in an environment like that of Mars. They prevent the water from freezing, and also improve the performance of the electrolyzer system by lowering the electrical resistance."

Based on previous tests by technicians at the Massachusetts Institute of Technology (MIT), the MOXIE electrolyzer showed that it could produce up to 10 g/hour of oxygen gas (0.35 ounces) using 300 Watts of power.

By comparison, the instrument Ramani and his colleagues developed was able to produce up to 250 g/hour (8.8 ounces, or 1/2 a pound) of oxygen gas using the same amount of power (not to mention the hydrogen gas).

In addition, the system functioned under simulated Martian conditions – very low air pressure and temperatures as low as -36C (-33F) – as well as Earth-like conditions.

"Our Martian brine electrolyzer radically changes the logistical calculus of missions to Mars and beyond," added Ramani.

"This technology is equally useful on Earth where it opens up the oceans as a viable oxygen and fuel source."

"Having demonstrated these electrolyzers under demanding Martian conditions, we intend to also deploy them under much milder conditions on Earth to utilize brackish or salt water feeds to produce hydrogen and oxygen, for example, through seawater electrolysis."

On Earth, seawater electrolyzers could be used aboard submersible vehicles to allow for extended deep-sea missions.

It could also allow for significant expansion in the alternative fuels industry, where electrolyzers could create hydrogen fuel cells from seawater (which rely on hydrogen gas and oxygen gas to generate electricity).

The study that describes their findings (titled "Fuel and oxygen harvesting from Martian regolithic brine") recently appeared in the Proceedings of the National Academy of Sciences (PNAS).