A Previously Unseen Chemical Reaction Has Been Detected on Mars

The giant Martian sandstorm of 2018 wasn't just a wild ride - it also gave us a previously undetected gas in the planet's atmosphere. For the first time, the ExoMars orbiter sampled traces of hydrogen chloride, composed of a hydrogen and a chlorine atom.

This gas presents Mars scientists with a new mystery to solve: how it got there.

"We've discovered hydrogen chloride for the first time on Mars," said physicist Kevin Olsen of the University of Oxford in the UK.

"This is the first detection of a halogen gas in the atmosphere of Mars, and represents a new chemical cycle to understand."

Scientists have been keeping an eye out for gases that contain chlorine in the atmosphere of Mars, since they could confirm that the planet is volcanically active. However, if hydrogen chloride was produced by volcanic activity, it should only spike very regionally, and be accompanied by other volcanic gases.

The hydrogen chloride detected by ExoMars did not, and was not. It was sniffed out in both the northern and southern hemispheres of Mars during the dust storm, and the absence of other volcanic gases was glaring.

This suggests that the gas was being produced by some other process; luckily, we have similar processes here on Earth that can help us understand what it could be.

It's a several-step process that requires a few key ingredients. First, you need sodium chloride (that's regular salt), left over from evaporative processes. There's plenty of that on Mars, thought to be the remnants of ancient salt lakes. When a dust storm stirs up the surface, the sodium chloride gets kicked up into the atmosphere.

Then there's the Martian polar ice caps which, when warmed during the summer, sublimate. When the resulting water vapour mingles with the salt, the resulting reaction releases chlorine, which then reacts further to form hydrogen chloride. 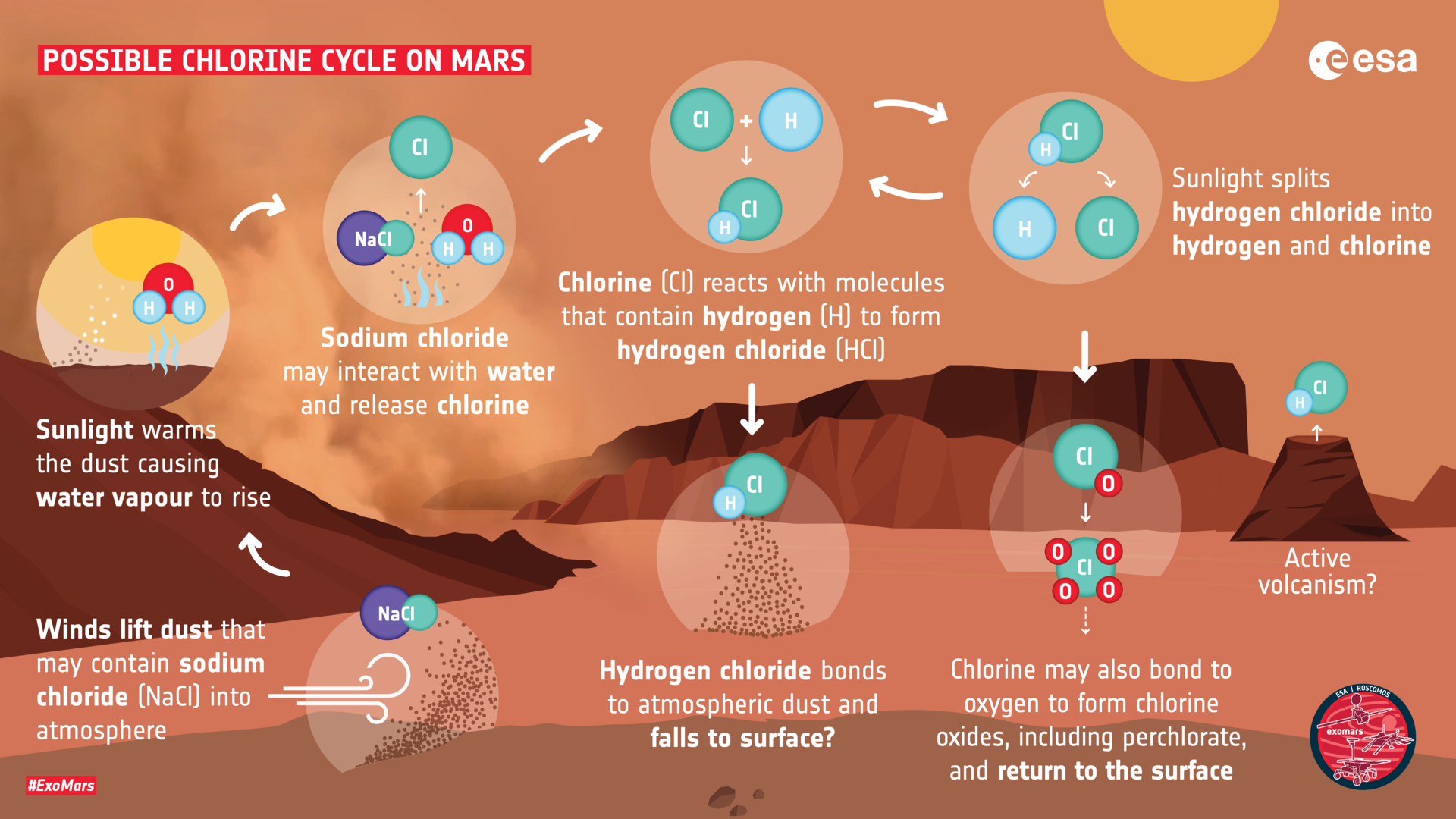 "You need water vapour to free chlorine and you need the by-products of water - hydrogen ­- to form hydrogen chloride. Water is critical in this chemistry," Olsen said.

"We also observe a correlation to dust: we see more hydrogen chloride when dust activity ramps up, a process linked to the seasonal heating of the southern hemisphere."

This model is supported by a detection of hydrogen chloride during the following 2019 dusty season, which the team is still analysing.

However, confirmation is still pending. Future and ongoing observations will help put together a more comprehensive picture of the process's cycles.

Meanwhile, laboratory experiments, modelling and simulations will help scientists rule out or confirm potential mechanisms behind the release of hydrogen chloride in the Martian atmosphere.