One of the most important archaeological sites for our understanding of Neanderthals is still disgorging its secrets. A new skeleton has been found in Shanidar Cave in Iraqi Kurdistan, and it's helping reveal how the Neanderthals dealt with their dead.

Shanidar Cave is famous for what is known as the Flower Burial. Among 10 fragmentary Neanderthal skeletons unearthed there in the 1950s and 1960s, one was found with clumps of pollen mixed in with the surrounding dirt.

This was interpreted as evidence that the bones - belonging to a man aged between 30 and 45 years - had been buried with flowers; a funerary rite. It contradicted our previous understanding of Neanderthals as animalistic, uncultured and unsophisticated.

But this interpretation was a controversial one, and others put forward alternative explanations, such as the deposit of the pollen by an animal.

More evidence has since emerged that Neanderthals were way smarter than we initially gave them credit for, but it's been a long time since they walked the Earth, and their remains have been pretty rare.

So the question remains: How did the Neanderthals deal with their dead? Now, archaeologists have found another partial skeleton in Shanidar Cave - not necessarily new remains, but possibly the rest of one of the initial 10, of which only small fragments were found originally.

It's the first articulated Neanderthal skeleton to be excavated in 20 years, and the first from the Shanidar Cave in over 50 years. And it seems to point to a deliberate burial.

The archaeologists have named the skeleton Shanidar Z.

"So much research on how Neanderthals treated their dead has to involve returning to finds from 60 or even 100 years ago, when archaeological techniques were more limited, and that only ever gets you so far," said archaeologist Emma Pomeroy of Cambridge University in the UK.

"To have primary evidence of such quality from this famous Neanderthal site will allow us to use modern technologies to explore everything from ancient DNA to long-held questions about Neanderthal ways of death, and whether they were similar to our own." Ribs and spine of the Neanderthal. (Graeme Barker)

The bones - as these things often are - were discovered by accident. The archaeologists were looking for the locations where the original 10 skeletons had been found. They were hoping to excavate some of the sediments so they could date them.

Work on the site started in 2014, but was delayed due to Daesh activity in the area. It wasn't until 2016 that the archaeologists found a rib bone at the bottom of their trench; it was 2018 when they finally found the skull, crushed flat.

The full extent of the skeleton was revealed and mostly excavated in 2019. 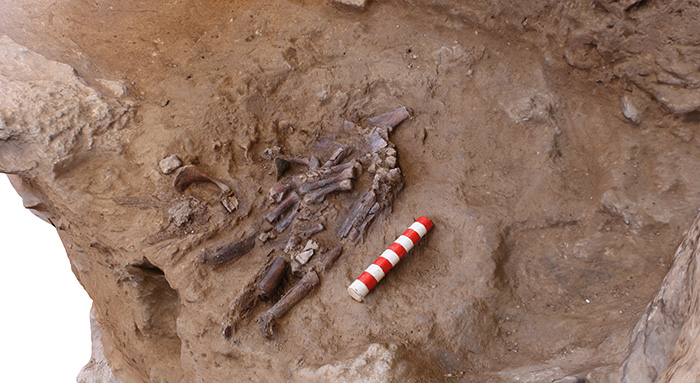 The bones of the Neanderthal's left arm and ribs in situ. (Graeme Barker)

Early dating suggests the bones are 70,000 years old, and the teeth suggest the person was in their middle years when they died.

In all, the skeleton consisted of most of the upper body to the waist. It was positioned laying on its back, with the left arm curled around, the hand resting under the head, as if the body was sleeping (shown in the illustration below).

A prominent stone near the head could, the researchers said, have been used as some sort of marker. The pose is quite different from the Flower Burial skeleton, which was arranged in the foetal position, right next to and possibly overlapping Shanidar Z.

Because of the skeletons' close proximity to each other, and because four of the skeletons - including this one, and the Flower Burial - seem to have been posed rather than laying in fallen positions, the archaeologists believe they were deliberately buried.

"The new excavation suggests that some of these bodies were laid in a channel in the cave floor created by water, which had then been intentionally dug to make it deeper," said archaeologist Graeme Barker of Cambridge University.

"There is strong early evidence that Shanidar Z was deliberately buried."

The bones are now at Cambridge University, on loan from the Kurdish Regional Government. They will be carefully conserved, and 3D-scanned for a more detailed analysis.

Initial scans have revealed that the petrous part of the temporal bone is still intact. This is the densest bone in the human body, and could retain DNA that can be extracted to learn more about the long-dead Neanderthal - such as what they looked like, and whether the people of the region had been interbreeding with other hominins.

And work at the site continues as well. The researchers are looking for signs of charcoal, indicative of cooking, and pollen that could help shed more light on the mysterious Flower Burial.

"In recent years we have seen increasing evidence that Neanderthals were more sophisticated than previously thought, from cave markings to use of decorative shells and raptor talons," Pomeroy said.

"If Neanderthals were using Shanidar cave as a site of memory for the repeated ritual interment of their dead, it would suggest cultural complexity of a high order."