It has only just opened its eyes, but already a new X-ray observatory is revealing incredible details about the Universe. The 'first light' images from the eROSITA X-ray telescope have revealed hidden stars in the Milky Way, and changes in a supernova that we saw explode over 30 years ago.

That supernova, SN 1987A, took place 168,000 light-years away in the Large Magellanic Cloud. It was the closest supernova to us since 1604 CE, and greatly informed our understanding of how some of these massive events occur.

eROSITA's observations are showing we can still learn a lot from this explosion from years past; the initial findings also hint at the incredible potential of this new-generation instrument.

The telescope launched on July 13 as part of the new German-Russian Spektr-RG high-energy astrophysics space observatory. It consists of seven Wolter mirror modules, each of which are fitted with 54 gold-coated mirrors for detecting the highest-energy X-rays with high sensitivity. Each module is also fitted with a CCD camera sensor, for exceptional resolution.

After being parked in the L2 Earth-Sun Lagrange point - a region of space in relation to two orbiting bodies where a smaller object can maintain a stable orbit - eROSITA started taking its first observations on October 13.

"These first images from our telescope show the true beauty of the hidden Universe," said astrophysicist Peter Predehl of the Max Planck Institute for Extraterrestrial Physics (MPE) in Germany; he is the Principal Investigator of eROSITA.

"To meet our science goals we needed enough sensitivity to detect the most distant clusters of galaxies in the Universe over the whole sky, and resolve them spatially. These first light images show that we can do exactly that, but we can go a lot further."

All seven telescope modules were operating to take images of the Large Magellanic Cloud, and a pair of interacting galaxy clusters 800 million light-years away called Abell 3391 and Abell 3395.

In the image of the Large Magellanic Cloud, a few things stand out. There's a bubble-shaped object just off-centre; that's the superbubble 30 Doradus C, an X-ray cavity about 300 light-years across.

On the bottom left, a feature resembling a bird with outstretched wings is a binary called LMC X-1. It consists of a black hole 10 times the Sun's mass and a blue supergiant star 32 times the Sun's mass, on a tight orbital period of 3.9 days. The black hole is stripping material from the star, producing a flare of X-ray radiation.

Just above the bird-shaped binary, at about 9 o'clock, is an active galactic nucleus, a supermassive black hole actively accreting matter, far behind the Large Magellanic Cloud.

And in the middle, that very brightly shining star is SN 1987A. Yet, as bright as it is, the new eROSITA data shows that it is actually growing dimmer over time as the supernova's shockwave expands through the galaxy.

"X-rays give us a unique view of the Universe, hidden in visible light," said MPE astrophysicist Kirpal Nandra.

"Where we see clusters of galaxies with optical telescopes, X-rays reveal the huge reservoirs of gas filling the space between them and tracing out the dark matter structure of the Universe. With its performance demonstrated, we now know that eROSITA will lead to a breakthrough in our understanding of the evolution of the energetic Universe." 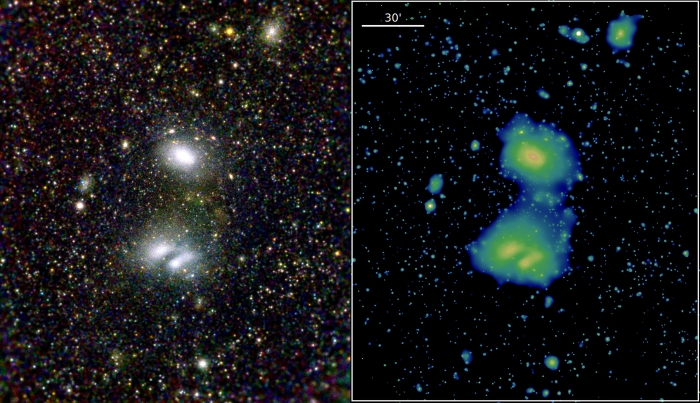 Meanwhile, the images of the galaxy clusters Abell 3391 and Abell 3395 (above) show each cluster - tens of millions of light-years across, and containing thousands of galaxies - as a bright node in space. Between them, we see the hot X-ray emitting gas that connects them.

Observing such clusters is part of the observatory's objective, and it's expected that eROSITA will find many more new ones.

"This is a dream come true. We now know that eROSITA can deliver on its promise and create a map of the whole X-ray sky with unprecedented depth and detail," said MPE astrophysicist Andrea Merloni.

"The legacy value will be enormous. Beside the beautiful images like the ones we're showing today, catalogues of millions of exotic celestial objects such as black holes, galaxy clusters, neutron stars, supernovae and active stars will be used by astronomers for years to come."