A new type of archaeological site has been discovered in the desert lava fields of western Saudi Arabia. Nearly 400 structures dating back thousands of years have been found, with many clustered in Harrat Khaybar.

And it's partially thanks to the introduction and growing accessibility of aerial mapping technologies, which allow researchers to view areas they can't easily reach by land, or don't know are significant.

The monuments have been called "gates", and are described in an upcoming paper by David Kennedy of the University of Western Australia, who in 1978 founded the Aerial Photographic Archive for Archaeology in the Middle East.

They're not gates at all - they are so named because they look a bit like old-fashioned field gates from the air - two upright posts, with bars between them, as seen in the image below. 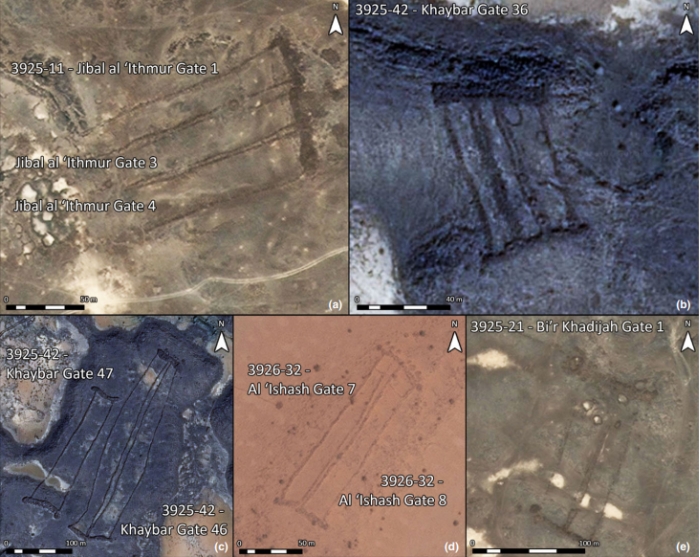 They were initially discovered by citizen science.

"This novel site type was first brought to a wider audience by a group of Saudi nationals - all non-archaeologists - who have been engaged in exploring the cultural heritage of their country," Kennedy wrote in his paper.

"In particular, Dr Al-Sa'eed, a medical doctor who, together with other members of what they have called the Desert Team, used Google Earth to examine parts of the landscape, visit some of the sites, and illustrate them on a website."

What they are and why they were built is yet unknown, but their presence suggests that the lava fields used to be much more habitable.

"The lava fields are often rich in archaeological remains, implying a moister past and more abundant vegetation, and recent fieldwork identifying larger settlement sites supports this notion," Kennedy wrote in the paper.

"As in the much better explored lava field of Jordan there are many thousands of stone-built structures which are collectively known to Bedouin as the 'works of the old men'."

The gates aren't the only structures at the sites. Interspersed with and sometimes even overlapping the gates are what researchers estimate to be tens of thousands of stone cairns, sometimes ringed with a small stone wall so that they resemble a bullseye from the air. There are also structures known as "kites," seen in the image above intersecting with a gate, common across the desert fields of the Middle East, the function of which is unknown but which are thought to have perhaps been used to trap game.

Cairns are often burial monuments, but it's unlikely that these would be built intersecting with another structure, the paper notes. Fieldwork would be required to determine if there are human remains within these cairns - and that, in turn, might yield clues as to the purpose of the gates.

A field team may also use optically stimulated luminescence to examine the monuments. This technique can determine the last time quartz crystal was exposed to light, thus providing an accurate construction date.

Kennedy has another paper currently in press on a few other little-known or unknown site types in Saudi Arabia, found using aerial mapping and photography. Drones are also proving to be a powerful archaeology tool - in 2016, archaeologists found a massive monument in Petra using a drone to fly where they couldn't reach.

"The availability of high-resolution satellite imagery of Saudi Arabia on publicly available platforms such as Google Earth and Bing Maps has been transformational for archaeology," Kennedy wrote in the paper.

"Within just a few years tens of thousands of sites previously unrecorded and scarcely known to the academic world have been mapped."

The paper has been accepted for publication in the journal Arabian Archaeology and Epigraphy.