A New Type of Li-Fi Has Reportedly Cracked 40 Gbps, 100 Times Faster Than The Best Wi-Fi

If you're frustrated with slow wi-fi, you might be one of the many people eagerly awaiting the commercialisation of li-fi (or light-based wi-fi), which promises to be up to 100 times faster than the connections we use today.

Most li-fi systems rely on transmitting data via LED bulbs, which means there are some limitations to how easily the technology could be applied to systems outside the lab. But researchers have come up with a new type of li-fi that uses infrared light instead, and it's reportedly already cracked 40 gigabits per second (gbps) in early testing.

For those who missed the li-fi hype, the communications system was first invented in 2011, based on the idea of transmitting data via the imperceptible flickering of LED light - think morse code happening so fast, it's invisible to the human eye.

Lab-based tests have shown that this type of li-fi can achieve speeds of 224 gbps. In real-world testing back in 2015, that speed was slowed down to a still-impressive 1 gbps, getting people excited about the possibility of li-fi in their homes and offices - all you need is an LED bulb.

But there are some challenges with LED-based li-fi. Obviously, the fact that it requires a light to be turned on in order to work means you can forget lying in bed in the dark and scrolling through Facebook at breakneck download speeds).

And just like regular wi-fi, existing LED li-fi systems use one bulb to beam data to all connected devices, so it slows down the more devices that are connected to it.

To fix these issues, PhD student Joanne Oh from Eindhoven University of Technology in the Netherlands has taken the li-fi concept and run with it, creating a new type of system based on harmless infrared light, rather than LED.

Infrared li-fi isn't a new idea, but most other experimental systems use energy-intensive movable mirrors to beam infrared light, so haven't been very promising for commercialisation.

Instead, Oh's system uses passive antennae to send out the data, with no moving parts.

According to an announcement made by Eindhoven University this week, early tests have already achieved a download speed of 42.8 gbps over a distance of 2.5 metres (8.2 feet) using the system.

To put that into perspective, the average connection speed for most people in the Netherlands is around 17.6 mbps (2,000 times slower), and the best wi-fi systems available max out at around 300 mbps (around 100 times slower).

The team is currently waiting for that 42.8 gbps speed to be published in a peer-reviewed journal, so we have to remain skeptical for now, but you can see earlier publications on the li-fi system here and here.

What we know right now is that the system works by beaming wireless data through a few central 'light antennae' that are mounted on the ceiling.

These antennae direct rays of infrared light supplied by an optical fibre using gratings that radiate rays light rays in different directions depending on their wavelengths and angles, which means they don't require power or maintenance. 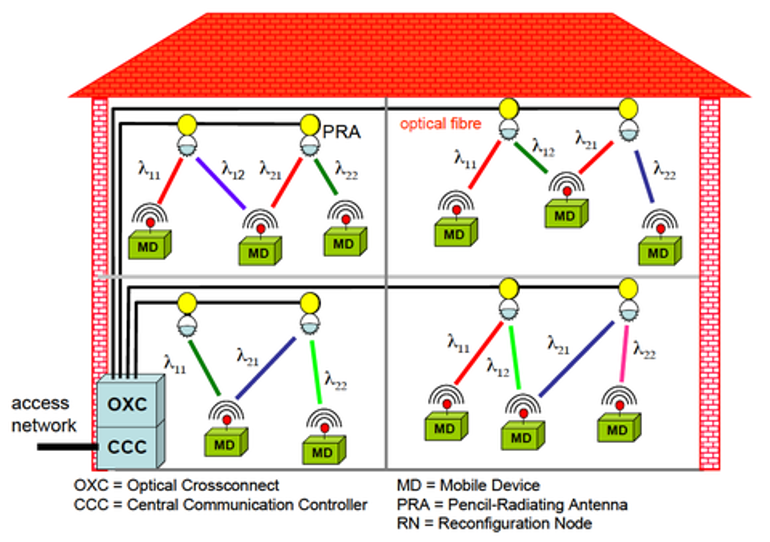 Each device get its own ray of light at a slightly different wavelength, so the connection shouldn't slow down, no matter how many smartphones and computers are using it at once.

The infrared light used by the systems is greater than 1,500 nanometres, which puts it in a frequency range of around 200 terahertz.

For comparison, wi-fi uses radio waves with a frequency of either 2.5 or 5 gigahertz, which have a lot more interference. And because the wavelengths of infrared light being used to transmit data can't be detected by the cells in our retina, they're invisible to our eyes.

The infrared li-fi hasn't been tested for its upload speeds as yet - for now the system will use radio waves for uploads.

Oh's project was part of a larger group working on the system at the uni - other projects are now investigating how these antennae can track online devices as they move around a space, so that the connection doesn't get disrupted when people travel between rooms.

Head of the group, Ton Koonen, said in a press release that it'll still be at least five years before the new technology could be commercialised, with the "first devices to be connected to this new kind of wireless network will be high data consumers like video monitors, laptops or tablets".

That means it's unlikely to be rolled out by your internet service provider any time soon.

And there are still some hurdles to overcome, regardless which type of li-fi you're looking into.

Even though infrared light can pass through more materials than visible light, both types of li-fi won't be able to transmit through walls - which is great if you want to keep your connection super secure, but probably not that user-friendly.

There's also the question of whether our devices are advanced enough to make use of such super-fast connections - data still has to be slowed down to be sent around our electricity-based devices.

But while researchers figure that out, it's nice to know that there are now two promising li-fi systems being tested and improved all the time.

In science, competition is an awesome driver of innovation, and we're looking forward to seeing which type of li-fi system hits the market first.

You can read more about Oh's li-fi system in the Journal of Lightwave Technology and IEEE Explore.