Just west of the Nile, in one of the most important ancient sites in Egypt, archaeologists have uncovered a royal boat tomb, suspected to belong to Pharaoh Senwosret III - one of the most powerful rulers of Egypt's Middle Kingdom.

The 3,800-year-old royal chamber features a fleet of 120 ancient boats etched into the interior walls, and contains the remains of a wooden boat - evidence that the ancient practice of burying boats near royalty was still in play in 1840 BC.

"We were quite mystified," lead archaeologist Josef Wegner from the University of Pennsylvania told National Geographic. "We were expecting it to be a tomb."

The grand, subterranean hall, which would have once stretched 21 metres (70 feet) long and 4 metres (13 feet) wide, was first noticed beneath the ancient city of Abydos back in 1901, when archaeologists noticed the barrel-vaulted roof peaking out from the sand.

But when the roof collapsed during excavation, the project was abandoned - until now.

Wegner and his team have spent the past two years salvaging the ruins, along with a cache of more than 100 pottery vessels just outside.

"The vessels are necked liquid storage jars, usually termed 'beer jars' although probably used for storage and transport of a variety of liquids," the researchers report.

Of particular interest are those boat etchings on the wall - 120 have survived almost four millennia underground, while many have since been worn away. Depictions of cattle, gazelles, and ﬂoral designs are occasionally interspersed among the boats.

With some of the boats extending nearly 1.5 metres (5 feet) high on the finely plastered walls, you can clearly make out the masts, sails, rigging, deckhouses/cabins, rudders, oars, and in some cases, rowers.

It's not clear if the boats depicted are meant to represent the pharaoh's own fleet, or perhaps just Egyptian boats in general, and at this stage, there's no way of knowing who was responsible for actually carving them, but it exemplifies a long tradition of burying boats in near royal funerary complexes.

"While numerous questions remain regarding the purpose of these images, what is unique is the astounding quantity of so many boats depicted together in one location," say the researchers.

Here are the pots outside:

And here's the inside chamber: 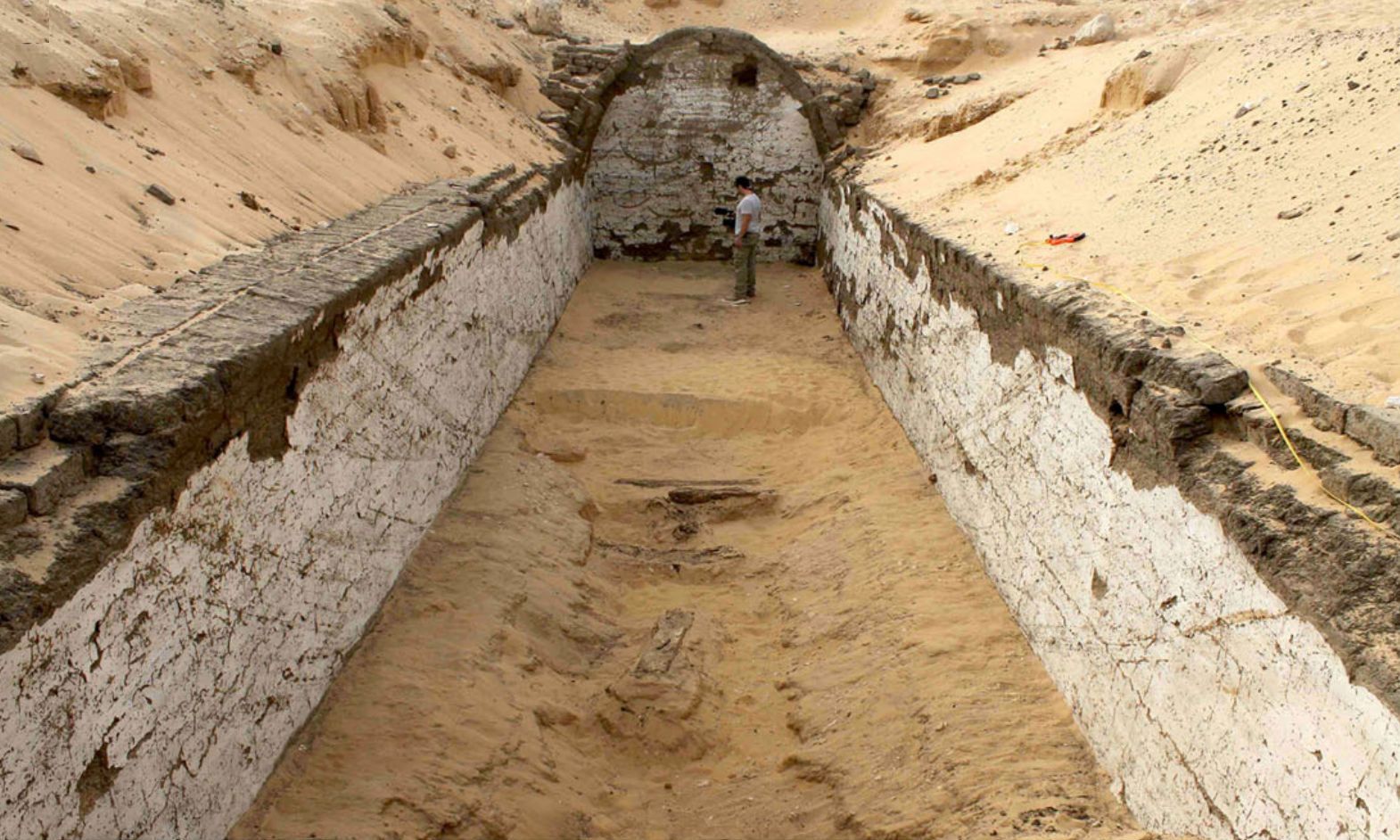 Here are the boat etchings in detail:

So who was this Pharaoh Senwosret III, you might ask?

Considered to be the most powerful ruler of the 12th Dynasty of ancient Egypt, Senwosret III ruled from 1878 BC to 1839 BC, during which time the nation enjoyed great prosperity and power, and a resurgence of craft and urban development.

During this rule, Senwosret III completely reshaped Egypt's government, and extended his dominion in Nubia to the south, and took to hidden, underground royal tombs rather than the showy pyramids of pharaohs before him.

While the kings of the past were intent on making visages of themselves look far more grand than the reality, Senwosret III seemed cool with being depicted as mature and ageing - perhaps to signify his kingly burden.

As The Met describes the artefact below:

"The face of Senwosret III is one of the most individual and recognisable in all of Egyptian art. The deep-set, heavy-lidded eyes, the thin lips, and the series of diagonal furrows marking the rather hollow cheeks give representations of this king a brooding expression not usually found on the faces of Egyptian kings, who are generally portrayed with a more youthful countenance.

This image is one of the few instances in Egyptian art in which the ruler seems consciously to have chosen to represent his humanity rather than an idealised image of eternal kingship." Senwosret III has been linked to the boat tomb because his own tomb has been found nearby, and dated to around the same time.

The researchers report that the boat tomb is about 65 metres east of the entrance of Senwosret III's own funerary complex, and features bricks "identical in size and composition to those used in the enclosure walls and other features of the Senwosret III tomb enclosure".

While the expensive lumber that once made up his buried ship has long since been stolen or rotted away - except for a couple of planks that the archaeologists have managed to salvage - the fact that Senwosret III liked to keep his treasures for the afterlife underground means we still get to look at those boat etchings, 3,800 years later.

We can't wait to see what else Wegner and his team turn up.

The research has been published in the International Journal of Nautical Archaeology.