A Physicist Has Calculated How Much Yoda Weighs

In news you probably didn't realise you needed to know until now, Rhett Allain, a physicist and science writer for Wired, has calculated the weight of Yoda, everyone's favourite little green guru. And in the process, he may have revealed a Star Wars plot secret about that famous training scene on the swamp planet Dagobah.

Yes, we know what you're thinking: why does anyone need to know what a fictional Jedi master weighs, even if he is hands-down the wisest person in the entire Star Wars franchise? But you're missing the point, because it's not the why but the how that's important, and Allain has used some truly beautiful physics to come to his end result.

To work out Yoda's weight, Allain has based his calculations on one key scene - namely, the part in Star Wars Episode V: The Empire Strikes Back where Yoda is teaching Luke how to use 'The Force' by balancing on one of Luke's feet while he does a single-handed handstand.

You can see that in action at the 0:58 mark in the video below, where someone has kindly set the training montage to the Rocky theme song (thank you, Internet gods).

Why that specific scene? From a physics point of view, that one-handed handstand provides the most clues as to Yoda's mass, as Allain explains over at Wired: "This will be all about the centre of mass. If the Luke-Yoda system is in equilibrium, then the centre of mass for the entire system must be directly above Luke's one hand on the ground."

Allain stipulates that his calculations are based on the following assumptions:

So how exactly do you calculate the mass distribution of a human? Allain references this handy study, which shows that humans have five points of mass: our torso and our four limbs. He then proceeds to use those values to calculate the horizontal centre of mass in the Luke-Yoda handstand set-up.

We'll let you head over to Wired for those calcuations, because Allain has created some really beautiful scientific diagrams, and has also lain out the formulae he's used for those playing along at home.

But his end result is what's really interesting. Because it turns out that for Luke to be able to hold a single-handed handstand with his limbs as they are and with Yoda balanced on one foot, Yoda would have to weigh -43.7 kg. 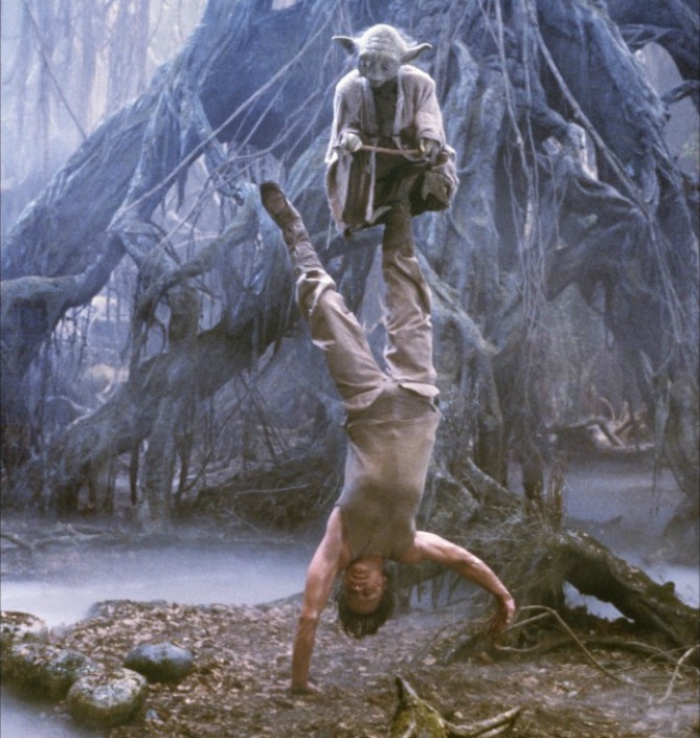 Yep, that's right, he'd have to have a negative mass. Which means that (spoiler alert!) Yoda must have been using The Force to hold Luke up in that position, Allain concludes.

"In fact, even if Luke was doing a handstand without Yoda pulling up, his centre of mass would be 12 cm to the right of his hand. He would tip over. Why is it that Yoda using The Force and not Luke? Luke doesn't know what he is doing. He couldn't even lift the X-wing (which happens right after this). He's just a student."

So why is Yoda, who's supposed to be strengthening Luke's skills, using his own powers to help him out? Well, Allain has a pretty good idea about that too. "Yoda was just helping Luke because he wanted him to feel a small sense of accomplishment after his failure in the cave," he explains over at Wired.

We can't help but think that this trickery may have been what given Luke the confidence to harness his own powers and go on to defeat his father and save the galaxy in Chapter VI. Because what can't you achieve if you've managed the single-handed handstand with a friend balancing on your foot? Oh Yoda, your wisdom never ceases to impress.

And in case you're left feeling dissatisfied that we're never going to know the real, non-Force-affected weight of Yoda, don't worry. Allain has also used physics to work out the weight of Darth Vader, and that's even more fun. Head over to Wired to see the full calculations.