Earth's glaciers are shrinking, and in the past 20 years, the rate of shrinkage has steadily sped up, according to a new study of nearly every glacier on the planet.

Glaciers mostly lose mass through ice melt, but they also shrink due to other processes, such as sublimation, where water evaporates directly from the ice, and calving, where large chunks of ice break off the edge of a glacier, according to the National Oceanic and Atmospheric Administration (NOAA).

By tracking how quickly glaciers are shrinking, scientists can better predict how quickly sea levels may rise, particularly as climate change drives up average global temperatures.

But estimating the rate of glacier shrinkage can be notoriously difficult; past estimates relied on field studies of only a few hundred glaciers out of the more than 200,000 on Earth, as well as sparse satellite data with limited resolution, the authors noted in their new study, published Wednesday (April 28) in the journal Nature.

Some of this satellite data captured changes in surface elevation, but only sampled a few places and at sparse time points.

Other satellites detected slight shifts in the Earth's gravitational field, but could not disentangle how much glacier shrinkage contributed to these shifts, as opposed to mass changes in ice sheets or solid earth, for instance.

To zero in on a more precise estimate, the team used myriad satellite and aerial images to survey 217,175 glaciers, accounting for nearly all of Earth's glaciers.

In particular, a 20-year archive of images from NASA's Advanced Spaceborne Thermal Emission and Reflection Radiometer (ASTER), a high-resolution sensor aboard the Terra satellite, supplied the team with a wealth of data and allowed them to make more certain estimates of glacier mass loss through time.

"We not only have the complete spatial coverage of all glaciers, but also repeat temporal sampling," meaning measurements taken from many points in time, said first author Romain Hugonnet, a doctoral student at the University of Toulouse in France and the Laboratory of Hydraulics, Hydrology and Glaciology (VAW) at ETH Zürich in Switzerland. 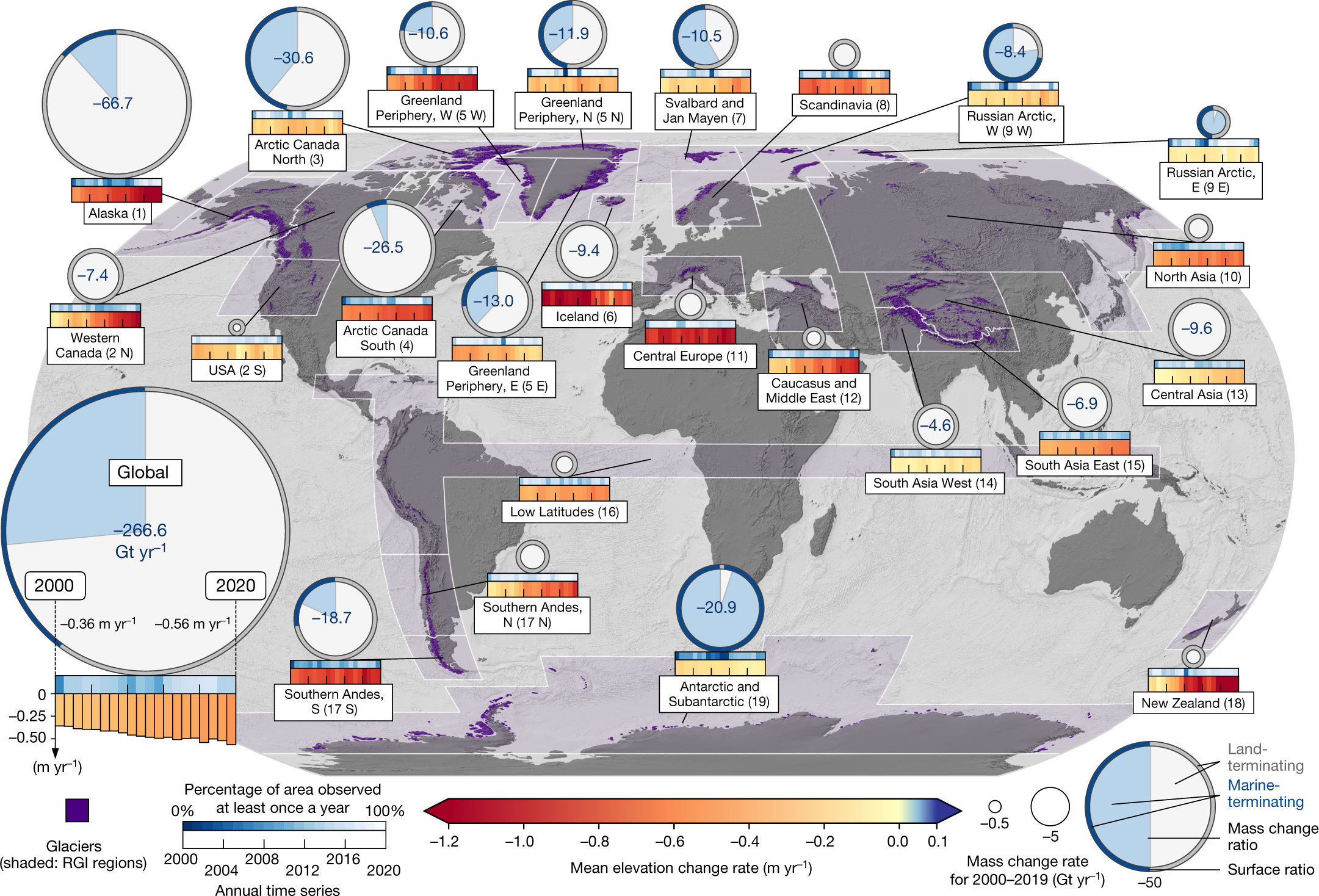 And for each decade since 2000, the overall rate of glacier mass loss has been accelerating, increasing by about 52.8 billion tons (48 billion metric tonnes) per year, which may account for an observed acceleration in sea-level rise.

These estimates significantly narrow the uncertainty around how much mass glaciers lost in recent decades, Hugonnet said.

For instance, the latest report from the Intergovernmental Panel on Climate Change (IPCC) and a recent global study, published in 2019 in the journal Nature, both calculated mass loss estimates in the same ballpark as the new study; but their margins of error spanned several hundred gigatonnes on either side.

Hugonnet and his team were able to greatly reduce this uncertainty by using the ASTER data.

ASTER captures images on the visible and near-infrared spectrum, "so almost what we see with our own eyes," Hugonnet said.

Because the sensor orbits Earth about 438 miles (750 kilometers) above the planet's surface, it can snap images of the same locations from multiple angles: once as it passes directly over a spot and once as if it's "looking back" from where it came.

The two snapshots can then be used to reconstruct the 3D topography of Earth's surface, and in this case, the 3D structure of glaciers across the planet. Hugonnet and his team quantified these changes in volume and then multiplied that by the density of glacier ice, to determine how much mass the glaciers had lost.

The group also double-checked their work against data from NASA's Ice, Cloud, and land Elevation Satellite (ICESat) and Operation IceBridge campaigns, a NASA project in which a fleet of research aircraft surveys Earth's polar ice.

This additional data confirmed that the ASTER images generally matched up with other available data front the same time period, and it also helped the team correct for statistical "noise" in the ASTER data.

"The problem with glaciers is that we're not only losing ice, we're also losing firn," a kind of partially compacted snow usually found on top of glaciers, he said. The current study didn't differentiate firn from ice when estimating mass loss, "so it's, right now, our largest source of uncertainty," in terms of nailing down a precise rate, Hugonnet said.

In addition, the team noted that not all Earth's glaciers lost mass at the same rates. "What was even more interesting, and a bit surprising, was to see that some regions decelerated and others accelerated," Hugonnet said.

For instance, mass loss from glaciers in Alaska and western Canada ramped up significantly in the study time frame, while loss from Icelandic, Scandinavian and southeast Greenland glaciers slowed between the early 2000s and late 2010s.

Zooming in on these regions, the authors found that regional climate conditions, specifically long-term fluctuations in precipitation and temperature, helped explain these stark differences.

So while Iceland, Scandinavia and Greenland entered a decade of relatively cool, wet conditions in the second decade of the 21st century, northwestern North America entered a relatively dry period, meaning glaciers ultimately lost more ice than they gained snow.

"We have those fluctuations that exist in some regions and can last for about a decade, sometimes," Hugonnet said.

"This is also why we need such globally complete sets of observations, such as the one we provided," he noted.

Tracking average glacier mass loss, on a global scale, can help scientists predict global sea-level rise; but on a local scale, glacier mass loss can drastically alter nearby bodies of water and the availability of water resources, as well as threaten to trigger disasters, such as avalanches and devastating spring floods, Hugonnet said.

So it's important to capture both the big picture and fine details.