A Vast Global Ocean Lies Under The Surface of Saturn's Moon, Enceladus

A huge global ocean is hidden underneath the surface of Saturn's sixth largest moon, Enceladus, according to new research just announced by NASA.

NASA scientists made the discovery after noticing that the magnitude of Enceladus's slight wobble as it orbits Saturn is too great to be accounted for if the moon's outer ice shell were solidly connected to its rocky inner core, as was previously thought to be the case. The only explanation, says NASA, is that an uninterrupted body of water lies in between the ice crust and the moon's inner core.

"If the surface and core were rigidly connected, the core would provide so much dead weight the wobble would be far smaller than we observe it to be," said study co-author Matthew Tiscareno from the SETI Institute in the US in a statement. "This proves that there must be a global layer of liquid separating the surface from the core."

The team studied more than seven years' worth of images of Enceladus taken by the Cassini probe, which has orbited Saturn since 2004. They were able to detect the moon's wobble by mapping features such as craters on Enceladus's external surface and tracking how their positions moved as the moon orbited Saturn. 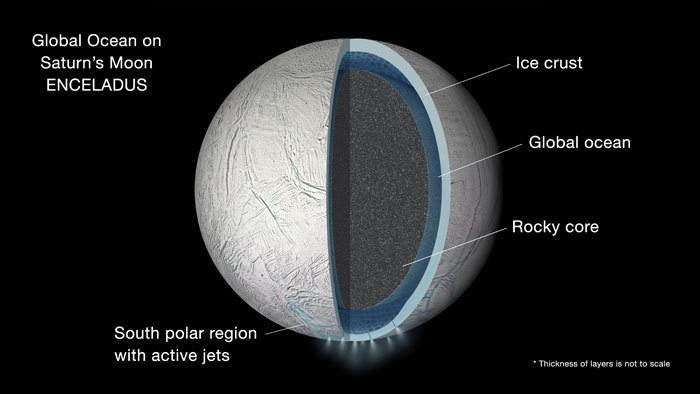 These so-called librations were entered into computer simulations, which disproved the notion that such movements could be reconciled with Enceladus having a solid, connected structure throughout.

"This is a major step beyond what we understood about this moon before, and it demonstrates the kind of deep-dive discoveries we can make with long-lived orbiter missions to other planets," said co-author Carolyn Porco. "Cassini has been exemplary in this regard."

It was only last year that NASA discovered traces of an ocean below the surface of Enceladus, although at the time the researchers believed the underground body of water was limited to the moon's south pole. Now we know it's far more widespread than that, and that the water vapour plumes and evidence of hydrothermal activity emanating from the moon's surface are fed by this vast global ocean.

But why is Enceladus's underwater ocean not frozen? After all, it's trapped between an inert rocky core and a frozen external surface. The researchers aren't entirely sure, but plan to investigate if the tidal forces stemming from Saturn's gravity are actually generating way more heat than previously assumed, which could be what's keeping everything liquid down there.

In any case, Enceladus is in good company. It's one of many ocean worlds out there in the Solar System – and some of these watery environments could potentially sustain life.

The findings are published in Icarus.