A colossal magnetic field stretching between two clusters of galaxies has been observed for the first time. Roughly a billion light-years away, the 'bridge' of radio-emitting plasma spans 10 million light-years, following a filament in the mysterious cosmic web that connects the Universe.

The space between clusters of galaxies isn't completely dark and empty. Long strands of diffuse and tenuous gas and plasma stretch between them; these are called filaments, the entire network of which constitutes the cosmic web.

But they're very difficult to study, as faint as they are in a Universe teeming with bright things.

Previous observations with ground-based radio telescopes had shown 'haloes' of radio emission indicating the presence of a magnetic field in the central region of some clusters - some of which contain thousands of galaxies - but no one had ever seen a magnetic field connecting one cluster to another.

So the discovery of a magnetic field in the filament between merging clusters Abell 0399 and Abell 0401 is something extraordinary.

"Our group had discovered that both clusters have a radio halo. More recently, the Planck satellite has shown that the two systems are connected by a thin filament of matter," said astronomer Federica Govoni of the National Institute for Astrophysics in Italy (INAF).

"The presence of this filament stimulated our curiosity and prompted us to investigate whether the magnetic field could extend beyond the center of the clusters, permeating the filament of matter that connects them." 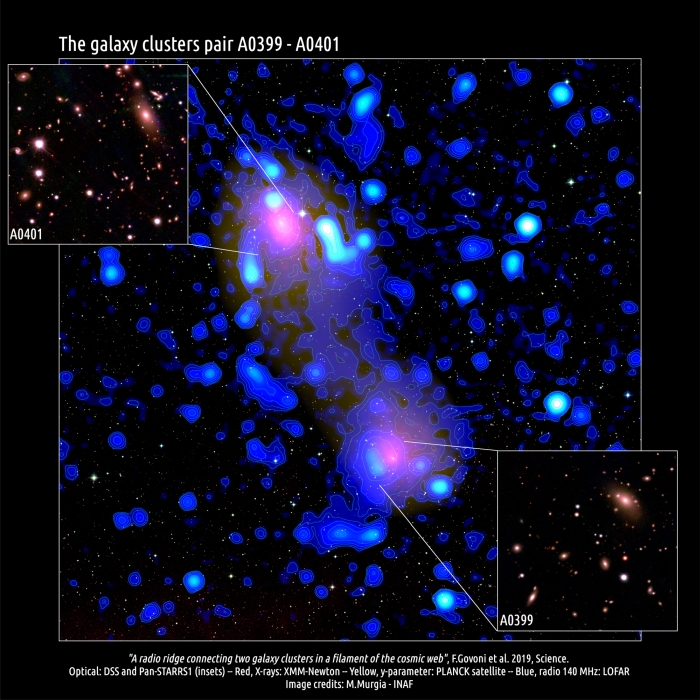 This is synchrotron radiation produced by electrons zipping along the filament at relativistic velocities, only possible if the magnetic field is acting as a synchrotron, or particle accelerator.

"We typically observe this emission mechanism in action in individual galaxies and even in galaxy clusters, but never before has a radio emission been observed connecting two of these systems," said INAF astronomer Matteo Murgia.

But there is a slight hiccup: the electrons are covering way more distance than is expected - which means there has to be another element at play. And that element could be the clusters themselves.

Even though they're separated by a distance of millions of light-years, Abell 0399 and Abell 0401 are creating a great deal of gravitational disturbance in the space around them as they draw inexorably closer together.

The team ran computer simulations to see if any of the dynamics of this merger could be influencing the acceleration of the electrons. Lo and behold, they found an answer. In the simulations, shock waves generated by the merger re-accelerated high-speed electrons, resulting in an emission consistent with the LoFar observations.

But that's just one potential mechanism. We won't know for sure until more observations are made.

We also don't know if other filaments also contain magnetic fields, or if it's a property unique to Abell 0399 and 0401, or if it's only found in merging galaxies.

If their origin is something common, such as supernovae, there could be more of them around than we could have ever guessed.

It's certainly given scientists a lot to think about. Not to mention how awesome it is to see  scientists following a hunch, and having it pay off.

"With great satisfaction," Govoni said, "the image obtained with the LoFar radio telescope confirmed our intuition, showing what can be defined as a sort of 'aurora' on cosmic scales."