Hubble has embarked on a new observation mission: to study the farthest reaches of the Universe, using some of the most massive objects in the Universe - galaxy clusters.

And this newly released picture shows how.

At the centre is Abell 370, a cluster of a few hundred galaxies located around 4 billion light-years from Earth. And arrayed around it, never seen before, are thousands of galaxies, out even farther in the depths of space.

The reason we can see them now is because of Abell 370. All those hundreds of galaxies, clustered so close together, and the associated dark matter, create an immense field of gravity. 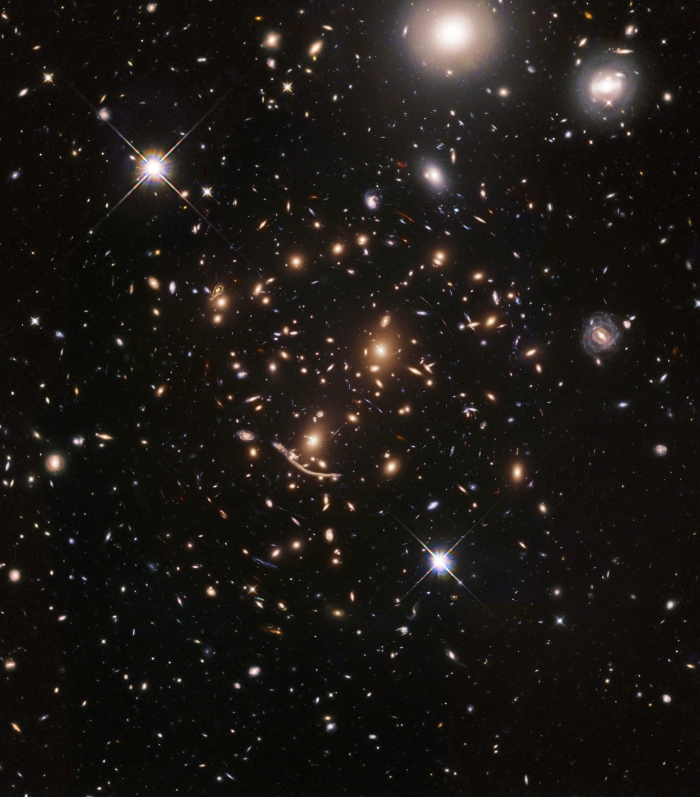 When the light behind that field passes through it, the gravitational force is so strong that it bends the path of the light. This creates a magnifying effect called gravitational lensing, allowing us to see objects we usually can't.

Abell 370 is the first of these clusters.

Any object with significant mass can create a gravitational lens astronomers can work with. The higher the mass, the stronger the lens.

In the case of Abell 370, the lensing effect is so strong that it can reveal galaxies not even Hubble's sensitive long-range instruments would be able to glimpse.

This is the effect being exploited by a new survey. Beyond Ultra-deep Frontier Fields And Legacy Observations (BUFFALO) is going to peer deeper into the six regions studied by the Hubble Space Telescope in the earlier Frontier Fields survey by focusing on galaxy clusters to see what's behind them.

In the image, you can see the galaxies in Abell 370. The brightest yellowish white ones are huge, containing hundreds of billions of stars. The bluer ones are smaller, spiral galaxies, like the Milky Way, with younger populations of stars. And the dimmer, yellower galaxies are older, with ageing star populations.

The galaxies behind Abell 370 appear as smeared lines of light. The most spectacular, to the lower left of the centre, is nicknamed the Dragon (possibly for its resemblance to a Chinese dragon), with its head to the left. It's made up of five images of the same spiral galaxy, magnified and stretched by the gravitational lens.

Astronomers can look at these images and learn more about the smeared galaxies - and that's what BUFFALO aims to achieve.

By using gravitational lenses, researchers from the Niels Bohr Institute in Denmark and Durham University in the UK hope to learn more about when the most massive and luminous galaxies in the Universe formed, and how this formation is linked to dark matter assembly.

They will try to figure out how quickly galaxies formed in the first 800 million years after the Big Bang, and try to gain a deeper understanding of the evolution of lensing galaxy clusters and the dark matter inside them.

The first step will be mapping that dark matter. This is something the lensing can also help with. Stronger lensing means stronger gravity, and once the gravity of the galaxies in the field has been subtracted, what's left is dark matter.

"By expanding the area that we map around each of these clusters, we will significantly improve our estimate of the clusters' magnification, a mandatory step for studying the distant galaxies that BUFFALO will discover," said astrophysicist Mathilde Jauzac of Durham University's Center for Extragalactic Astronomy.

"Plus, BUFFALO will allow us to map precisely the distribution of dark matter in these massive clusters, and thus trace their evolutionary history, a missing piece of information in today's evolution theories."

The BUFFALO survey is planned to take place over the course of 101 Hubble orbits - amounting to around 160 hours of observing time with the telescope. It will be able to detect distant galaxies around ten times more effectively than the Frontier Fields survey - shedding a (magnified) light on a poorly understood time in our Universe's history.

While we wait, though, you can head over to the Hubble website to pore over this image in high resolution, or download it as a wallpaper.