Survey: The Vast Majority of Americans Actually Do Trust Scientists

If you spend any time on social media, it can seem that the general public doesn't have much confidence in science. People are still arguing that Earth is flat, vaccinations cause autism, or climate change isn't caused by humans, while science communicators keep providing evidence on topics that have been considered settled for decades or even centuries.

All this misinformation can get a bit overwhelming, especially if you're not closely familiar with science and evidence-based reasoning. (Or, if you work at a science news site and see this mistrust in the comment section on a regular basis.)

But a new survey by the Pew Research Center has provided a sliver of good news, finding that a huge 86 percent of US adults have confidence in scientists to act in the best interests of the public.

This is up from 76 percent just three years ago. The survey also found over 60 percent of US adults trusted the scientific method to deliver accurate conclusions. The survey is of 4,464 adults which Pew states is a nationally representative panel of randomly selected participants, conducted in January this year.

Although these surveys aren't 'science' in the same way a research study or paper is, they still give us some interesting information about the state of the country.

The results weren't all positive though, as Pew data also show that our political ideologies still separate us when it comes to science. Republicans were nearly 20 percent less likely than Democrats to think that scientists should take an active role in policy debates.

Republicans were also less likely to believe that scientific experts are better at making science policy judgements when compared to other people. 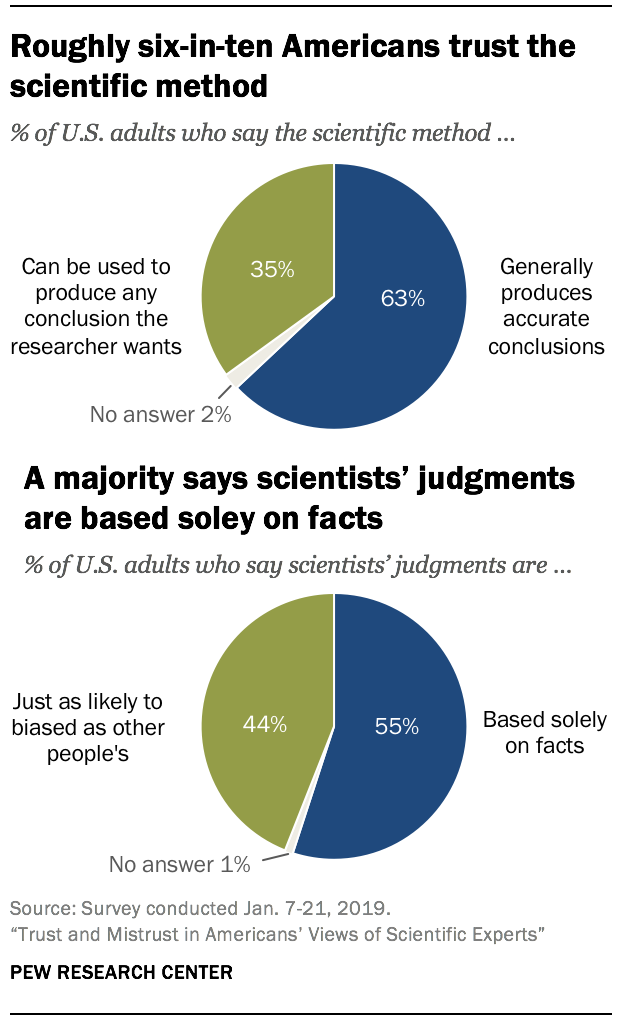 Those with more science knowledge also have higher confidence in scientists, which is not really surprising, but definitely makes the case for more science literacy in schools.

"There are wide political divides on beliefs about climate, energy and environmental issues. Such divides have been present for more than a decade. But divisions over GM foods, childhood vaccines, and other science-related issues fall on along other lines, not party affiliation," Cary Funk, director of science and society research at Pew, told Gizmodo.

"It's difficult to pin down the reasons for the upturn in public confidence … one thing to note is that the increase in confidence occurs among both Democrats and Republicans."

We'll take the wins where we can get them, so give yourself a pat on the back - most of you still trust scientists, even if it might not seem that way in the comment section (that may or may not be flooded with misinformation, anyway.)

You can read more about the survey results here.