Plugging structural holes with wastepaper seems like an unconventional way to stop a draught. What's even more unconventional is using top secret documents devised by one of the greatest code-breaking minds in human history.

But this is apparently what happened in Hut 6 at Bletchley Park, where the famous mathematician Alan Turing and his colleagues cracked the codes of the German Enigma machines, enabling Allied Forces to anticipate Nazi movements.

The famous British code-breaking compound, which employed roughly 10,000 people during WWII, was shrouded in secrecy for nearly three decades afterward, with former staff prohibited from talking about their wartime duties.

More recently, however, the site has become a big tourist draw, and in 2013 multi-million dollar restoration effort began to salvage some of the decrepit buildings, including some of the huts occupied by Turing and his colleagues.

Renovations on one of the buildings, Hut 6, turned up top secret documents stuffed into holes in the ceiling. What's more, is that these papers are believed to have been created by Alan Turing, and should have been destroyed under British wartime laws.

One of the recovered Turing documents Credit:Bletchley Park Trust

The documents have been identified as 'Banbury sheets', and may be the only surviving examples of these code-breaking tools, which had holes punched through them to allow manual comparison of enciphered texts. The cards, which were given their name because they were printed in Banbury, England, exploit a cryptology technique known as banburismus which was developed by Turing to more efficiently search for repeat patterns in the German code.

"The fact that these papers were used to block draughty holes in the primitive hut walls reminds us of the rudimentary conditions under which these extraordinary people were working." 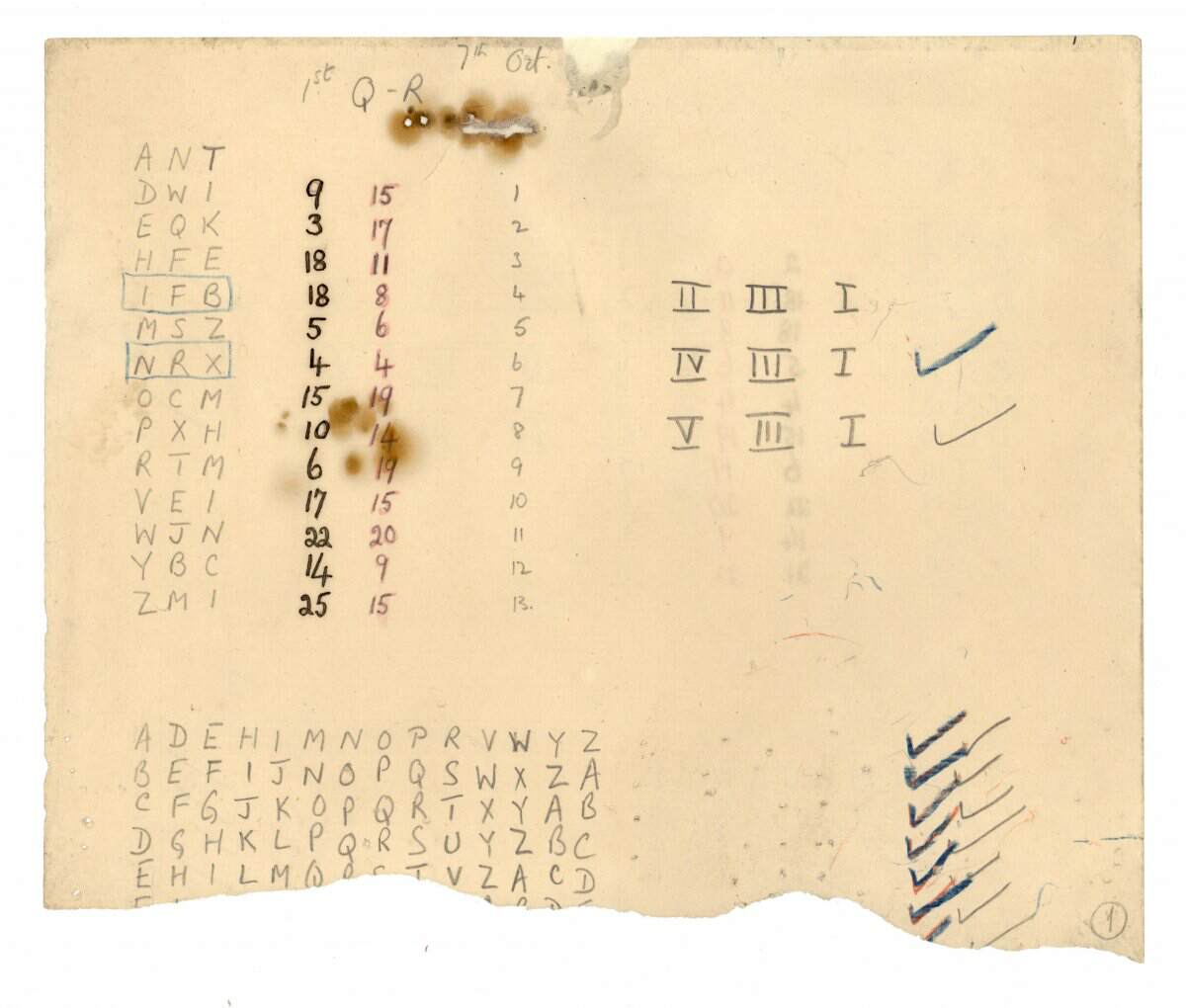 The huts at Bletchley Park were designed to be temporary structures that could be easily demolished after the war, and the conditions inside were known to be pretty grim. Fortunately for us, it means documents that legally should have ended up in an incinerator for the purposes of national security, have survived, albeit crumpled up and hidden inside a ceiling for the better part of 70 years. (And if you're wondering why they look so good in the images, it's because they were frozen at the time of discovery to prevent further damage, and later cleaned and repaired).

In addition to the Banbury sheets, other code-breaking documents were recovered that couldn't be identified, Bletchley Park's Director of Learning and Collections, Victoria Worpole, said in a statement.

"Nobody seems to be able to work out what they are – we've sent things off to Government Communications Headquarters — and there are a number of items that we've yet to understand properly. We're unveiling a mystery."

The Turing Digital Archives already contain a number of personal letters, notes, photographs, and unpublished papers written by the man who is considered to be one of the fathers of computer science and artificial intelligence. Now, it seems, there will be more documents to add to the already rich collection.

Trending News
Six Minutes of Intense Exercise Boosts a Crucial Molecule in Your Brain Health4 days ago
Scientists Have Built a Macroscopic Tractor Beam Using Laser Light Physics4 days ago
Some People's Brains Are Wrinklier Than Others, And Now We Know Why Health4 days ago