All The Ways Caffeine Affects Your Body in One Handy Infographic 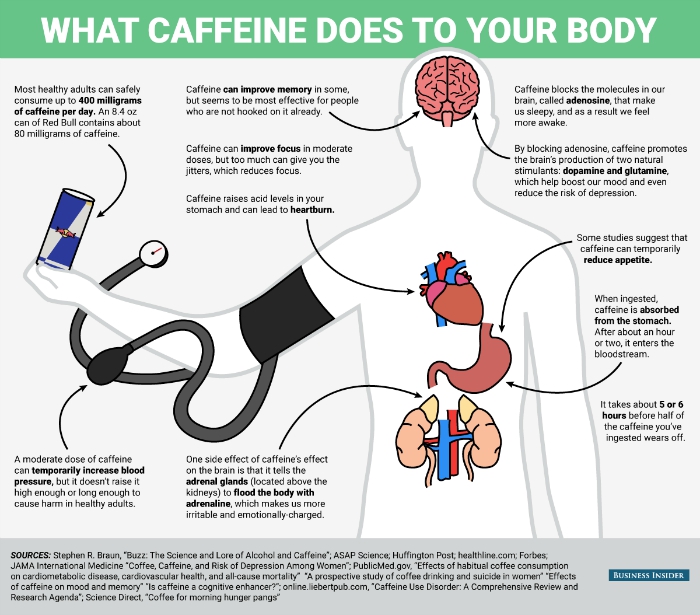 Caffeine is the most widely used drug in the world, but most of us don't really know or care exactly what goes on inside our bodies when we drink our morning cup of coffee. Obviously it help us wake up and focus, but caffeine actually has some much broader much broader, and in some cases, more surprising effects. This Business Insider infographic (high res version here) summarises them all for you, so that you can really appreciate how much your flat white does for you.

For starters, let's set the record straight on how much caffeine your body can really handle. For most of us that's around 400 milligrams per day, or five Red Bulls (interesting fact: the amount of caffeine you can drink is actually determined by your genes) but if you're anything like me, that amount would make you incredibly jittery.

That's because when caffeine hits our bloodstreams, around one to two hours after being ingested, it increases our blood pressure and tells our adrenal glands to pump out more adrenaline, which makes us irritable and emotionally charged.

On the plus side, it also triggers the release of dopamine and glutamine in the brain, which help boost mood and reduce the risk of depression. It also blocks a molecule called adenosine in the brain, to stop us from feeling sleepy.

In addition to improving focus, studies have shown that caffeine also has the ability to improve people's memories, although it seems that the effects aren't so impressive for people who are already hooked on it.

Not mentioned on this infographic is the fact that, for many of us, coffee also makes us poop. This effect is linked to the drink itself, rather than caffeine, but research has shown that there's a pretty fascinating reason for why our morning cup of coffee sees us running to the bathroom.

The sad part of all of this is that the effects of caffeine do wear off, usually after around five or six hours. Although for many of us, it feels a lot quicker, and we're usually reaching for our next cup pretty soon after our first.

So now that you know how important caffeine is, make sure you're drinking it correctly for maximum effect: