Scientists have used super high-speed cameras to capture the moment liquid droplets combine together, providing a unique, preternatural glimpse of fluid dynamics the human eye can't observe on its own.

Using an experimental setup involving two synchronised high-speed cameras – one shooting from the side, and the other looking upwards (courtesy of a mirror angled under a glass slide) – the researchers were able to study the interaction of two separate droplets, as a dyed blue impactor connected with a clear droplet resting still on the glass surface.

"In the past, there have been instances when two droplets impact and you were left wondering whether they have mixed or has one droplet just passed over the other," says fluid mechanics researcher Alfonso Castrejón-Pita from the University of Oxford.

"Having two cameras record the droplet interaction from different viewpoints answers that question." 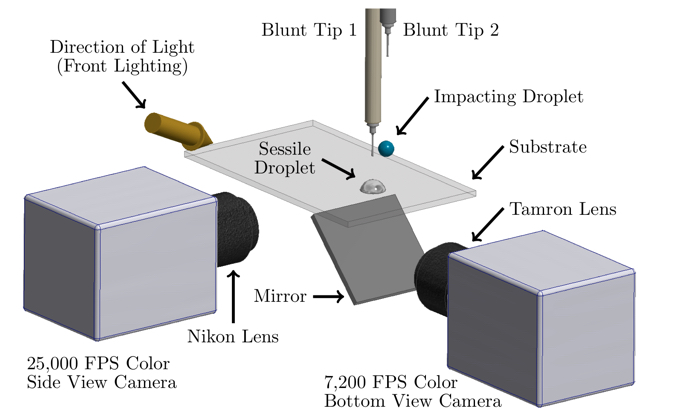 In the footage captured, you can see the blue droplet – dripped from a pump suspended above the slide – pass over the top of the clear droplet like a blanket, creating a surface jet that forms in less than 15 milliseconds (15 thousandths of a second) after the pair coalesce.

The image recorded from the camera at the side shows that the blue droplet is sitting on top of the clear droplet, with surface tension preventing mixing from happening.

"Given sufficient lateral separation between droplets of identical surface tension, a robust surface jet is identified on top of the coalesced droplet," the research team, led by first author Thomas C. Sykes from the University of Leeds, explains in their study.

"Image processing shows this jet is the result of a surface flow caused by the impact inertia and an immobile contact line."

But two droplets don't always become one droplet the exact same way. The surface jet created in this kind of event can be enhanced or even suppressed, depending on manipulations of surface tension. This is an example of a phenomenon called the Marangoni effect, which affects mass transfer along an interface between two fluids.

The side view, showing that the droplets are not mixing while the surface tension persists. (University of Leeds)

Aside from being pretty to watch, understanding the fluid dynamics at work here could lead to new advancements in the field of 3D printing, helping us learn how globular chemicals will react when they are dropped by the printer beside one another.

Of course, you need some pretty high-end imaging to capture this minute coalescing as it happens – a feat made possible here by cameras operating at up to 25,000 frames per second.

"The imaging techniques developed have opened-up a new window on droplet technology," explains mechanical engineer Mark Wilson from the University of Leeds.

"We were able to expose the internal flows, whilst imaging at a sufficient speed to capture the fast dynamics."

The findings are reported in Physical Review Fluids.