An amateur metal detectorist has hit the motherlode: a cache of bronze treasures in Gloucestershire, dating back to the last decades of the Ancient Roman occupation of Britain.

The find, which is being hailed as the first such in British history, mostly consists of broken pieces, but one is intact - a bronze statue of a "licking dog", the first of its kind ever found in Britain.

"It's not every day you come across a hoard of roman bronze! We have been metal detecting for a combined 40 years, but this is a once in a lifetime discovery," said Pete Cresswell, who found the hoard metal detecting with his brother-in-law Andrew Boughton.

"As soon as I realised the items were of historical significance I contacted the local archaeology team, who were equally excited by the find. It's a great privilege to be able to contribute to local and British history."

The dog statue, archaeologists believe, is an example of a healing statue. Dogs were considered a healing totem, since they would aid their own healing by licking their wounds.

Other dog statues have been recovered from the site of a healing shrine in Lydney, Gloucestershire, although not of the "licking" variety.

Cresswell's find could also be associated with this shrine and the healing cult thought to have worshipped there - but it could also indicate another undiscovered healing temple in the area.

What's interesting about the fragments, dated between 318 and 450 AD, is that they appear to have been deliberately broken and hidden. Archaeologists working on the find believe that they may have been stashed by a metalworker who hoped to melt them down at a later date and re-cast them.

"This Roman hoard dates to the 4th century and mostly contains items that have been deliberately broken, ranging from small vessel fittings to a large bronze statue," said archaeologist Kurt Adams.

"Most amazing of all is a complete and finely detailed standing dog statue, which is a unique find for British archaeology."

The find is being kept under special conditions at the Bristol Museum, and the location it was found is not being disclosed at this time. No doubt, however, that local treasure hunters are galvanised. 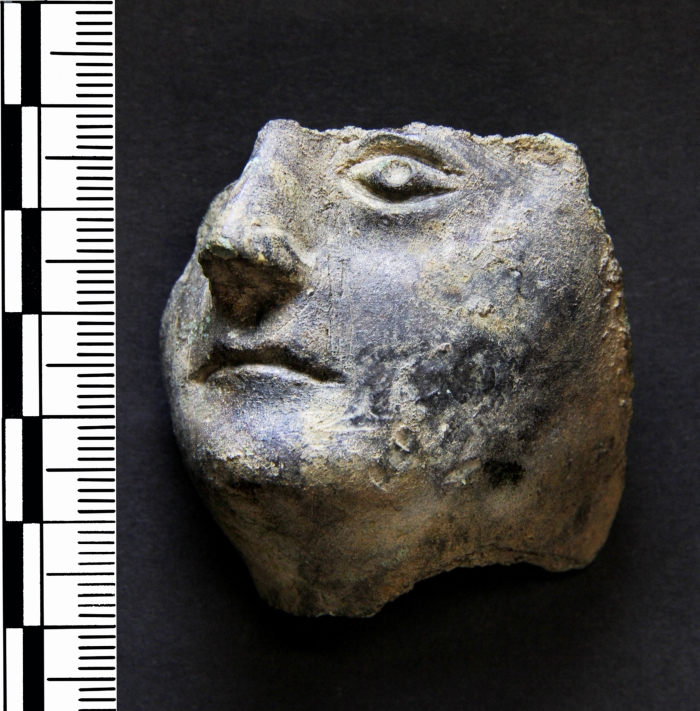 "How wonderful to have made such an astonishing discovery, and what a fantastic coup for Gloucestershire!" said councillor Nigel Moor of Gloucestershire County Council.

"The prospect of more hidden treasures buried here in the county is an exciting one indeed for local residents and historians alike."

Experts are currently working on the hoard, and will present their findings at a special event at the British Museum towards the end of this year.

Meanwhile, you can check out the cache online at the UK Portable Antiquities Scheme database, and watch Cresswell's fabulous video unearthing the find below (you can skip to 7'50" if you want to go straight to the licking dog).