Ancient Llama, Discovered in Stone Box Under a Lake, Was Likely a Gift to Inca Gods

The bed of Lake Titicaca, the largest freshwater lake in South America, is turning out to be a veritable museum of ancient offerings.

Once sacred to the Incas and before that the Tiwanaku, this body of water, nestled between Bolivia and Peru, is littered with sunken sacrifices from centuries ago.

After years of searching, archaeologists have now retrieved the first underwater offering not yet damaged or looted by opportunists: a box of volcanic rock, submerged around 500 years ago.

Upon opening this tightly-sealed sacrifice in front of local Indigenous leaders, the research team discovered an ancient llama, carved from the shell of a spiny mollusc called a spondylus from Ecuador, and a furled sheet of gold, thought to be part of a bracelet.

If historical accounts from the invading Spanish are right, the box may have once even held the blood of children or animals, although no human remains have been found in the lake to date.

"The underwater heritage of Lake Titicaca still has many surprises to reveal."

But this new find was in an entirely different part of the lake, which was previously not known to be sacred to the Inca.

In the fifteenth and sixteenth centuries, as the Inca Empire was expanding out from the Andes, it's thought that Lake Titicaca became a culturally and religiously significant hub.

In fact, its main island is said to be the birthplace of the first two Incas and also their Sun God - hence the name, Island of the Sun.

In recent years, a nearby underwater reef, called the Khoa reef, has been found littered with at least 28 stone boxes in various conditions, and yet only a handful still contain miniature figurines of gold, silver, or shell.

Judging by the marks on their sides, scientists think these sacrificial boxes were likely lowered down into the water by the Incas as some sort of sacrifice to the gods.

The newly-found stone box has similar markings, suggesting it too was lowered into the water, and on the inside, its contents resemble other Incan offerings.

But this stone box was not found near the Island of the Sun or the Khoa reef. Instead, it was uncovered at a different reef, known as the K'akaya, located almost directly north of the others.

A thorough survey of the reef revealed the box was entirely on its own. And while the authors can't yet be sure, they think the K'akaya box illustrates a religious practice similar to what was once sunk near the Island of the Sun.

"One of the goals of our underwater archaeological survey was to identify the existence of similar sites and to our surprise we found at least one," says Delaere.

"It presents not only one of the rare intact discoveries of an Inca underwater offering, but also that it was found at another place in the lake, which has an important implication for understanding the relationship between the expanding Inca empire, the local communities who lived in the lake, and Lake Titicaca itself prior to European contact."

Macroscopic analysis suggests the K'akaya box has a similar fine cut and polish to Khoa boxes. And while the team is still waiting for the results of their geochemical analysis, the volcanic rock used to manufacture the boxes, they say, appears to be identical.

The only other difference is that the Khoa boxes are usually cube-shaped with a cap, while the K'akaya box is rectangular, with a plug. This isn't enough to keep it waterproof, so even if this offering once held blood, that liquid has long since been replaced by the lake.

In the 17th century, an Augustine cleric reported on extensive Incan rituals at Lake Titicaca, where he says the blood of children and animals was placed in stone boxes and lowered with ropes into the lake from atop a raft, where it turned the water red.

"The location and orientation of the K'akaya's offering seem deliberate," the authors surmise.

"The K'akaya reef is almost directly north of Khoa, suggesting a strong spatial link between the two sites." 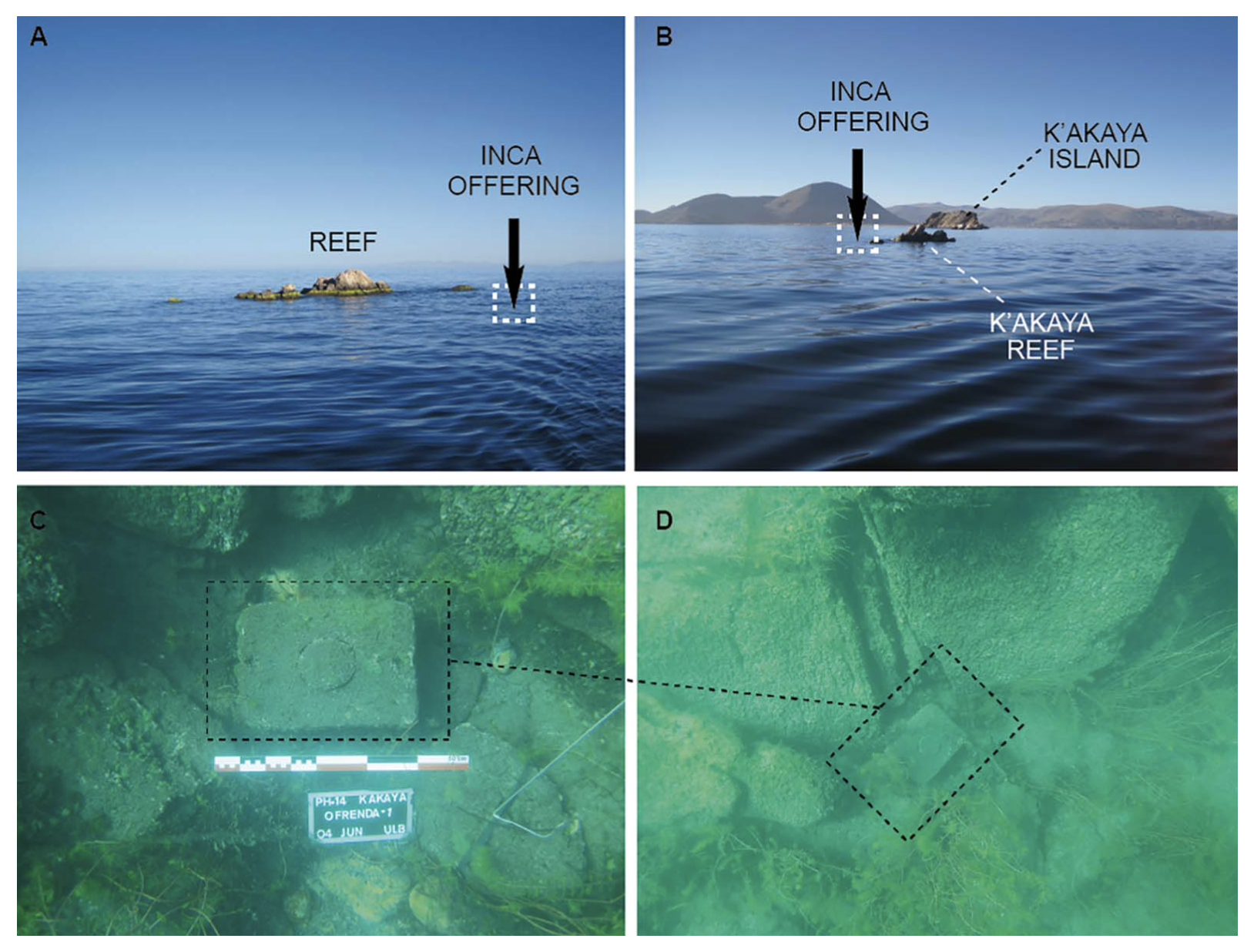 View of the K'akaya reef and position of the offering with respect to K'akaya Island. (Christophe Delaere)

The reef also faces the two tallest peaks in the region, and these were revered by the Incas as well. Perhaps the box was sunk near this lake-born summit as a sacrifice for the mountain gods.

We may never know, but the search among Lake Titicaca's reefs continue...