An Astronomer Explains Why Your 'Star Sign' Is Probably Wrong

I was born a Capricorn (please don't judge me), but the Sun was in the middle of Sagittarius when I was born.

As a professor emeritus of astronomy, I am often asked about the difference between astrology and astronomy. The practice of astrology, which predicts one's fate and fortune based on the positions of the Sun, Moon, stars and planets, dates back to ancient times.

It was intermingled with the science of astronomy back then – in fact, many astronomers of old made scientific observations that are valuable even today.

But once Copernicus, Kepler and Galileo realized the planets orbit the Sun, rather than the Earth, and Newton discovered the physical laws behind their behavior, astrology and astronomy split, never to be reunited.

The science of astronomy is now at odds with one of the basic organizing principles in astrology – the dates of the zodiac.

The constellations of the zodiac

Over the course of a year, the Sun appears to pass through a belt of sky containing 12 ancient constellations, or groupings, of stars. They are collectively called the zodiac and consist almost entirely of animal figures, like the ram (Aries), crab (Cancer) and lion (Leo).

It is a disappointment to many that the constellations only rarely look like what they represent. How could they, since they are truly random scatterings of stars? They are meant to represent, not to portray.

Although the constellations of the zodiac, which date back to Mesopotamia or before, may seem definitive, they are only one example of those produced by the various cultures of the world, all of which had their own, frequently very different, notions of how the sky is constructed.

The Incas, for example, made constellations not from stars, but from the dark patches in the Milky Way.

The number of constellations in the Western zodiac comes from the cycles of the Moon, which orbits the Earth 12.4 times a year.

Roughly speaking, the Sun appears against a different constellation every new Moon, the stars forming a distant backdrop to the Sun.

Though the stars are not visible during daytime, you can know what constellation the Sun is in by looking at the nighttime sky. There you will see the opposite constellation. 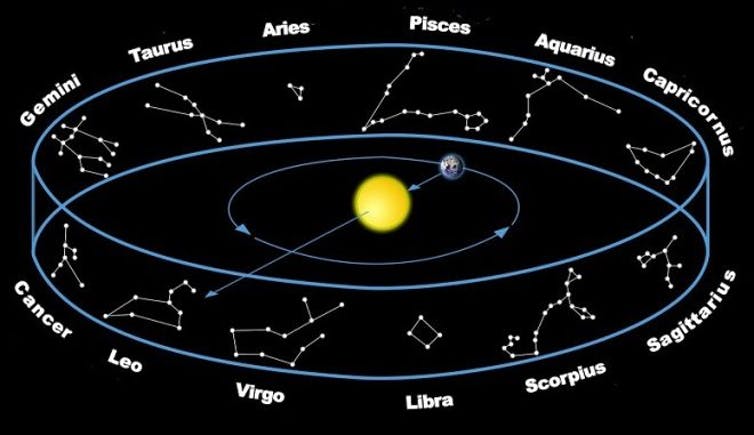 The Sun is in Leo here, which means at night, you'd see Aquarius. (PNGGuru, CC BY-NC)

Astrology suggests that each sign of the zodiac fits neatly into a 30-degree slice of sky – which multiplied by 12 adds up to 360 degrees.

Precession of the equinoxes

The main reason astrological signs fail to line up with the zodiac, though, is a wobble in the Earth's rotational axis called precession.

As a result of its rotation, the Earth bulges slightly at the equator, not unlike how a skater's skirt fans out as she spins. The gravity of the Moon and Sun pull on the bulge, which causes the Earth to wobble like a top. The wobble causes the Earth's axis, which is the center line around which it rotates, to swing in a slow circle over the course of 25,800 years.

This movement alters the view of the zodiac from Earth, making the constellations appear to slide to the east, roughly a degree per human lifetime. Though slow, precession was discovered with the naked eye by Hipparchus of Nicaea around 150 BCE.

In ancient times, the vernal equinox – or the first day of spring – was in Aries. Due to precession, it moved into Pisces around 100 BCE, where it is now and will remain until CE 2700, when it will move into Aquarius and so on. Over the course of 25,800 years, it will eventually return to Aries and the cycle will begin again. 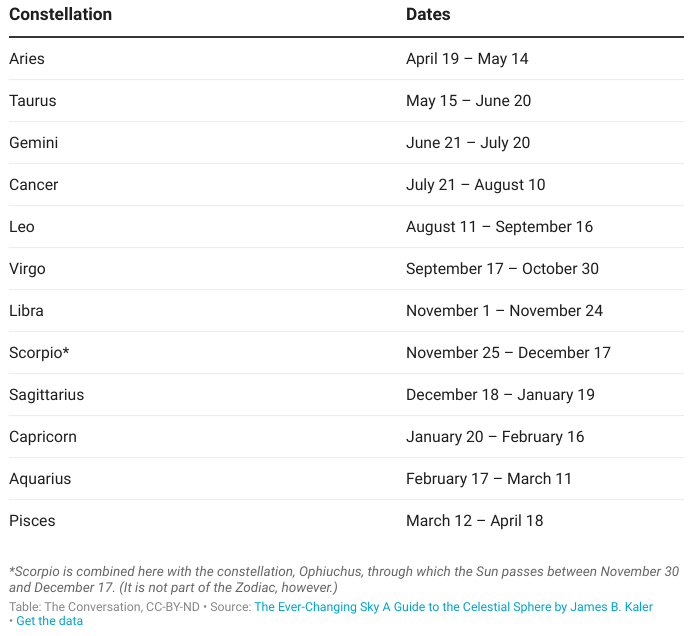 As a game, astrology and its predictions of fate and personality can be fun. However the subject has no basis in science. It is to science what the game "Monopoly" is to the real estate market.

Astrology diverts attention away from the very real influences of the planets, primarily their gravitational effects on one another that cause real changes in the shapes, sizes and tilts of their orbits. On Earth, such changes likely caused past ice ages. Direct collisions between Earth and celestial bodies can cause very rapid changes, such as the impact of an asteroid off the Yucatan Peninsula 66 million years ago that had global effects including the disappearance of dinosaurs and the rise of mammals.

Astronomical studies will eventually allow the prediction of such events, while astrological predictions will get you absolutely nowhere.

This story has been updated to correct the animal that Aries represents.