Astronomers Detect a Fascinating Green Glow in The Atmosphere of Mars

High in the atmosphere of Mars, astronomers have found a phenomenon they've been hunting for decades: a faint green glow, caused by the interaction between sunlight and oxygen in the upper atmosphere.

Previously, this glow has only been detected in one place: the sky above Earth. Its discovery in the Martian atmosphere will help us better understand the processes that drive airglow, both on Earth and elsewhere.

"One of the brightest emissions seen on Earth stems from night glow. More specifically, from oxygen atoms emitting a particular wavelength of light that has never been seen around another planet," said astronomer Jean-Claude Gérard of the Université de Liège in Belgium, the lead author of the new paper describing the phenomenon.

"However, this emission has been predicted to exist at Mars for around 40 years - and, thanks to [ExoMars Trace Gas Orbiter], we've found it."

Earth's sky is never completely dark, not even at night, even once you've extracted light pollution, starlight, and diffuse sunlight. The molecules in the atmosphere are constantly undergoing various processes, which causes them to faintly glow across a range of wavelengths.

The glow is not dissimilar to aurora, since it's produced by the same particles - except it's much fainter, and the mechanisms behind it are different. Aurora is produced by charged particles from the solar wind which ionise atmospheric atoms, causing them to form dancing lights across the sky.

Airglow, on the other hand, is caused by the interaction between sunlight and the atmosphere, and falls broadly into two categories. There's nightglow; this occurs when atoms broken apart by solar radiation during the day recombine, releasing their excess energy in the form of photons. Nightglow has previously been observed on both Venus and Mars, as well as Earth.

What astronomers have now observed in the atmosphere of Mars is dayglow - a phenomenon that's much harder to detect, given that its faint presence is vastly outshone by broad daylight.

On Earth, it occurs when molecules in the atmosphere absorb sunlight, which gives them excess energy they emit in the form of radiation at the same or slightly lower frequency as the radiation absorbed in the first place.

In images of Earth taken from the International Space Station, when the camera is looking across the top of the atmosphere rather than straight down, the airglow is much more visible.

On the Red Planet, such dayglow was predicted in 1979, but Mars orbiters, facing directly at the Martian surface, had failed to detect it until now. 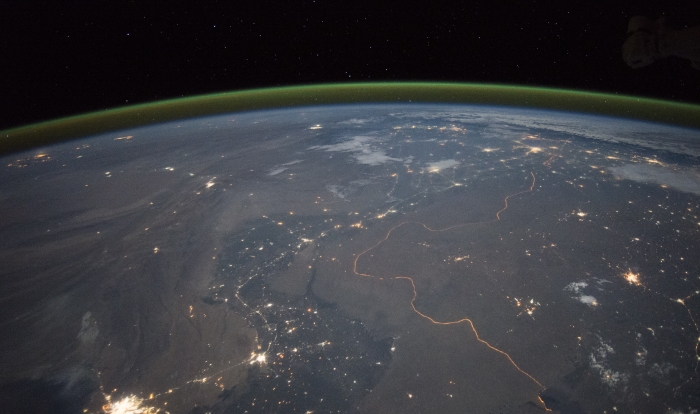 So, learning from the ISS, the team reoriented the Nadir and Occultation for MArs Discovery (NOMAD) instrument from its position looking straight down at Mars, to looking across the atmosphere towards the Martian horizon. From this position, they took a range of observations of the Martian atmosphere, at a range of altitudes between 20 and 400 kilometres (12 to 250 miles).

When they analysed the data, they found the green emission in both optical and ultraviolet wavelengths, in all of the dayside observations.

"The emission was strongest at an altitude of around 80 kilometres and varied depending on the changing distance between Mars and the Sun," explained planetary aeronomer Ann Carine Vandaele of the Institut Royal d'Aéronomie Spatiale de Belgique in Belgium.

When the team modelled the process behind the emission, they found that it's produced by a process very similar to airglow on Earth. When solar radiation hits the Martian atmosphere, it splits apart carbon dioxide into carbon monoxide and oxygen. It's the oxygen atoms that are responsible for the green glow.

But there was something interesting, too. The emission's visible wavelength was 16.5 times more intense than its ultraviolet wavelength.

"The observations at Mars agree with previous theoretical models but not with the actual glowing we've spotted around Earth, where the visible emission is far weaker," Gérard said.

"This suggests we have more to learn about how oxygen atoms behave, which is hugely important for our understanding of atomic and quantum physics."

This discrepancy, the team notes, could be an issue with the way the instrument taking Earth observations has been calibrated. Obviously the best thing to do is a whole lot more science.