An Iceberg The Size of Delaware Is About to Break Off From Antarctica, And It's Really Bad News

Scientists have confirmed that an iceberg the size of Delaware is on the verge of splintering off from Antarctica and floating into the ocean.

A huge rift has been forming across Antarctica's Larsen C ice shelf for months, and in December it sped up at an unprecedented rate. The latest observations show there's now just 20 km (12.5 miles) of ice keeping the 5,000 square kilometre (1,930 square mile) iceberg from floating away.

"If it doesn't go in the next few months, I'll be amazed," one of the lead researchers, Adrian Luckman from Swansea University, told BBC News.

"It's so close to calving that I think it's inevitable."

When it splits off as an iceberg, it is expected to be one of the 10 largest ever recorded on the planet. Right now, scientists think that mass of ice might be the only thing stopping the entire Larsen C ice shelf from collapsing. 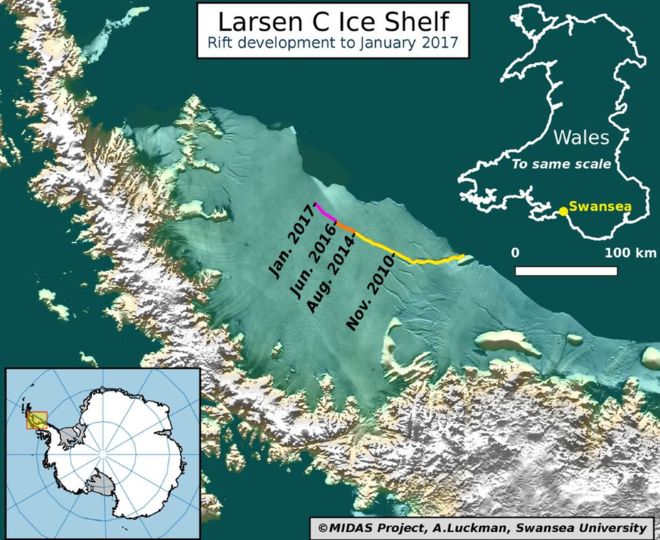 The Larsen C ice shelf is the fourth largest ice shelf in Antarctica, and it plays a crucial role holding back a significant amount of the continent’s ice.

The ice shelf is round 350 metres (1,150 feet) thick, and it floats on the ocean at the edge of West Antarctica, acting as a kind of 'stopper' that holds back the flow of glaciers into the ocean.

Because the ice shelf is already floating on the ocean, the melting  of Larsen C doesn't directly contribute to sea-level rise.

But with a huge part of that ice shelf about to cleave away, researchers are now very concerned about the future stability of the entire region.

"The calving of this large iceberg could be the first step of the collapse of Larsen C ice shelf, which would result in the disintegration of a huge area of ice into a number of icebergs and smaller fragments," said glaciologist David Vaughan from the British Antarctic Survey in a press release.

"Because of the uncertainty surrounding the stability of the Larsen C ice shelf, we chose not to camp on the ice this season."

The team have good reason to be concerned - two ice shelves have already collapse, the Larsen A ice shelf in 1995, and Larsen B in 2002.

After their disintegration, there was a dramatic acceleration of the glaciers behind them, resulting in huge volumes of ice entering the ocean and associated sea-level rise.

It's estimated that if all the ice currently held back by Larsen C entered the sea, ocean levels around the planet would rise by around 10 cm.

Because of this, researchers have been warily monitoring the growing rift in Larsen C for years.

But during December, it sped up rapidly, growing a further 18 km (11 miles) in just a couple of weeks. There's now just 20 km (12.5 miles) of ice holding the iceberg in place.

Despite not being able to camp on the ice shelf, the team is still monitoring the rift through satellite and ground observations in order to figure out exactly what's happening.

It's normal for ice shelves to produce an iceberg every few decades, but the rapid growth of the Larsen C crack has left the researchers concerned about how quickly the rest of the ice shelf will follow suit once it's gone.

Currently the team can't say for sure whether the unprecedented rate of ice shelf calving is a result of climate change, but there's evidence to suggest that rising temperatures have caused the ice shelf to thin.

All they can do for now is continue to monitor the situation, get as much data as they can, and hope for the best. Because if this iceberg breaks off, it's bad news from the rest of Antarctica.