One of the fundamental climate constants that has helped define and divide the United States for centuries is shifting in response to global warming, according to new research.

The 100th meridian west – the invisible line of longitude that roughly bisects the continental US in half – was historically seen as a boundary separating the humid eastern states from their arid western counterparts.

But thanks to climate change, the world is not what it once was, and neither is this intangible barrier.

According to a new analysis of rainfall and temperature data by climate scientist Richard Seager from Columbia University, the climate boundary that once traced the 100th meridian has effectively been shifting eastwards ever since the 1980s, with the arid conditions of the western plains slowly expanding into the midwest. 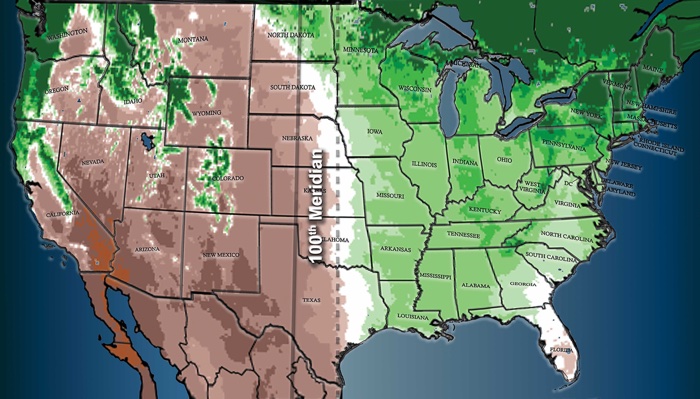 While the meridian itself – which continues beyond US borders, northwards into Canada, and southwards into Mexico – is in the same place as always, the climate barrier that used to sit on top of it has moved approximately 225 kilometres (140 miles) to the east, Seager says, placing it closer to the 98th meridian west.

So far, this shift hasn't significantly affected farming and land use as the dryer conditions move across the US.

But the team's modelling suggests altered precipitation and rising temperatures as the century progresses will see the "effective 100th meridian" continue its shift eastward for decades to come, as arid conditions slowly colonise the east.

"There will need to be a farm economy adjustment to this because of the environmental changes," Seager told Quartz.

"The places over the western parts of the high plains will become more arid." Specifically, the researchers suggest that as aridity increases thanks to rising evapotranspiration – where heat extracts moisture from the soil and removes it to the atmosphere – farms may need to consolidate and become larger to survive, or change their crops in response to reduced water resources.

"A farmer who was considering passing on her or his farm to their children over the next decade or two should be considering these kind of climate or environment changes," Seager told KUER.

"There has to be some kind of adjustment. They can't just carry on doing exactly what they're doing right now because of this encroaching aridity. "

In effect, unless we can turn our dangerous addiction to fossil fuels around, the researchers think the eastern US will progressively witness the climate contrasts first observed by American geologist and explorer John Wesley Powell back in the late 19th century.

Back then, he noted the environmental transitions that marked either side of this invisible – but not immobilised – divider.

"Passing from east to west across this belt a wonderful transformation is observed. On the east a luxuriant growth of grass is seen, and the gaudy flowers of the order Compositae make the prairie landscape beautiful," he wrote in 1890.

"Passing westward, species after species of luxuriant grass and brilliant flowering plants disappear; the ground gradually becomes naked, with bunch grasses here and there; now and then a thorny cactus is seen, and the yucca plant thrusts out its sharp bayonets."

The two-part study is published here and here in Earth Interactions.