There's a giant contradiction in the middle of the Arizona desert: an experimental city designed for thousands that now contains only a few dozen inhabitants.

For nearly five decades, a group called the Cosanti Foundation has been working to build a city that would inspire a new future of urban design. Today, the project is only 5 percent complete.

Called Arcosanti, the city was envisioned by Italian architect Paolo Soleri, whose dream was to create an advanced urban laboratory where everyday activities could be powered by Earth's natural resources.

Soleri dubbed his vision an "urban implosion" – referring to design that would promote density and reduce sprawl by eliminating cars and roads. (Ironically, the easiest way to reach the development in the Sonoran Desert is by car.)

Instead of light bulbs, rooms would be illuminated by the sun's natural rays, and instead of air conditioning, vegetation would provide natural shade.

A view of Arcosanti in 2011. (Wolfgang Kaehler/LightRocket/Getty Images)

But as construction on Acrosanti has languished, other cities and designers have started to surpass Soleri's ideas.

Nations like Qatar and Saudi Arabia are developing cities with pneumatic trash tubes, robot workers, drone taxis, and solar-powered skywalks. Malaysia is looking to build a city with self-watering plants and self-repairing windows. If Alphabet's planned community in Toronto comes to fruition, it could feature heated roadways for driverless vehicles and underground sensors.

Compared to these projects, Arcosanti's low-lying, half-domed structures and sand-coloured facades now look like parts of an outdated hippie village. 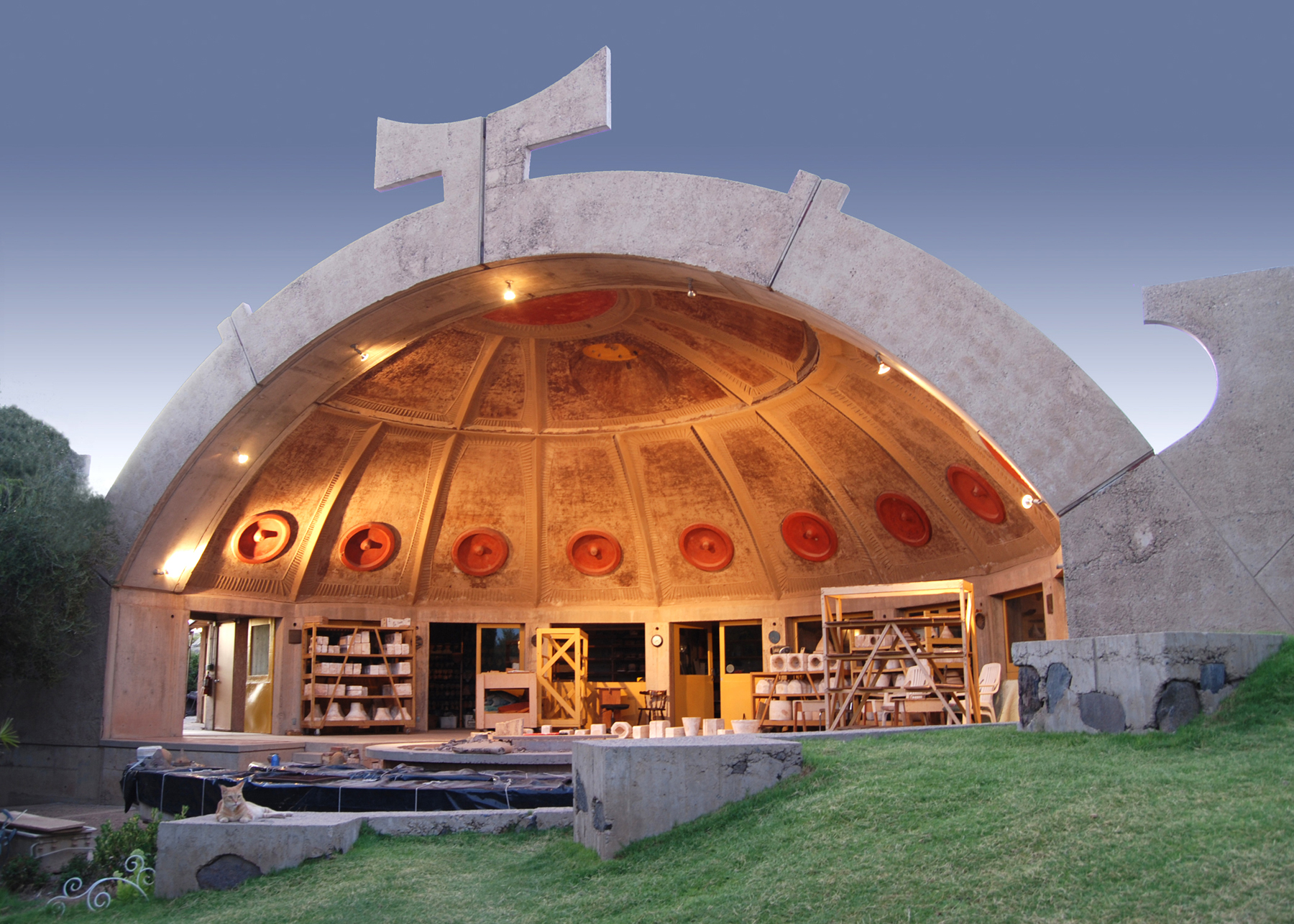 But Soleri's ideas are far from outdated. The architect was an early proponent of local food sourcing, solar energy, and walkable neighbourhoods – concepts that are now considered paragons of urban design.

With an inclusive vision and the right funding, these concepts still have the potential to help address issues like climate change and overcrowding.

The pitfalls of expensive ideas and cheap labour

By the time Soleri envisioned Arcosanti in the late 1960s, he had garnered acclaim as a protegee of Frank Lloyd Wright and an inductee to the Museum of Modern Art. He and his wife had also founded the Cosanti Foundation, a non-profit organisation that owns the land where Arcosanti now sits.

By 1970, Soleri was breaking ground on the first Acrosanti structures, which he described in his book, "The City in the Image of Man."

The land for Arcosanti was purchased with a loan, but the labour was free. Soleri had accrued a following of students, architects, journalists, filmmakers, and others who volunteered to help bring his vision to life. Soleri lived on the premises and often worked beside them, laying the groundwork for his utopia wearing a T-shirt and swim trunks.

But many of the architect's concepts turned out to be expensive and difficult to finance. Funding waned, and the site's construction slowed. In time, Soleri's original following began to dwindle as well.

"The original people working there either got frustrated and left, or stayed there and got older and settled into their cosy, Soleri-designed apartments to live a pleasant, hippy-dream life," wrote James McGirk, a former attendee of an Arcosanti workshop. 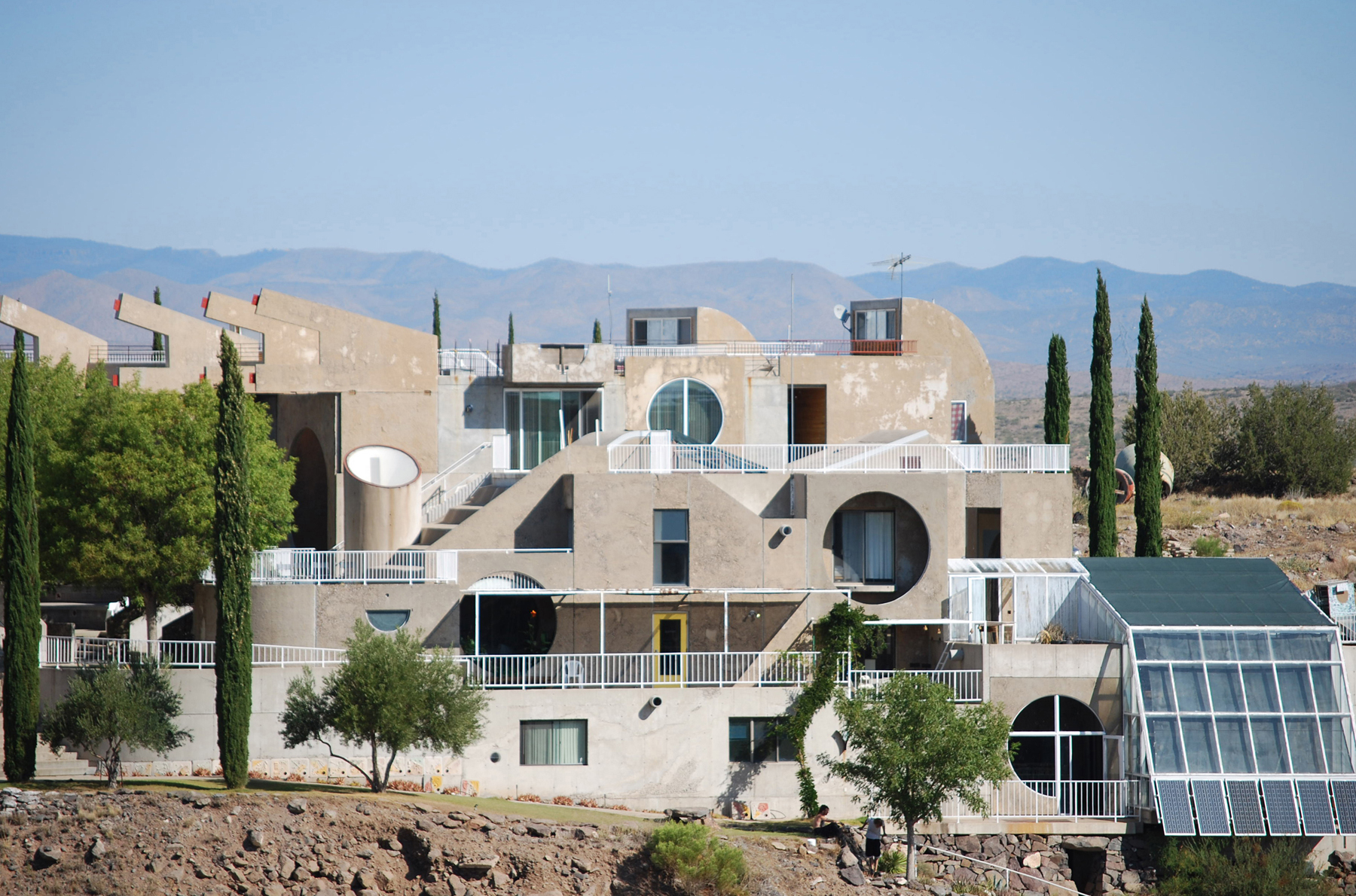 A view of the Foundry Apse. (Yuki Yanagimoto)

Opinions about Soleri's character vary – some people described him as generous and self-effacing, while others said he was arrogant and close-fisted. But most accounts seem to agree that he was unwilling to compromise about his vision.

By the time Soleri died in 2013, a new building hadn't been completed at Arcosanti for almost 25 years.

A few months before the architect's death, Vice writer Jamie Lee Curtis Taete stayed overnight at an Arcosanti apartment. Taete described the environment as "creepy" and reported that he found curtain-less windows, doors without locks, and a note written on his mirror: "I'm waiting for the lizards to reveal themselves, and tell us they created hell … 'it's not here and now but it will be, unless you bow down to ME!'"

But Taete also described a harmonious group of hard-working residents, much like the ones that first settled there in the 1970s.

Most of Arcosanti's 80 residents – they call themselves "Arconauts" – earn minimum wage working for the Cosanti Foundation, which keeps the city running. Residents are required to put in 40 weekly hours of on-site work in areas like grounds maintenance, construction, or administration.

Some handle the archive, where they restore and catalogue Soleri's old drawings and models, while others work in the town's cafe or gallery.

Still others work for Cosanti Originals Inc., which operates the site's foundry. Much of the city's current funding comes from the sale of bronze bells produced on-site.

In exchange for a weekly US$75 fee, residents are awarded a food discount and unlimited access to housing, utilities, and facilities like a swimming pool and music library.

Residents also have the option to participate in weekly philosophical discussions, parties, and workshops, and it's common to find local pets running around.

"The rule is we can have 12 cats and eight dogs," Tim Bell, Arcosanti's director of community engagement, told Business Insider. 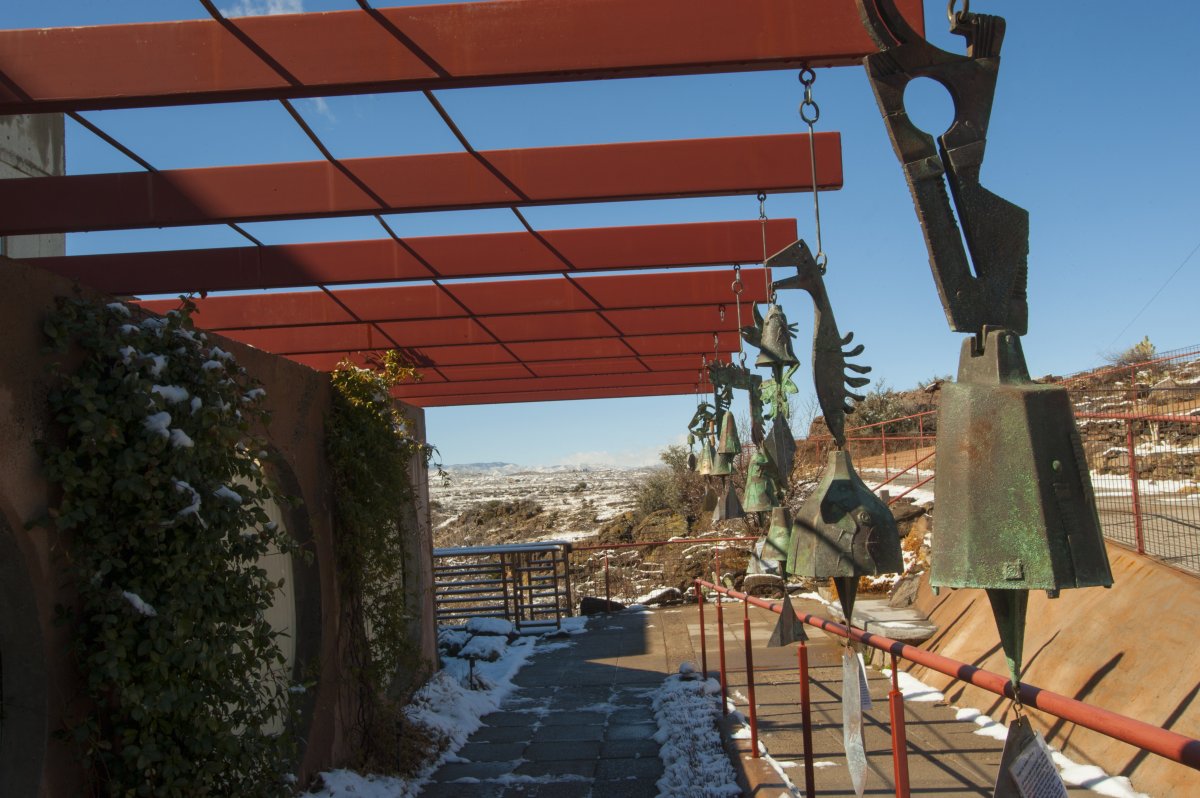 The life of an Arconaut hasn't changed much in 50 years

Bell, whose work involves raising funds for the site, has a dog of his own. He has lived in Arcosanti for about a year, though the development first entered his radar in 2015, when he read about it in The New York Times.

"I was surprised I hadn't heard of it before because the town that my parents moved to in Arizona is really very close to where our site is," Bell said. He first visited Arcosanti in 2017.

"It was unlike anything I'd ever seen," he said.

Eventually, Bell pursued the formal process of becoming an Arconaut. To live at Arcosanti, one must submit a letter of intent to the community council and complete a multi-week workshop, which includes assisting with building renovations and infrastructure upgrades.

Bell met his wife at Arcosanti, and they now live with other residents in a four-bedroom apartment with two living rooms, a bathroom, kitchen, and balcony. Every unit "has upsides and downsides," he said; the longer a person has lived at Arcosanti, the more priority they get in the city's housing pool.

"It's kind of the only version of equity that we've got," Bell added.

True to Soleri's vision, some residents at Arcosanti live without heaters, relying instead on a solar greenhouse that releases hot air into their apartments through a trap door. Though cars aren't exactly off-limits, the city's compact nature encourages people to walk, thereby reducing their environmental footprint.

But Arcosanti is a far cry from a sustainable utopia. Its olive trees provide little respite from the desert heat and residents reportedly still buy food from the grocery store (though some grow their own fruit and slaughter their own chickens).

The city might never be able to support the 5,000 residents that were originally supposed to live there, but that goal that doesn't concern Arconauts much anymore.

Bell estimated that about half of Arcosanti's population is "semi-transient," meaning they're likely to stay for about six months to five years. Around 30 percent are "semi-permanent," he said, meaning they will live there for about five to 15 years. Bell deemed rest "lifers" – those who have been with the project since the beginning and will stick around indefinitely.

He said he'll likely stay at Arcosanti as long as he's useful to the project and its mission. 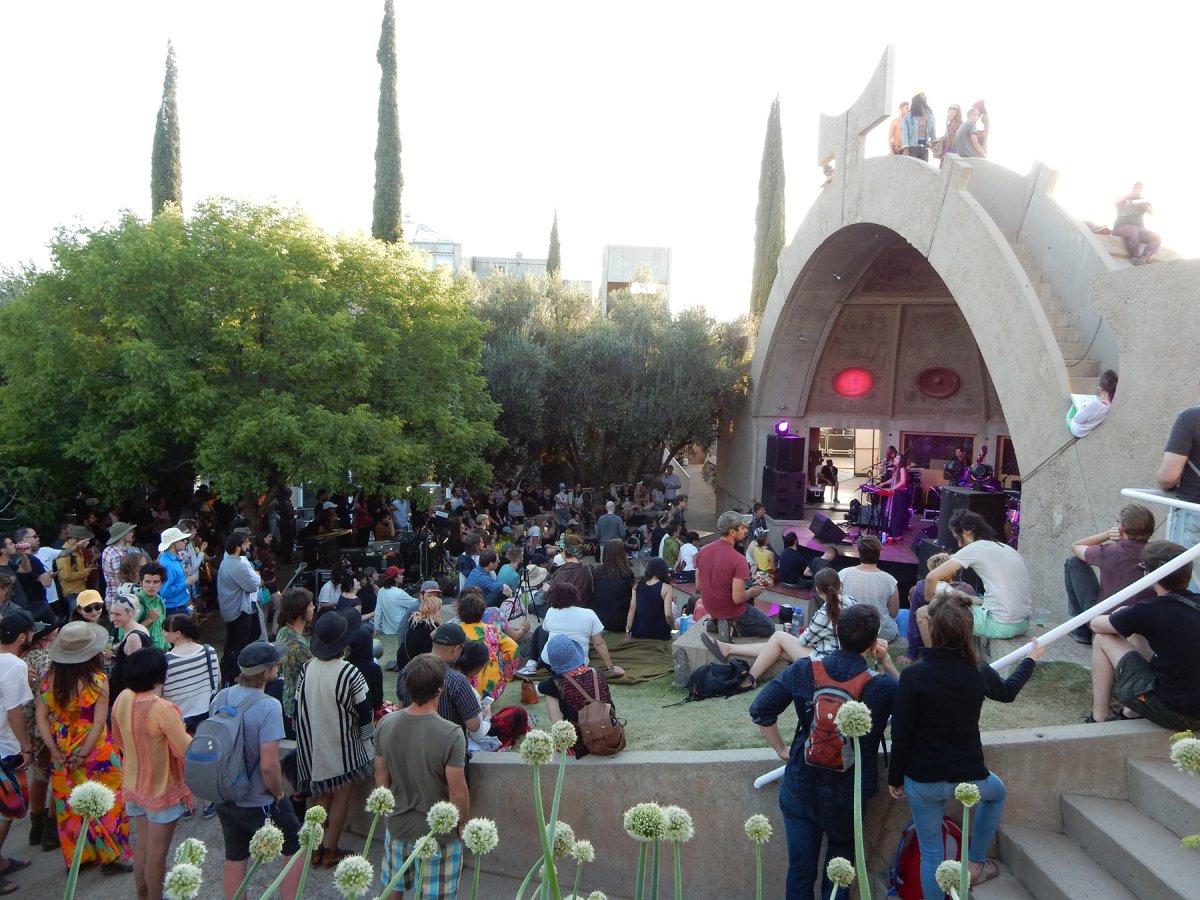 Arcosanti's annual Form music festival helps to maintain the town's notoriety. The festival, which began in 2014, bills itself as a three-day "creative retreat" that includes yoga, art installations, and a lineup of electronic and indie-rock musicians.

Like the city itself, the festival is a pared-down version of a formerly grand vision.

Shortly after the city broke ground, it began hosting themed festivals that garnered the same young, progressive crowd that lives there today.

More than 10,000 people attended the Arcosanti festival in 1987, which featured headliners like Stephen Stills of Crosby, Stills & Nash and Todd Rundgren. But that year, a grass fire in the parking lot wound up damaging around 200 cars, and a string of lawsuits from vehicle owners followed.

So today's Form festival is kept relatively small. The guest list is capped at 2,000, and many attendees submit an application explaining how they might contribute to the festival's creative and collaborative environment. The rest of the crowd consists of Arconauts or friends of performers and organisers.

In addition to that festival, Arcosanti hosts frequent guided tours and community events, including smaller concerts and art exhibits. The city also partners with local universities to provide short residencies for students interested in "arcology" – Soleri's term for dense architecture with a low impact on the environment.

Bell said the community is "refocusing" its mission on conferences and retreats, so more programs and events are likely in store.

Arcosanti in the shade. (Tomiaki Tamura)

'I don't think Arcosanti is the city of the future'

Even as the site's visionary, Soleri doesn't come up much in conversation now, Bell said.

"Most of the people who live on this site now are below the age of 30 – people who didn't even really know Soleri," he said.

In 2017, Soleri's daughter, Daniela, published an op-ed in which she described her father as sexually abusive, likening him to Hollywood figures like Harvey Weinstein and Bill Cosby.

"He was a fierce narcissist, capable only of seeing others in terms of their role in his world," she wrote.

Daniela grew up at Arcosanti and previously served on the board of her father's foundation. Arcosanti's website now features a #MeToo tab, and the page contains a statement of support for Soleri's daughter.

"Her decision to speak out about her father's behaviour towards her helps us confront Paolo Soleri's flaws, and compels us to reconsider his legacy," the statement says.

But that legacy had already begun to shift prior to the allegations, Bell said.

In the sixties and seventies, he noted, it became somewhat common for people to see innovative or alternative thinkers as gurus or messiahs (though Soleri rejected those monikers). As late as the 90s, Bell said, people settled in Arcosanti just to be close to Soleri.

Today, that dynamic has changed.

"I think something that we understand as a generation, as millennials, is that everything is collaborative," Bell said. "Nothing gets done by one single person."

He added that Arcosanti residents are well aware that no single city or development solve every problem within our society.

"Soleri gave us a map and we followed that map to the edges," Bell said. "I don't think Arcosanti is the city of the future. … There are a lot of places doing really innovative work."

This article was originally published in June 2019.

More from Business Insider:
Trending News
There's a 'Lost City' Deep in The Ocean, And It's Unlike Anything We've Ever Seen Nature2 days ago
This Island Appeared Out of Nowhere, With Life Forms Never Seen Before Nature2 days ago
Mysterious 'Zone of Uncertainty' Inside The Brain Reveals a Surprise Humans3 days ago