NASA's OSIRIS-REx spacecraft arrived at asteroid Bennu in December 2018, and just one week later, it discovered something unusual about Bennu: the asteroid was ejecting particles into space.

The spacecraft's navigation camera first spotted the particles, but scientists initially thought they were just stars in the background. After closer scrutiny, the OSIRIS-REx team realized they were particles of rock, and were concerned that they might pose a hazard.

Asteroids that are losing mass are called "active asteroids" and sometimes "main-belt comets." They sometimes leave transient trails of dust and debris that looks like a comet's tail.

When these types of asteroids were first observed, astronomers thought that the trail was made of melting ice, like a comet's tail. But now we know that there are several mechanisms that can cause an asteroid to be active.

Astronomers haven't found many active asteroids, and most of them are losing so much material that it's visible in telescopes. Most asteroids are stable, and in fact, Bennu appeared to be an inactive asteroid in Earth-based observations.

Naturally, scientists working with OSIRIS-REx wanted to know more, and stumbling on one with the spacecraft presented an unplanned opportunity to study one of these asteroids up close.

"Among Bennu's many surprises, the particle ejections sparked our curiosity, and we've spent the last several months investigating this mystery," said Dante Lauretta, OSIRIS-REx principal investigator at the University of Arizona, Tucson.

"This is a great opportunity to expand our knowledge of how asteroids behave," he said in a press release.

There are a variety of causes for active asteroids like Bennu. Sublimating ice, impacts, rotational instability, thermal fractures, and electrostatic repulsion are some of them.

In a paper published in Science on December 6, Lauretta and other scientists presented the results of their observations of Bennu's mass loss. The paper is titled "Episodes of particle ejection from the surface of the active asteroid (101955) Bennu."

The title of the paper makes it clear that these particle ejections are episodic rather than continuous. The team focused on the three largest episodes of particle ejection on January 6, 19, and February 11.

The largest event was on January 6 when OSIRIS-REx saw about 200 particles leave Bennu. Overall, the particles travelled at about 3 meters (6 feet) per second and ranged in size from less than one inch up to 4 inches (10 cm).

Each of the three occurred at different locations on the asteroid's surface. One occurred on the southern hemisphere and two near the equator. They all occurred at mid-day, and there appears to be nothing remarkable about the locations. 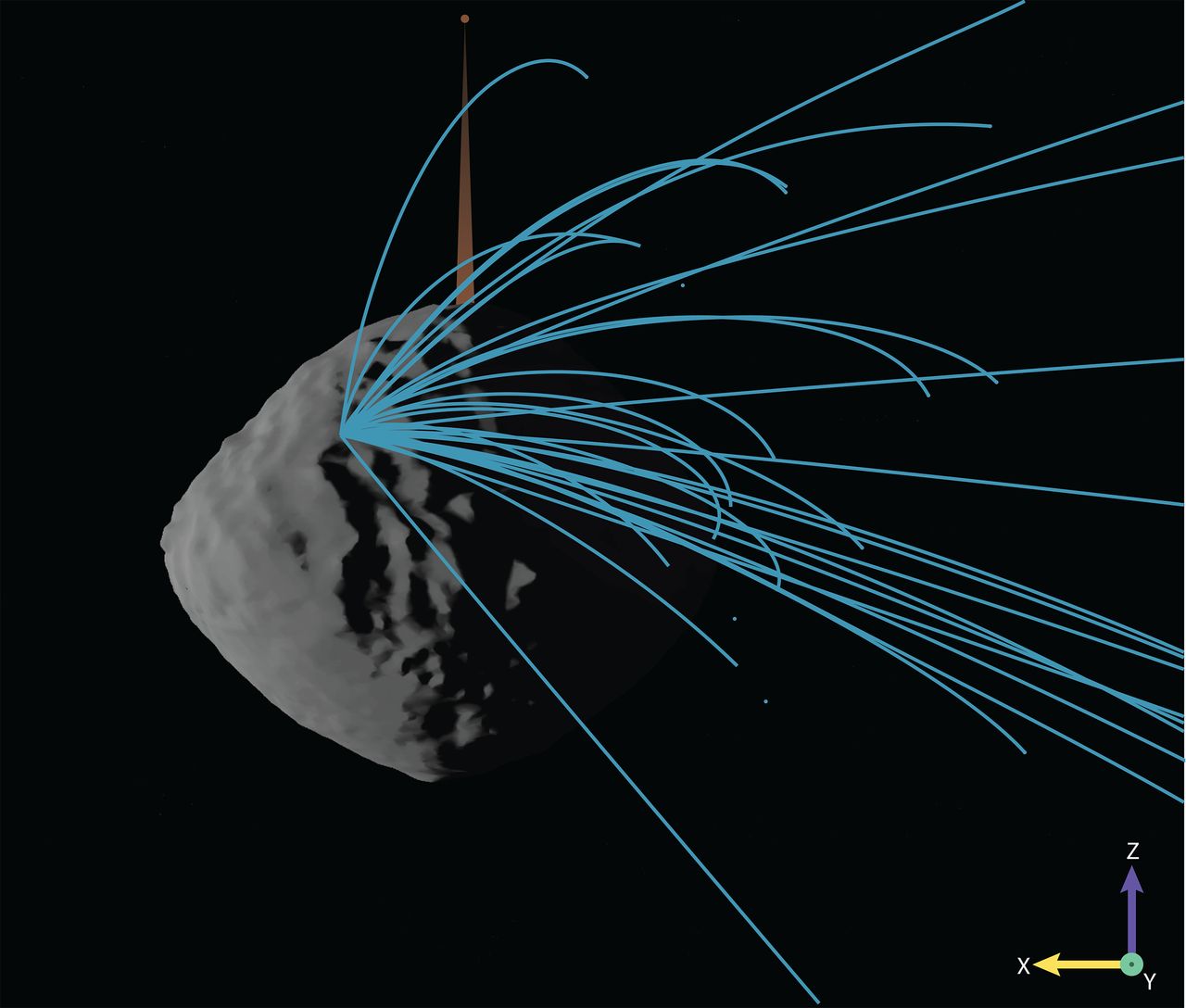 IMAGE: The blue streaks represent particles ejected from Bennu on January 19th. Where some of the streaks end is where they passed into shadow. Bennu is about 500 meters (1640 feet) in diameter. The brown dot at the top of the image represents OSIRIS-REx, and the elongated brown cone is the spacecraft's viewing angle.

After being ejected from Bennu, one of two things happened to the particles: they either orbited for a brief period of several days before falling back to the surface of the asteroid, or they were ejected into space.

After the team investigated the particle ejection they eliminated some causes and settled on three potential causes: meteoroid impacts, thermal stress fracturing, or release of water vapor.

Bennu's neighborhood is kind of a busy place, with plenty of small space rocks whizzing around. One possibility is that these rocks were striking Bennu out of sight of OSIRIS-REx and shaking particles loose, sending them into orbit or off into space.

Thermal fracturing could also explain the particles. Bennu's rotational period is 4.3 hours, and the surface temperature of the asteroid varies widely during that time.

The three major particle ejection events were all in the afternoon, when the temperature rises from cold night-time lows to day-time highs. These temperature swings could cause rock to crack and particles to be ejected.

Or it could be water release. Bennu contains significant water-bearing clays, and the day-time heating could cause it to expand, creating pressure as it tries to escape. That pressure can build in cracks and gaps in the rock, agitating the rock and busing particles loose and allowing them to escape.

Of course, the answer may not be one of these. It might be that there are multiple reasons for Bennu's active surface.

"It could be that more than one of these possible mechanisms are at play," said Steve Chesley, an author on the paper and Senior Research Scientist at NASA's Jet Propulsion Laboratory in Pasadena, Calif.

"For example, thermal fracturing could be chopping the surface material into small pieces, making it far easier for meteoroid impacts to launch pebbles into space."

What this means for other asteroids is not yet certain. Bennu contains water, but not all asteroids do. So if water release is causing it, then scientists can't draw any conclusions about "dry" asteroids.

But if the particle release is caused by meteoroid impacts and/or thermal fracturing, then it's possible that this small-scale particle loss is happening on all small asteroids. Asteroid Bennu from 5 km (3 miles) away. (NASA/Goddard/University of Arizona)

In the Summer of 2020, OSIRIS-REx will collect a sample from Bennu and return it to Earth by 2023. These particles that were ejected then returned to the asteroid are small enough to be taken during sampling, so it's possible some will return to Earth.

It'll be difficult to ascertain if any of the sample is ejected material, but not impossible. If some of it is, we may learn more about active asteroids and what causes particle ejection from the sample.

In the meantime, OSIRIS-REx will be at Bennu for a long time yet, studying it with its suite of scientific instruments. We'll still learn a lot about the asteroid before any sample is collected. Maybe there'll be more surprises.