Some of the oldest human art in Europe is entirely hidden from sight, tucked away in the narrow crawl spaces of deep, dark, and winding caves.

To even see the walls, let alone decorate them, stone age artists would have needed to crawl around with several torches, and archaeologists now suspect all that smoke induced an altered state of consciousness.

Hallucinatory plants have been connected to the otherworldly nature of cave art before, but this new hypothesis suggests ancient humans were consciously chasing a similar transformative experience in the depths of the underworld, long before they began using other psychoactive substances.

The further from fresh air they crawled, experts propose, the bigger the mental trip, and the more artistic they became.

"A few years ago, as I was visiting some decorated caves in France, I started to notice that most images are found deep in very narrow caves," archaeologist Yafit Kedar from Tel-Aviv University in Israel told The Jerusalem Post.

"I began to wonder why they chose to work this way, as opposed to paint at the entrance of wider caves, where they could have also enjoyed some natural light."

Modelling the effect of torches and lamps on a cave's airflow, Kedar and her colleagues have found the narrower the entrance to a cavern, the faster a human will be starved of oxygen.

In a deep cavern with just a single entrance, simulations show oxygen levels can drop below 18 percent in a mere fifteen minutes, possibly inducing a state of hypoxia if concentrations dip low enough.

In humans, oxygen deprivation can naturally release dopamine in the brain, sometimes resulting in drowsiness, euphoria, hallucinations or out-of-body experiences. In fact, scientists who study caves have reported experiencing similar effects even without a burning torch in hand.

The added use of fire makes such a state far more likely. 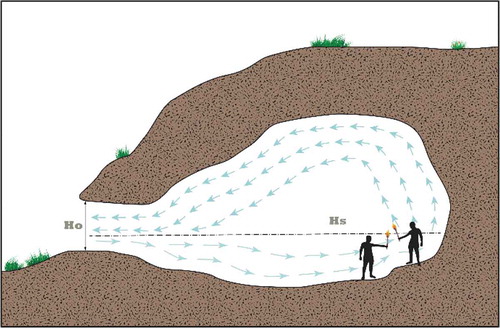 Air flow in an open cave. (Kedar et al., The Journal of Archaeology, Consciousness and Culture, 2021)

When fire burns in a narrow passage, on the other hand, both the upper and lower layers partially mix, meaning air everywhere carries significantly less oxygen than the 21 percent we usually breathe.

What's more, because oxygen atoms are lighter than carbon dioxide, they tend to float upwards, descending out of a cave's tunnels to the entrance. The deeper into a cave system someone travels with a burning flame, the more likely they are to starve themselves of oxygen.

In various simulations, when ventilation was particularly restricted, researchers found oxygen levels can fall as low as 9 percent, which is around the point where a person can lose consciousness.

This might sound like a major deterrent, and yet hundreds of ancient cave paintings from the Upper Paleolithic, between 14,000 and 40,000 years ago, are located at very similar depths. In fact, some cave art has been found as far from a cave's mouth as an artist could feasibly get.

In France's Rouffignac cave, for examples, most ancient images have been painted on the walls of extremely narrow passages, 730 meters (roughly 2,400 feet) from the only entrance. 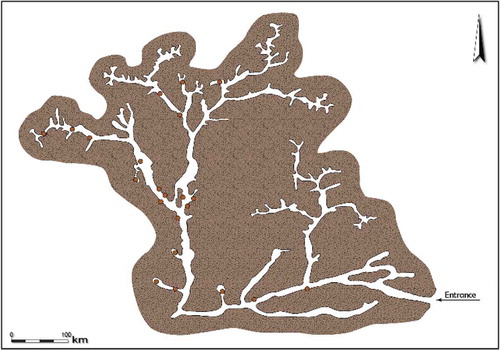 It therefore seems possible that some ancient humans were crawling deep inside Europe's dark caves to purposefully enter an altered state of consciousness. The effects of sensory deprivation, combined with the lack of oxygen, might even have been the very trigger for the surreal nature of their cave art.

"The images envisioned in such a hallucinatory state appear to float on the cave surfaces (walls, floors, and ceilings) as if these constituted a membrane connecting the upper and lower worlds," the authors explain. Kedar now hopes to test oxygen levels in actual caves to compare with the simulations.

While psychoactive plants are definitely available in Europe, evidence for their use shows up much later in the archaeological record than these cave paintings.

Hypoxia might therefore have been an easier and more natural way for early humans to knowingly alter their state of mind, making a person feel more connected to the world around them and more expressive in their work.

The Lascaux caves in France - home to some of the most famous paintings of the Upper Paleolithic - have even been found to leach natural gases, which might have induced a similar hallucinatory state in ancient humans.

"The cave environment was conceived as both a liminal space and an ontological arena, allowing early humans to maintain their connectedness with the cosmos," the authors propose.

"It was not the decoration that rendered the caves significant; rather, the significance of the chosen caves was the reason for their decoration."

The study was published in The Journal of Archaeology, Consciousness and Culture.