The languid, slow-moving sloth we know today is the inspiration behind a thousand memes, but in ancient times, giant members of their kind towered over early humans, and there was nothing funny about these great, clawed beasts.

Sadly, the last of the giant ground sloths went extinct thousands of years ago, and we might now have a clue as to why these lost animals no longer roam Earth as they once did: we stalked and hunted them into nothingness.

That's one possible interpretation of new research that uncovered something never before seen in New Mexico's White Sands National Monument.

In the dusty salt flat, scientists found traces of ancient human footprints for the very first time – but what's amazing isn't so much that they were found, but where they were found: preserved within the larger 20-inch treads of giant sloths, like fossilised nesting dolls. 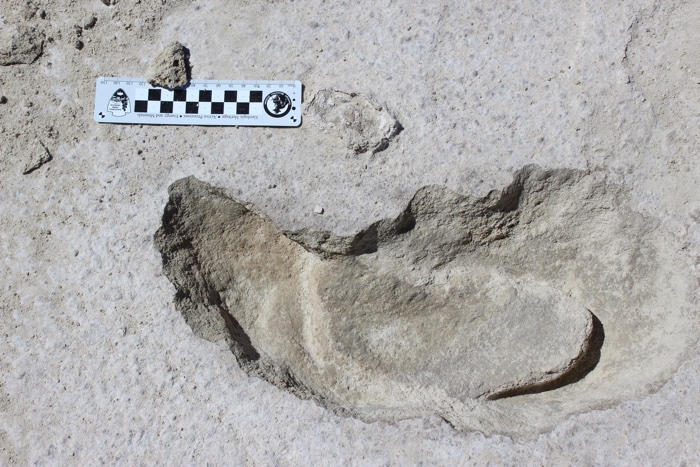 In total, greater than 10 of these prehistoric footprints-within-footprints were discovered lying in the salty sediment, suggesting how an ancient game of cat-and-giant-sloth played out some 11,000 years ago.

"The human footprints share the same long-axis orientation and occur inside the sloth track outline, indicating that the human trackmaker was walking intentionally within the sloth track," the researchers, led by geomorphologist Matthew Bennett from Bournemouth University in the UK, explain in their paper.

"These steps required the person to adjust her/his normal stride to accommodate the longer stride of the sloth."

This long-ago creeping may have resulted in an awkward-looking gait, but the ends likely justified the means, recalling advice an old Jedi once gave a young Luke Skywalker: "Sand people always ride single file to hide their numbers".

Of course, these ancient humans weren't fictional Tusken Raiders, and we can't say for sure whether they were intentionally concealing their count – but the sinister pattern of their footprints indicates they weren't just following, but were stalking these giant sloths in order to hunt them. While researchers have long hypothesised early humans would have hunted these giant creatures for food or fur, these footprints constitute the first evidence of their surface interactions in the Americas.

In addition to the footprint-within-footprints, other proximate tracks at the site reveal evidence of possible evasion and defensive behaviour by sloths when they encountered humans.

These are shown by sharp direction changes as the sloths seemingly tried to escape harassment or death, along with circular prints, where the animals may have stopped to make their last stand.

"The circular sloth trackways are consistent with defensive behaviours in which sloths reared on their hind-limbs, freeing their forelimbs for defence," the researchers write.

"We termed these structures 'flailing circles'."

Still, it's hard to be 100 percent certain of the motives of prehistoric humans shadowing sloths so many thousands of years ago. This might not have been hunting, perhaps, but a more playful kind of chase or game.

It's possible, Bennett acknowledges, but not probable.

"It's really difficult to rule that out," he told The Atlantic.

"But I think that's highly unlikely. These were fearsome animals. They had claws like Wolverine. I wouldn't have wanted to go head-to-head with one. It would be a very silly risk to take."