Ancient Human Ancestors Had The Same Dental Problems as Us, Even Without Refined Sugars And Fizzy Drinks

Dental erosion is one of the most common tooth problems in the world today. Fizzy drinks, fruit juice, wine, and other acidic food and drink are usually to blame, although perhaps surprisingly the way we clean our teeth also plays a role.

This all makes it sound like a rather modern issue. But research suggests actually humans have been suffering dental erosion for millions of years.

My colleagues and I have discovered dental lesions remarkably similar to those caused by modern erosion on two 2.5m year-old front teeth from one of our extinct ancestors.

This adds to the evidence that prehistoric humans and their predecessors suffered surprisingly similar dental problems to ourselves, despite our very different diets.

Dental erosion can affect all dental tissue and typically leaves shallow, shiny, lesions in the enamel and root surface. If you brush your teeth too vigorously you can weaken dental tissue, which over time allows acidic foods and drinks to create deep holes known as non-carious cervical lesions (NCCLs). 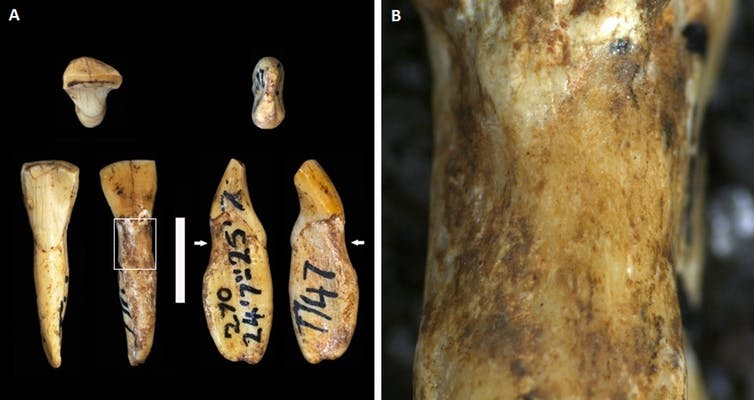 We found such lesions on the fossilised teeth from a human ancestor species Australopithecus africanus. Given the lesions' size and position, this individual would likely have had toothache or sensitivity.

So why did this prehistoric hominin have tooth problems that look indistinguishable from that caused by drinking large volumes of fizzy drinks today?

For lesions to form, they would still have needed a diet high in acidic foods. Instead of fizzy drinks, this probably came in the form of citrus fruits and acidic vegetables.

For example, tubers (potatoes and the like) are tough to eat and some can be surprisingly acidic, so they could have been a cause of the lesions.

Dental erosion is extremely rare in the fossil record, although this might be because researchers haven't thought to look for evidence of it until now. But another type of problem, carious lesions or cavities, has been found more often in fossilised teeth.

Cavities are the most common cause of toothache today and are caused by consuming starchy or sugary food and drink including grains.

They are often considered a relatively modern problem linked to the fact that the invention of farming introduced large amounts of carbohydrates, and more recently refined sugar, to our diets.

But recent research suggests this is not the case. In fact, cavities have now been found in tooth fossils from nearly every prehistoric hominin species studied.

They were probably caused by eating certain fruits and vegetation as well as honey. These lesions were often severe, as in the case of cavities found on the teeth of the newly discovered species, Homo naledi.

In fact, these cavities were so deep they probably took years to form and would almost certainly have caused serious toothache.

Another striking type of dental wear is also more common in the fossil record, and again we can guess how and why it was created by looking at the teeth of people alive today.

This process, called dental abrasion, is caused by repeatedly rubbing or holding a hard item against a tooth. It could come from biting your nails, smoking a pipe or holding a sewing needle between your teeth.

These activities usually take years to form noticeable notches and grooves, so when we find such holes in fossilised teeth they offer fascinating insights into behaviour and culture. 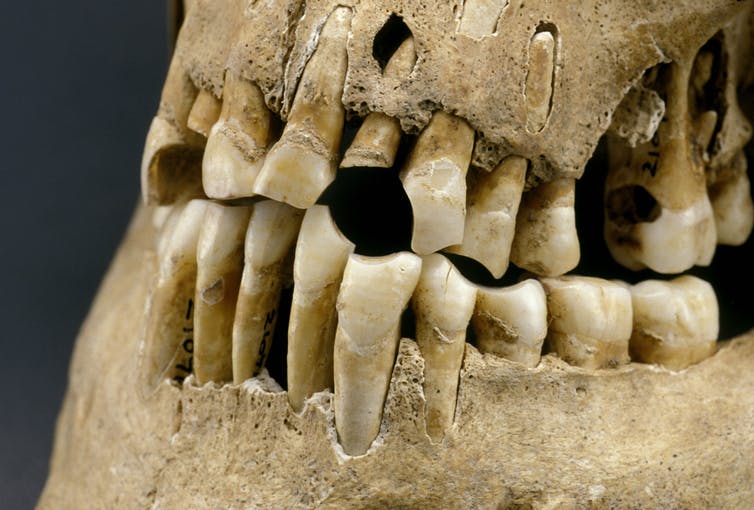 The best examples of this type of prehistoric dental wear are "toothpick grooves", thought to be caused by repeatedly placing an object in the mouth, usually in the gaps between the back teeth.

The presence of microscopic scratches around these grooves suggests they are examples of prehistoric dental hygiene, where the individual has used stick or other implements used to dislodge food.

Some of these grooves are found on the same teeth as cavities and other dental problems, suggesting they may also be evidence of people trying to relieve their toothache.

These lesions have been found in a variety of hominin species, including prehistoric humans and Neanderthals, but only in the species most closely related to us, not our older ancestors.

This might mean this tooth wear is the result of more complex behaviour from species with larger brains. But more likely it's a consequence of different diets and cultural habits.

What we do know for sure is that the complex and severe dental problems we often associate with a modern diet of processed foods and refined sugars actually existed far back into our ancestry, although less frequently.

Further research will likely show that lesions were more common than previously thought in our ancestors, and ultimately will provide more information into the diet and cultural practices of our distant fossil relatives.