We know humans have been using cannabis for various purposes for thousands of years, but its history as a drug has been a little harder to pin down. Now have a new point of reference: Around 2,500 years ago, the people of Central Asia were smoking psychoactive cannabis at funerals.

Specifically, archaeologists have found traces of cannabinol, an oxidative metabolite of tetrahydrocannabinol (or THC) in incense burners recovered from the ancient Jirzankal Cemetery on the Pamir Plateau.

Although there is evidence for the cultivation of cannabis dating back earlier - to at least 4000 BCE - its primary use seems to have been as an oil-seed and fibre crop, using plants with very low concentrations of THC.

This discovery, the archaeologists said, is the earliest clear evidence of the use of cannabis for its psychoactive properties.

Excavations on the site began in 2013, and among the artefacts removed were 10 wooden brazier fragments, containing stones with clear signs of burning.

The team suspected that these had a ritual purpose, and extracted residue from the wood and stones to see if they could determine the chemical composition of what had lain within. 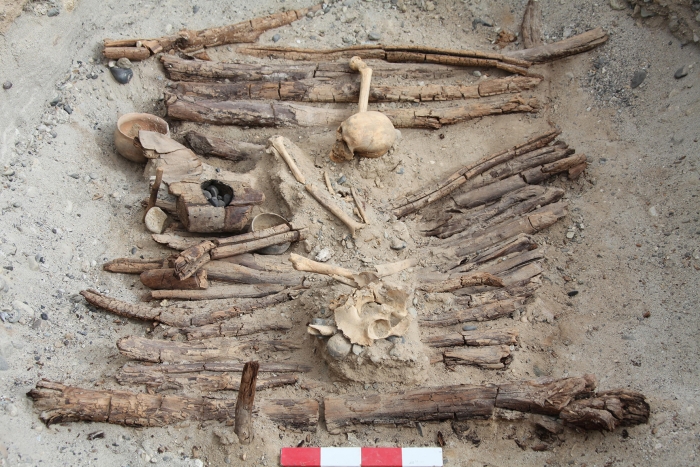 One of the braziers as it was found in a gravesite. (Xinhua Wu)

Using an identification technique called gas chromatrography-mass spectrometry, the team started to analyse organic material from one of the bowls. In the very first test, biomarkers for cannabis showed up on the internal charred layer.

In order to make absolutely sure of what they were seeing, the team then analysed ancient cannabis samples from the Jiayi Cemetery in Turpan, dating back to 790-520 BCE, to obtain a chemical reference signal.

Then they proceeded to analyse the rest of the samples.

"To our excitement, we identified the biomarkers of cannabis and local chemicals related to the psychoactive properties of a plant," archaeologist Yimin Yang of the University of Chinese Academy of Sciences said in a press conference.

"This is among the earliest chemical evidence of cannabis smoking."

Nearly all of the burnt residues from the stones and insides of bowls contained traces of cannabinol, suggesting that cannabis plants were deliberately burnt by placing scorching hot stones on top of them in the braziers.

But there was something else. The data indicated a higher concentration of THC than is usually found in wild plants.

The implication of this is that the people of Jirzankal either sought out cannabis plants with higher THC content, or they cultivated them. It's impossible to know which, but it does seem probable that it's deliberate either way. The grave from above. (Xinhua Wu)

According to the researchers, this suggests - when combined with the Turpan cannabis, which also contained THC - that the use of the plant for its psychoactive properties could have originated in Central Asia, where cannabis first evolved.

Then, it wouldn't have taken long for it to spread throughout the northern hemisphere via the exchange routes of the early Silk Road.

"I think this is a wonderful example of how closely intertwined humans are and have been with the world around them," said archaeobotanist Robert Spengler of the Max Planck Institute for the Science of Human History.

"They impose evolutionary pressures on the plants around them, and in some cases this actually leads to domestication. Humans have always sought out plants with secondary metabolites that have an effect on the human body. Premodern humans had an intimate understanding of the plants around them.

"The results of the study in many ways should not be surprising to anyone."