The Ancient Remains of 5,000-Year-Old 'Giants' Discovered in China

Archaeologists in China have made a stunning discovery, finding graves bearing the ancient remains of a 'giant' people buried approximately 5,000 year ago.

The bones, uncovered during an excavation in Shandong Province in south-east China, reveal at least one male individual who would have reached 1.9 metres (6 ft, 3 in) in height, along with others measuring 1.8 metres (5 ft, 11 in) tall – making them giants in their time who would have towered over their neolithic contemporaries.

"This is just based on the bone structure," the head of Shandong University's school of history and culture, Fang Hui, explained to China's state-run news agency, Xinhua.

"If he was a living person, his height would certainly exceed 1.9 metres." 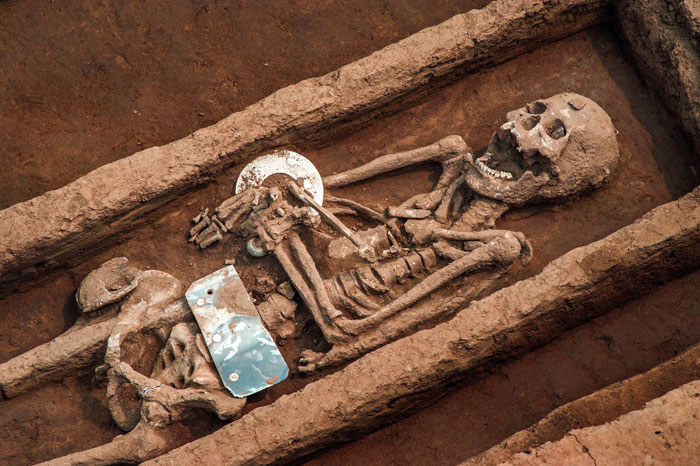 So it seems modern men of the same region are significantly shorter than many of these ancient forebears, even though men in China today would enjoy far better access to a range of healthy foods, and live in an era when we know much, much more about nutrition.

While we don't know for sure how tall the average height would have been in Shandong 5,000 years ago, European males in the period are thought to have only stood 1.65 metres (5 ft, 5 in), so it's clear these 'giants' were definitely unusually tall for their time.

Fang's team has been conducting the dig in Jiaojia village in Zhangqiu District, Jinan City, since last year, and have so far excavated the ruins of 205 graves and 20 sacrificial pits, alongside 104 houses.

As to what gave these ancient individuals such impressive stature, the researchers think the people of what's called Longshan culture – named after Mount Longshan in Zhangqiu – had good food to thank for their healthy frames.

"Already agricultural at that time, people had diverse and rich food resources and thus their physique changed," Fang told Xinhua.

Another clue to the giants' proportions lies in their ancient surroundings. The tallest of the men were found in larger tombs, suggesting they may have been important individuals of high status, giving them better access to good food and a comfortable existence.

The layout of the ruins of houses found in the dig also indicates things like separate bedrooms and kitchens – decidedly comfortable conveniences for a village dating back around five millennia, and lending weight to the hypothesis that those living in Jiaojia didn't have too much to complain about.

In addition to the human remains and building foundations, archaeologists uncovered pig bones and teeth – suggesting the villagers farmed the animals – along with a range of colourful pottery and jade objects.

Some of the skeletons and cultural artefacts bear the marks of physical damage, which may have been intentionally inflicted after the burials, which the team thinks could have been politically motivated in some kind of local power struggle. 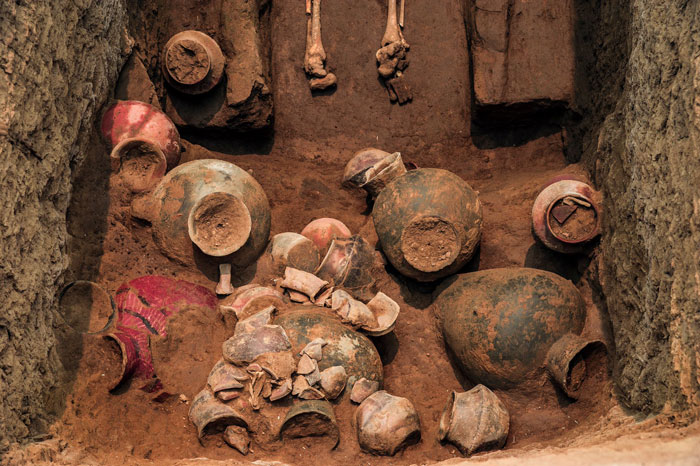 It's worth bearing in mind that these early findings are only preliminary for now and haven't yet been peer-reviewed by other scientists, but what's perhaps most exciting about the find is just how much left there is to discover about these ancient peoples and their way of life.

So far, just 2,000 square metres of the Jiaojia site have been excavated – only a minute fraction of the overall square kilometre intended to be dug up and investigated.

Nobody knows what exact secrets Jiaojia will continue to turn up, but there's a good chance we'll find out more to explain how these ancient giants grew so impressively tall – and more besides.