Archaeologists Just Uncovered One of The Biggest Viking Axes Ever

Archaeologists in Denmark have recently uncovered one of the biggest Viking Age axes ever found, buried inside the tomb of an ancient 'power couple'.

Though large, the axe has barely any decorative markings on it, suggesting it once belonged to an extremely strong warrior who actually used the two-handed weapon in combat before his demise.

"It's a bit extraordinary - it's much bigger and heavier than the other axes. It would have had a very long handle, and it took both hands to use it," lead archaeologist Kirsten Nellemann Nielsen, from the Silkeborg Museum in Denmark, told Tom Metcalfe from Live Science.

Strangely, Nielsen doesn't disclose exactly how big or heavy the axe is. But he does explain that the remains were originally discovered back in 2012 inside a 'death house' – a type of Viking tomb that measured roughly 3.9 metres (13 feet) by 12.8 metres (42 feet) and contained three separate graves – that was uncovered during a construction project in Denmark's southwestern region known as Hårup.

Inside the main tomb of the death house, the team found the remains of a man and woman that are thought to have been a 'power couple', who were either of high birth or had substantial influence in their communities, though they aren't sure the two were actually married.

The researchers suspect this from markings and offerings left with the couple – especially silver threads in the woman's clothing, and the fact that she was buried with a key, a symbol of status in the Viking Age.

"The special thing about this tomb is that these two people, each in their own grave, are put inside the same structure," Nielsen told Live Science. "I can't say it isn't a brother and sister, or it could be [a] husband and wife relationship. But definitely, these two were the ones in charge, the noblest people of the local area." 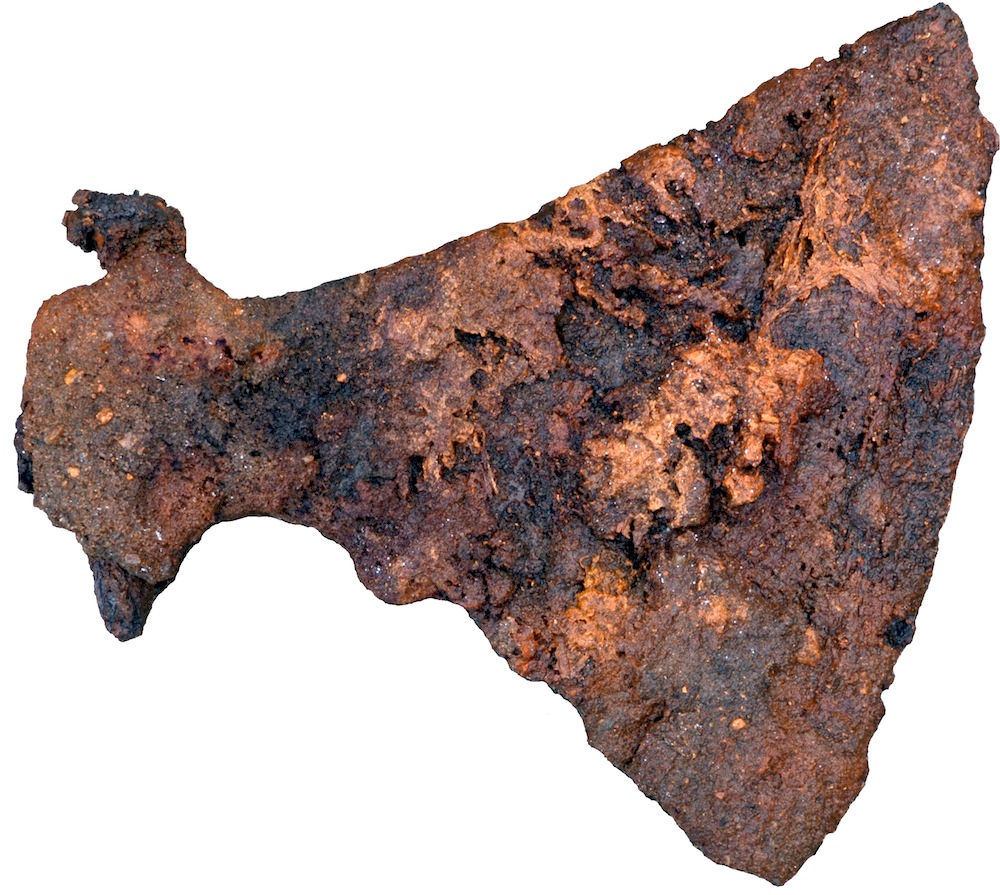 The man in the main tomb was also buried with the gigantic axe – one of the biggest ever found – that was likely used for combat, though it took two hands to wield and was probably pretty difficult to swing. Because of that fact, the axe was likely used to strike fear in the hearts of the man's enemies. After all, who wouldn't be intimidated by a lumbering Viking with an axe that looks more like a movie prop than an actual weapon?

"People across Europe feared this type of axe, which at the time was known as the Dane Axe - something like the 'machine gun' of the Viking Age," Nielsen told Mikkel Andreas Beck from Science Nordic.

The other grave inside the death house – which was originally constructed around 950 AD to house the remains of the 'power couple' - contains the remains of another Viking warrior who was also buried with his axe, which was smaller than the one found in the main chamber.

While the new findings are cool because of the axe alone, Nielsen and other archaeologists exploring Viking culture rely on graves like this because no Viking settlements or houses have ever been found, meaning that graves are the only chance researchers currently have if they want to learn about them.

That all might change soon, though, because – back in April – a researcher from the University of Alabama managed to find signs of a North American Viking settlement using satellite imagery. Right now, if nothing has changed since their announcement earlier this year, the team is planning on starting excavation of the site soon, which will hopefully turn up never-before-seen Viking artefacts.

The recent findings haven't been peer-reviewed yet, but they have been published in full on Academia.edu for others in the field to read and offer feedback (disclaimer: it's in Danish).