In 2005 astronomers found a dense grouping of stars in the Virgo constellation. It looked like a star cluster, except further surveys showed that some of the stars are moving towards us, and some are moving away. That finding was unexpected and suggested the stream was no simple star cluster.

A 2019 study showed that the grouping of stars is no star cluster at all; instead, it's the hollowed-out shell of a dwarf spheroidal galaxy that merged with the Milky Way. It's called the Virgo Overdensity (VOD) or the Virgo Stellar Stream.

A new study involving some of the same researchers shows how and when the merger occurred and identifies other shells from the same merger.

The new paper's title is 'The Milky Way's Shell Structure Reveals the Time of a Radial Collision'. The first author is Thomas Donlon II, a Rensselaer grad student, who was also the first author of the 2019 study. The paper is published in The Astrophysical Journal.

In their paper, the authors write "In this work, we identify shell substructure in the Milky Way for the first time, and we argue that these shells are indeed associated with the VRM and therefore a radial merger event."

There are different types of mergers, and according to the 2019 paper, the merger that created the VOD was what's known as a radial merger. These are violent merger types that a press release describes as a "stellar version of a T-bone crash".

"When we put it together, it was an 'aha' moment," said Heidi Jo Newberg, Rensselaer professor of physics, applied physics, and astronomy, and lead author of The Astrophysical Journal 2019 paper detailing the discovery.

"This group of stars had a whole bunch of different velocities, which was very strange. But now that we see their motion as a whole, we understand why the velocities are different, and why they are moving the way that they are."

The new paper builds on that work and reveals even more detail. As the dwarf galaxy collided with the Milky Way, it left behind curved planes of stars that kind of bounce through the galactic center. They've called the event the Virgo Radial Merger (VRM).

Each time the dwarf galaxy collides with the galactic center, it barrels out the other side, only to be drawn back toward the center. Each time it reaches the furthest point, it leaves behind some of its stars, forming the shells.

The team created simulations using the observational data and calculated how many times the dwarf galaxy has bounced back and forth and when it first merged with the Milky Way.

The team of researchers used data from multiple sources. Using data from the Sloan Digital Sky Survey, the ESA's Gaia mission, and the LAMOST telescope in China, they found two shell structures in the VOD and two more in the Hercules Aquila Cloud region.

Their computer modeling showed that the merger began when the dwarf galaxy first passed through the Milky Way's center 2.7 billion years ago. 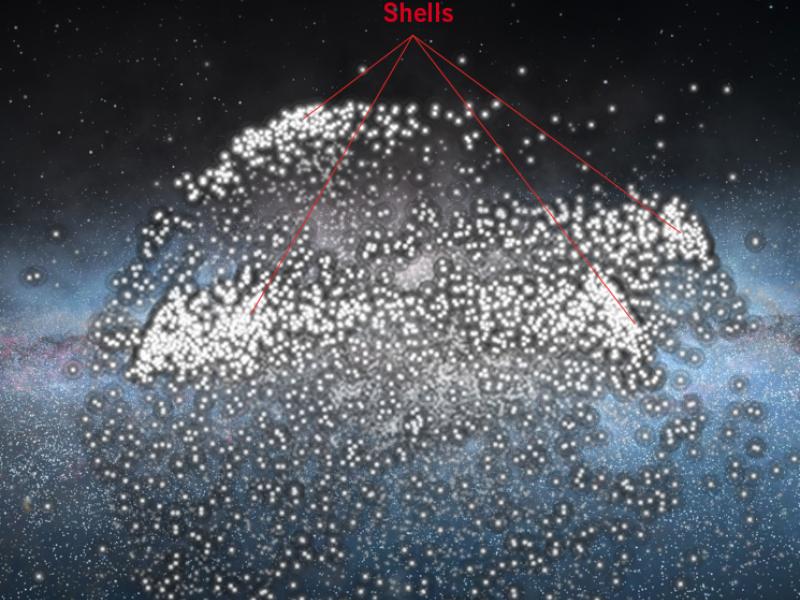 Galaxy mergers are not rare. Huge galaxies like the Milky Way grew large by merging with much smaller galaxies. Currently, the Milky Way is in the middle of two mergers. It's in the process of merging with the Sagittarius Dwarf Spheroidal Galaxy and with both the Small and Large Magellanic Clouds.

All these mergers have left their mark on the Milky Way. Our galaxy's halo is a region of stars in a spherical shape surrounding the Milky Way's spiral arms.

The majority of those stars are not "native" to the galaxy, but instead are "immigrants" from other galaxies that merged with the Milky Way.

Over time, the tidal forces of the galaxy shape those immigrants into long streams of stars. Those streams move in concert with each other through the halo. Astronomers call these tidal mergers, and they're the focus of much research.

But this merger was different. Radial mergers like this one are much more violent, and the dwarf galaxy can whipsaw back and forth multiple times, leaving these shell shapes.

In a press release, first author Thomas Donlon II explained that the team was not actively looking for evidence of one of these radial mergers.

"There are other galaxies, typically more spherical galaxies, that have a very pronounced shell structure, so you know that these things happen, but we've looked in the Milky Way and hadn't seen really obvious gigantic shells," said Donlon, who was also the lead author on the 2019 paper that first proposed the Virgo Radial Merger.

As the team worked on their study, the whip-saw motion of the stars in the VOD became clearer in their modeling. That's when they had to consider a radial merger as the cause.

"And then we realized that it's the same type of merger that causes these big shells," said Donlon II.

"It just looks different because, for one thing, we're inside the Milky Way, so we have a different perspective, and also this is a disk galaxy, and we don't have as many examples of shell structures in disk galaxies."

That merger happened between 8 and 10 billion years ago and added eight globular clusters and about 50 billion solar masses of stars, gas, and dark matter to the Milky Way. It has the characteristic shape of a sausage due to the orbits of the stars.

Prior to this work, astronomers tended to think that the Virgo Radial Merger and the Gaia Sausage were outcomes of the same event. But now there's a much younger estimate for the VRM, and the two are understood to be separate events.

This work is potentially shedding some new light on other parts of the Milky Way, too. The Gaia Snail is a spiral-shaped group of stars near the Sun that may be connected with the VRM, and another event called the Splash might be, too.

The Splash is a substructure in the Milky Way's disk near the Sun. It has a large population of metal-rich stars moving through highly radial orbits in the inner halo. There are many questions around the origin of the Splash, but this study shows that the VRM could have caused it, and other more ancient mergers aren't needed to explain it.

"There are lots of potential tie-ins to this finding," Newberg said.

"The Virgo Radial Merger opens the door to a greater understanding of other phenomena that we see and don't fully understand, and that could very well have been affected by something having fallen right through the middle of the galaxy less than 3 billion years ago."

Trending News
Scientists Achieved Self-Sustaining Nuclear Fusion… But Now They Can't Replicate It Physics 2 days ago
Hidden 'Hunger Stones' Reveal Drought Warnings From The Past Environment 2 days ago
A Nuclear War Could Starve Billions, But One Country May Be Safer Than The Rest Environment 3 days ago