Astronomers Mapped The Spectacular Accelerating Outflows of a Stellar Explosion

Material accelerating away from the site of a stellar explosion has been discovered in a star-forming cloud.

It's only the second time molecular outflows of this kind have ever been clearly seen, but it could help astronomers understand how the most massive stars get their start in life.

In the 1980s, astronomers discovered something peculiar in the star-forming Orion nebula: streamers of dense molecular gas, travelling at speed through space. When these streamers were mapped, they seemed to originate from a single point.

Since then, molecular outflows have been discovered in many star-forming regions. They are thought to play an important role in the formation of low-mass stars, transporting away the excess angular momentum that would otherwise cause baby stars to spin themselves into oblivion.

The Orion outflow, however, was one of a kind. Molecular outflows in low-mass stars are bipolar; that is, there are only two of them, shooting out in opposite directions. The outflows in Orion were much more numerous… and they were also found in a region where much more massive stars - over 10 times the mass of the Sun - are forming.

Now, we don't know as much about the formation of massive stars as we do about the smaller ones. Massive stellar nurseries are rarer and tend to be more distant, making them harder to see. So astronomers thought that maybe the Orion outflows could yield some clues.

Yet there was nothing at the source of the outflows - no baby massive star. This could imply several explosive scenarios, such as a merger between two massive baby stars, or gravitational energy liberated by the formation of a nearby massive binary. But with only one observation of its kind, it's difficult to make a firm ruling.

To try and learn more about this phenomenon, a team of astronomers led by Luis Zapata of the National Autonomous University of Mexico decided to turn one of our most powerful radio telescopes, the Atacama Large Millimeter/submillimeter Array (ALMA), at a known massive stellar nursery. 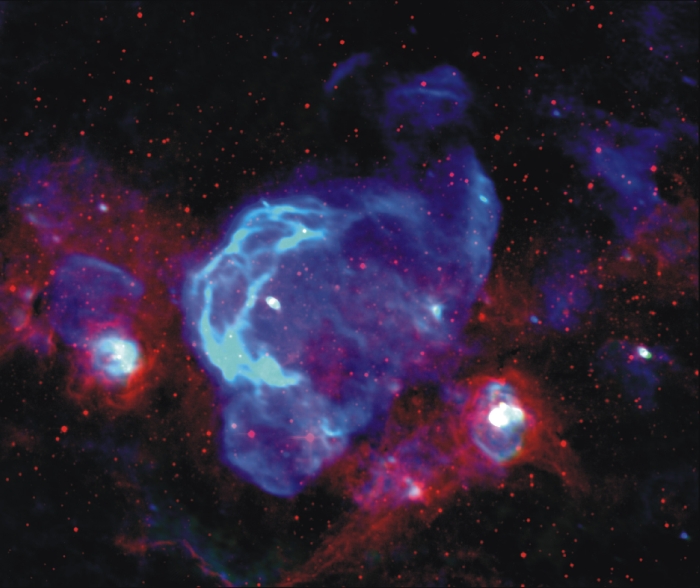 G5.89−0.39, also known as W28 A2, is around 9,752 light-years away. It contains a bright, expanding shell-like ultra-compact hydrogen cloud and powerful molecular outflows. Zapata and his team had previously noted that six of these filaments seemed to point directly at the centre of the hydrogen cloud, but their results were inconclusive.

ALMA cleared that ambiguity right up. It detected dense streamers based on the millimetre-wavelength emission from carbon dioxide and silicon monoxide.

The astronomers were able to identify 34 molecular streamers zooming radially away from the heart of the cloud, accelerating outwards. Based on their velocities of up to 130 kilometres (80 miles) per second, the outflows are about 1,000 years old; whatever explosion produced them occurred about a millennium ago.

They are not as powerful as the outflows you'd expect from a supernova explosion, which occurs when a massive star dies. In addition, as was also seen in the case of Orion, there was no star in the centre - just a region of ionised gas, possibly the result of heating during an explosive event.

If there was a star (or multiple stars) associated with the event that produced the outflows, it could have been ejected from the region.

Because massive stars always form in clusters, such interactions are possibly quite common, which in turn could shed some light on massive star formation. If two protostars merged, they would likely have ended up as one much larger star.

Based on the Orion outflows, the G5.89 outflows, and the marginal detection of what could be similar outflows in a star-forming region known as DR-21, the team estimates that these events occur every 130 years or so. That's very close to an estimated rate of supernova explosions.

The unpredictability of these events, and the short duration of the outflow phase, may make them pretty hard to find; but, now that we know what to look for and how, astronomers may be able to build a catalogue of these kinds of events. In turn, that will help us understand why they occur.

"If enough of these outflows can be detected in the future, the merging of clusters of stars may be an important formation mechanism of massive stars," Zapata said.