Astronomers Just Discovered a Huge Galaxy Orbiting Our Own

A huge galaxy orbiting our own Milky Way has seemingly appeared out of nowhere. The newly spotted dwarf galaxy, which has been named Crater 2, sits around 400,000 light-years away, and has already earned the title of the fourth largest known galaxy circling our own.

So how does a galaxy that big stay hidden for so long? Crater 2 has always been there, quietly circling our own giant galaxy. But its stars are so diffuse that it's incredibly dark, and it's been masked up until now by its brighter neighbours. In fact, it's one of the dimmest galleries ever detected in the Universe.

"This is indeed a very rare discovery," lead researcher Vasily Belokurov from the University of Cambridge in the UK told The Huffington Post. "A galaxy like Crater 2 is a sort of invisible object."

As far as we know, the Milky Way is orbited by 49 other galaxies, but this research suggests that perhaps there are other dark galaxies, inside our own cosmic neighbourhood, that have remained hidden because of their diffuse, ghostly appearance.

Crater 2 was first detected in January, when astronomers used a computer algorithm to study images taken by the Very Large Telescope in Chile, and then pinpoint regions where there might be unusual clustering of stars - one of those clusters turned out to be Crater 2.

Because galaxies don't tend to have defined edges, astronomers often describe them in terms of their 'half-light diameter', which basically means the diameter of the part of the galaxy that emits half its light.

Based on the analysis so far, the astronomers calculate that Crater 2 has a half-light diameter of around 7,000 light-years, which means if we could see it in the night sky, it would look twice as big as the full moon - but also a whole lot more diffuse, because of how far apart its stars are.

The illustration below shows what Crater 2 would look like if it was 1,000 times more luminous than it really is, with the Moon for scale: 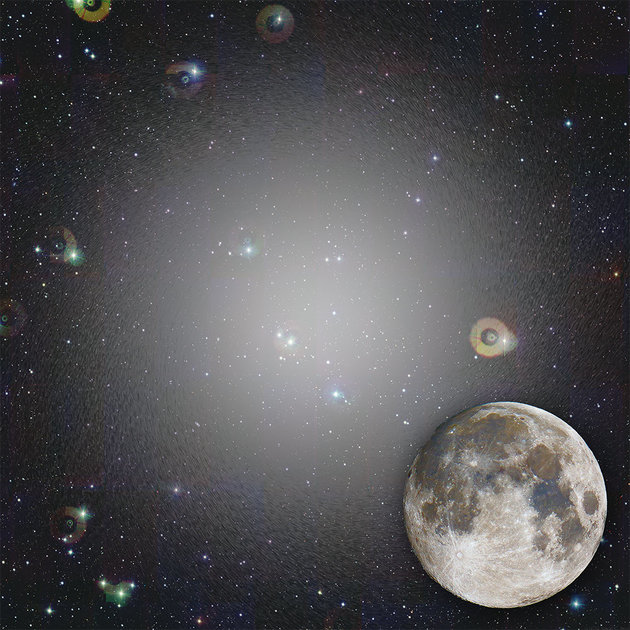 "It is orders of magnitude less luminous compared to most objects of similar size," said Belokurov. "It is extremely diffuse. We believe it was born that fluffy. But why, we do not yet know."

In the last 10 years alone, the number of known satellite galaxies has doubled, which suggests we still have a lot to learn about the galaxies orbiting our own.

In fact, there's evidence that Crater 2 itself might belong to a small group of galaxies that are falling into the Milky Way.

"It seems to be aligned with a handful of other astronomically nearby objects, which may be teaching us how our group of galaxies formed," Jay Pasachoff, an astronomer at Williams College in Massachusetts who wasn't involved in the study, told The Huffington Post.

Belokurov and his team are already using the new galaxy-spotting technique to figure out what else is out there that we might have missed, with the hope of eventually better understanding the evolution of our own galaxy. One thing's clear - when it comes to space, we still have so much to discover.

The research has been published in the Monthly Noticed of the Royal Astronomical Society.