Audi Has Successfully Made Diesel Fuel From Carbon Dioxide And Water

German car manufacturer Audi has reportedly invented a carbon-neutral diesel fuel, made solely from water, carbon dioxide and renewable energy sources. And the crystal clear 'e-diesel' is already being used to power the Audi A8 owned by the country’s Federal Minister of Education and Research, Johanna Wanka.

The creation of the fuel is a huge step forward for sustainable transport, but the fact that it’s being backed by an automotive giant is even more exciting. Audi has now set up a pilot plant in Dresden, Germany, operated by clean tech company Sunfire, which will pump out 160 litres of the synthetic diesel every day in the coming months.

Their base product, which they’re calling 'blue crude' is created using a three-step process. The first step involves harvesting renewable energy from sources such as wind, solar and hydropower. They then use this energy to split water into oxygen and pure hydrogen, using a process known as reversible electrolysis.

This hydrogen is then mixed with carbon monoxide (CO), which is created from carbon dioxide (CO2) that’s been harvested from the atmosphere. The two react at high temperatures and under pressure, resulting in the production of the long-chain hydrocarbon compounds that make up the blue crude.

Once it's been refined, the resulting e-diesel can be mixed in with our current diesel fuel, or used on its own to power cars in a more sustainable way. 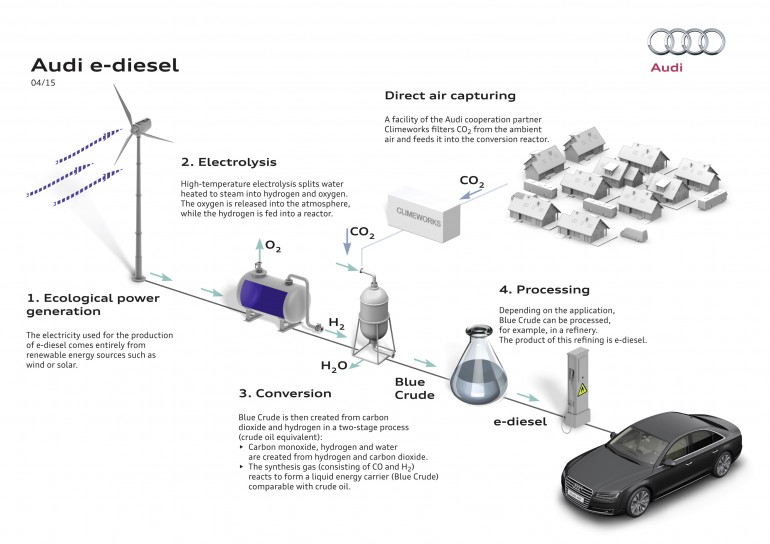 Sunfire analyses have shown that the synthetic fuel is not only more environmentally friendly, but also has superior combustion when compared to fossil fuels. The overall energy efficiency of the e-diesel is 70 percent, they report.

Of course, with the initial factory only pumping out around 160 litres each day, the fuel isn’t going to have a huge impact on the market just yet. But Audi and Sunfire now want to build a bigger factory, and anticipate that once production is scaled up, the e-diesel will sell to the public for between 1 and 1.50 Euros per litre, dependent on the cost of renewable electricity.

With traditional diesel currently on the market for upwards of 1.50 Euros per litre in Germany, this would make the fuel extremely competitive, and perfectly positioned to made sustainable travel accessible to everyone. "If we get the first sales order, we will be ready to commercialise our technology", said von Olshausen.

Just imagine being able to tear around the countryside in an Audi sportscar, and not having to feel guilty for all the CO2 emissions you're producing. We can't wait.

Find out more about how the fuel is made in the Sunfire video below: