In spite of what most Australians would have you believe, the land Down Under isn't a hot-bed of venomous arachnids. But every now and then, a spider emerges that gives even the most stoic of us a dose of arachnophobia.

Take this stunning example of a female funnel-web spider (Atrax robustus) for example, recently handed in to the Australian Reptile Park in New South Wales.

With a leg-span doubling that of many other members of its species, and fangs long and powerful enough to punch through a fingernail, it's the largest of its kind the park experts have seen.

So what else do you call it, other than Megaspider?

The plan is to milk her venom in order to produce more much-needed anti-venom.

"She is unusually large and if we can get the public to hand in more spiders like her, it will only result in more lives being saved due to the huge amount of venom they can produce," says the zoo's education officer, Michael Tate.

Funnel-web venom is no joke, containing some seriously potent neurotoxins that block sodium channels in our nerves. In the worst cases, the effects of a large enough dose can be fatal; roughly a dozen deaths have been recorded in recent history.

Strangely, the venom doesn't seem to bother other mammals. Cats and dogs, for example, aren't adversely affected by female bites, with usually a mild response from the male.

Just why funnel-web venom evolved to cause humans harm isn't clear, though research backs up suggestions it's an accidental side effect of an insect-killing cocktail that also happens to conveniently keep predators at bay with a painful nip. This is especially handy when the males go on the hunt out in the open for mates.

Sometimes it doesn't even take a randy mood to drive the spiders out in the open. Given enough rain – of the kind Australia's east coast has been experiencing recently – they'll come out of their damp burrows in droves.

Even still, bites are surprisingly rare, adding up to maybe 30 to 40 a year. In those events, having enough anti-venom at hand is important. Funnel-web anti-venom is created using the spider's venom itself, which is why researchers are so keen to milk them.

There could also be some useful chemicals lurking in that soup of bioactive molecules for researchers. Medical scientists are keen to see how proteins in the venom might help reduce damage from heart attacks or extend the life of hearts for transplants, for example.

Milking programs like those at the Australian Reptile Park play a vital role in supplying medical and research facilities with a fresh supply of these vital treatments, and specimens like Megaspider are as prized as a farmer's fattest cow.

"We are really keen to find out where she came from in hopes to find more massive spiders like her," says Tate.

A typical funnel-web spider's legs might reach around 4 to 5 centimeters (about 2 inches) from tip-to-tip. Last year, an individual found in Newcastle truly pushed these limits, earning it the nickname Dwayne 'The Rock' Johnson.

If The Rock was at the top of the expected range, Megaspider exceeded it, at an insane 8 centimeters (3.1 inches) – a size that rivals many tarantulas. 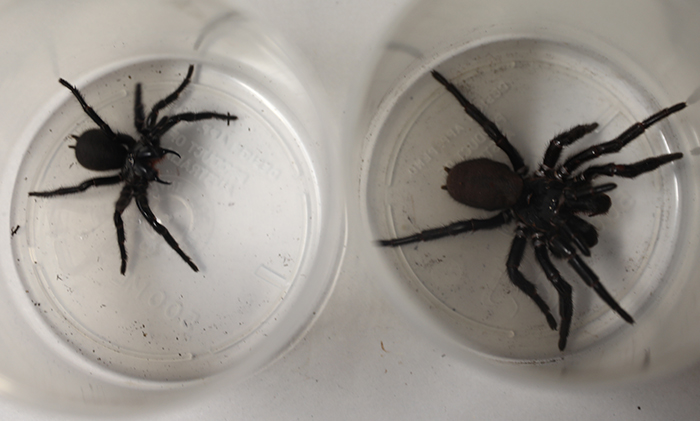 Impressive as it sounds, the park has seen heavyweights like it before. A 10-centimeter (4-inch) male, dubbed Big Boy, was donated to the park in 2016.

If there are bigger ones out there, park staff would love to meet them.

"People can bring any collected spiders to the Reptile Park itself," says Tate.

"However, if they can't get to us, we have drop off zones around Sydney, the Central Coast and Newcastle and all facilities are provided with a spider safety kit to house the spiders until the Australian Reptile Park staff can come and pick them up each week."