There's a New Baby Aye-Aye at Denver Zoo, And We Just Can't Deal With The Cute

Denver Zoo in the US has just welcomed a new resident: a teeny tiny member of one of the most elusive lemur families in the world, the aye-aye. The new arrival, born on 8 August to mum Bellatrix and dad Smeagol, has been named Tonks, a name just as adorable as she is.

The birth is a tremendously exciting event. In the US, there are just 24 of these strange animals in zoos across the whole country - and no one knows how many are in the wild, limited only to remote parts of their native Madagascar.

These weirdly adorable nocturnal primates (Daubentonia madagascariensis) are sadly endangered, losing an estimated 50 percent of their population over the last few decades due to habitat loss and hunting.

Even for researchers, actually seeing aye-ayes in the wild is very rare. Their presence is inferred from marks on trees left behind by their foraging methods. They are what is known as percussive foragers. They drum on wood to find cavities, listening for the small telltale noises of grubs scurrying around inside. Then they use their sharp incisors to gnaw the wood open and reach in with their long, thin middle finger to secure their juicy prey.

Tonks - named for the Harry Potter character Nymphadora Tonks (mum was named for Harry Potter's Bellatrix Lestrange, dad for The Lord of the Rings' Smeagol, AKA Gollum) - is over a month old now, and thriving with her mum after a slightly shaky start.

Just look at the little derpling: "We noticed that Bellatrix wasn't showing typical mothering behaviours, so we decided to step in to give Tonks some supportive care," said the zoo's Lead Primate Keeper Becky Sturges.

"We provided 24-hour care for the first week and had to teach Bellatrix how to nurse, but now she is nursing well and Tonks has gained a lot of weight. Now we're just monitoring them to make sure things continue to go well."

Aye-ayes live up to around 20 years in captivity, spending the first two or three nesting with mum before making their own way into the world. They are non-monogamous, and only have one baby at a time - there will be no new babies while there is still one in the nest. 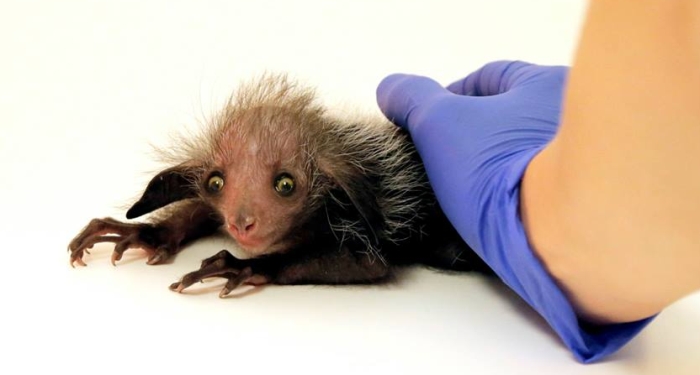 Tonks is still tiny - she may nurse for another six months. And if you look at the pictures, you'll see that her little ears are still floppy. They'll become more rigid very soon, by about six weeks of age.

She's also not going to be able to be seen at the zoo quite yet. She'll be spending most of her time sleeping in the nest for at least another month or two, the zoo said.

Luckily, they've provided all these photos so we can still join in the adoration. And if you want more Tonks news, you can follow on the Denver Zoo Facebook page, where new pics will be posted as they arrive.