It's So Hot in Australia, Hundreds of Dying Bats Are Falling From Trees

(Help Save the Wildlife and Bushlands in Campbelltown/Facebook)

It has been a weird few weeks of weather. In North America, Canadians and Floridians alike shivered through freezing temperatures, bomb cyclones and a polar vortex. (It got so cold that iguanas froze and fell out of trees.) Meanwhile, over in Australia, where it is summer now, it has been especially hot. Sweltering, really.

In Sydney, temperatures hit 47.2 degrees Celsius (117 degrees Fahrenheit) on Sunday, the hottest it has been since 1939.

That oppressive heat, a side effect of climate change, has made life hard for the country's humans and infrastructure. Heat waves result in 10 percent more calls for ambulances and 10 percent more deaths, local experts said.

Police in Victoria, on Australia's southeastern coast, warned drivers last week that a six-mile stretch of a freeway in the central part of the state had melted.

A spokeswoman for VicRoads, which manages Victoria's road systems, told the Australian Broadcasting Corp. that hot weather caused the asphalt to become "soft and sticky" and the road surface to bleed.

It has also been nearly unbearable for some animals. "Anytime we have any type of heat event, we know we're going to have a lot of animals in need," animal specialist Kristie Harris told the BBC.

It was so hot that possums burned their paws on roofs and roads. Birds needed to be specially rehydrated. Koalas around the region were being sprayed down to keep them cool.

And hundreds of flying fox bats died because they didn't have enough cover to protect themselves from the heat. Animal rescuers in Sydney described "heartbreaking" scenes of dozens of dead baby bats piled on the ground.

As the adult bats sought shade near a creek, babies were left dangling from trees with no means to survive the heat, according to a charity organisation in the Sydney suburb of Campbelltown, home to colonies of flying foxes.

Many were found scattered on the ground. Others died before they made it down.

"It was unbelievable. I saw a lot of dead bats on the ground and others were close to the ground and dying," volunteer Cate Ryan told The Guardian. "I have never seen anything like it before."

Flying foxes have adapted to Australia's warm climate, but these fruit-eating bats are unable to regulate their body temperature when the outside temperature rises above 40 degrees Celsius (104 degrees Fahrenheit). The young ones are especially vulnerable, Ryan told the Camden-Narellan Advertiser.

"They have less heat tolerance," she said. "Their brain just fries and they become incoherent."

Often, she said, they will simply get too hot and fall to the ground while the adults seek out precious shade. 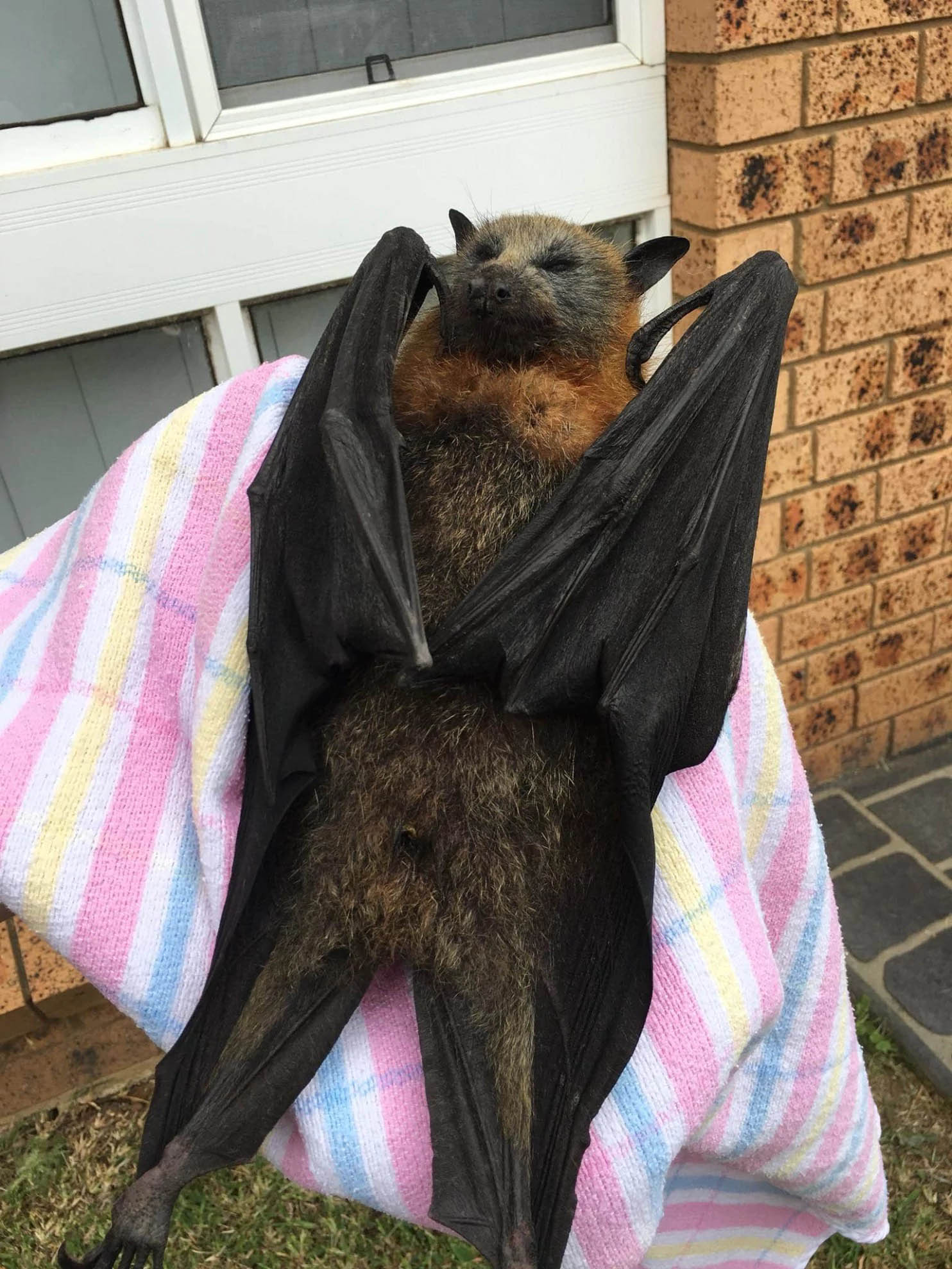 A heat-stricken bat is rescued in Sydney. (Help Save the Wildlife and Bushlands in Campbelltown/AFP/Getty Images)

Wildlife volunteers and rescuers spent Sunday picking up bodies of about 200 flying foxes, most of which were babies, according to the charity Help Save the Wildlife and Bushlands in Campbelltown.

The death toll was expected to rise to the thousands, as many were still dangling from trees and were unreachable to volunteers.

"Many pups were on their last breaths before getting much needed help … There were tears shed and hearts sunken," the charity said Sunday in a lengthy Facebook post.

"It's devastating when a colony like our local one goes down like this due to heat, this colony needs more canopy cover and shaded areas to help with our ever rising hot summers because this episode will surely not be the last."

The bats live in woods and swamps along Australia's east coast and play an important role in pollination and seed transportation.

Experts link the flight of flying foxes to the globe's steadily rising temperature. More than 30,000 flying foxes died across Australia during heat waves between 1994 and 2008, bat ecologist Micaela Jemison wrote in 2014.

Temperatures topped 45 degrees Celsius (113 degrees Fahrenheit). About 100,000 bats across the state of Queensland died during a heat wave in 2014.

"This is of great concern to scientists not only due to the increased risk of these 'die off' events, but also for the long term impact it will have on the recovery of several of these already threatened species," Jemison wrote.

Australia's heat wave - and the United States's bomb cyclone - come on the heels of the second-warmest global year on record since the 1800s.

A new report, pointing to signs of climate change such as the thawing of Arctic ice and intensifying wildfires, says the global average surface air temperature in 2017 exceeded 14.7 degrees Celsius (58.46 degrees Fahrenheit), making last year a bit cooler than 2016, the warmest on record.

But 2016 included the tail end of a strong El Niño in the tropical Pacific, and that bumped up temperatures that year, as well as in 2015, according to the report by the Copernicus Climate Change Service, a European agency.

These findings are echoed in Australia's Bureau of Meteorology's climate report for 2017, the country's third-warmest year on record.

"Despite the lack of an El Nino - which is normally associated with our hottest years - 2017 was still characterized by very warm temperatures.

"Both day and nighttime temperatures were warmer than average … Seven of Australia's ten warmest years have occurred since 2005 and Australia has experienced just one cooler than average year - 2011 - in the past decade," according to a news release.