The latest round of observations of the star Betelgeuse are in, and the dimming that some were reporting as a precursor to supernova has stopped; now, there's evidence of brightening.

This means the star isn't coming to a premature end, as some have hoped; but everyone is still a little bit baffled about why the star dimmed so deeply in the first place.

Betelgeuse, ensconced in the Orion constellation about 700 light-years away, is very elderly for a star of its type. It spent its main sequence years - with an active core fusing hydrogen atoms - as a hot, luminous, bluish-white star around 10 to 25 times the mass of the Sun. These stars live furiously, and have relatively short lifespans.

It cooled, and puffed out into a red supergiant about 40,000 years ago. By now, Betelgeuse has run out of hydrogen in its core, and is fusing helium into carbon and oxygen.

The core has also contracted, which brings more hydrogen into the region immediately around the core, forming a hydrogen shell; this hydrogen shell fuses into helium, which is dumped into the core to fuel the helium fusion.

Eventually, the star's core will fuse heavier and heavier elements, ultimately resulting in a buildup of iron that will cause the core to collapse - and the old star will go kaboom. However, astronomers have predicted that Betelgeuse is still around a few tens of thousands of years from that point.

Prior to its dying explosion, the star is expected to dim rapidly before spectacularly lighting up the sky here on Earth.

Although Betelgeuse does have variable brightness, its recent dimming was far deeper than any observed prior - between September 2019 and January 2020, it dimmed by 25 percent. So it's understandable that people have been getting a bit excited.

Now, instead of the firework display we were all hoping we'd get to see in our lifetimes, even if it was unlikely, Betelgeuse appears to be simply returning to a more normal brightness level, with timing that's consistent with the star's variability cycle.

"Photometry secured over the last ~2 weeks shows that Betelgeuse has stopped its large decline of delta-V of ~1.0 mag relative to September 2019," astronomers wrote in an Astronomers Telegram.

"Based on these and additional observations, Betelgeuse has definitely stopped dimming and has started to slowly brighten. Thus this 'fainting' episode is over but additional photometry is needed to define the brightening phase."

The big question remains: what caused the dimming? Possibilities are being investigated by astronomers. One of these is cooling on the stellar surface. Something really strange would have to be happening in Betelgeuse for this to occur, but it's not impossible. 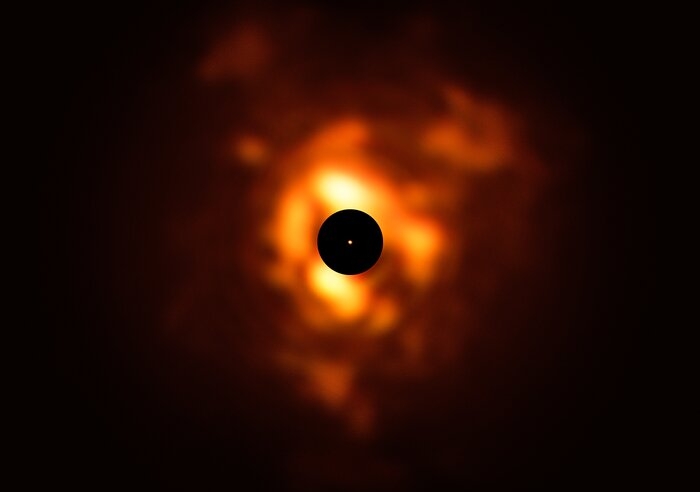 Another is a giant dust cloud being ejected from the star towards us. Stars on the red giant branch create and eject vast amounts of material, long before they go supernova, and infrared images show Betelgeuse surrounded by plumes of dust. You can see them in the image above; the black disc blocks the star, a region about the size of the orbit of Jupiter.

Both of these explanations would be consistent with the asymmetry of the dimming, seen in images obtained in December 2019.

Dust may sound a bit like "a wizard did it" for space, but if the profile fits…

Anyway, how Betelgeuse brightens could shed more light (pun absolutely intended) on the nature of this mysterious event, so scientists are watching very closely.

"Observations of all kinds continue to be needed to understand the nature of this unprecedented dimming episode and what this surprising star will do next," the astronomers wrote.